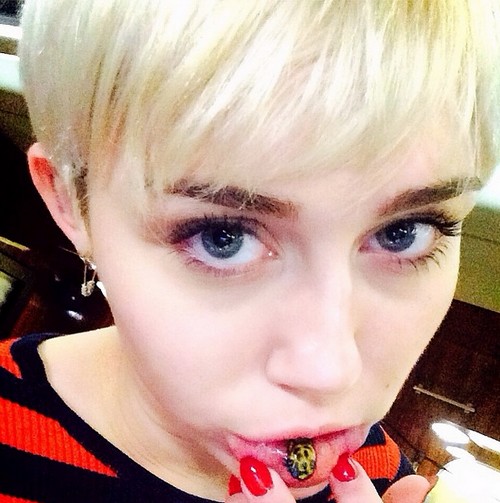 No doubt this has been one of the worst months ever for Miley Cyrus. A bus fire caused her to cancel one of her tour dates back on March 17th and then the star was absolutely gutted by the death of her beloved pooch, Floyd. There have been reports that Miley has spent the majority of April sick in one way or another but according to sources it’s not your typical virus that is taking her down.

On April 7th Miley canceled a show blaming it on the flu but according to the April 21st print edition of Star magazine she was spotted out in NYC on April the 6th carrying her new puppy named Moonie and was completely inconsolable. She was hoping that her new pooch would ease the loss of her other dog but it just isn’t working. Floyd was the pet that Miley had shared with Liam Hemsworth and so it was her last real connection to the man that she, at one point believed he would marry.

Last nights’ Kansas City show was nixed due to an allergic reaction to antibiotics but she wouldn’t have been taking them if she simply had the flu last week. Also that kind of reaction usually includes a rash or serious breathing issues yet Miley posted a photo of herself yesterday looking pretty chipper. Sources seem to indicate that Miley does indeed need some extra rest because she is having an extremely hard time keeping her emotions in check and that is causing her to party a whole lot harder than usual. Doctors have strongly suggested that she rest and get some help in pulling herself together. Do you think that Miley will actually start to deal with some of her demons now or is she just going to take a mini break before going back to her hard partying lifestyle?

UPDATE: It seems from the reports trickling in that Miley is using hard drugs and lots of booze to deal with an emotional breakdown. Needless to say this isn’t working and the April 15 hospitalization is more likely an OD/bad reaction to drugs than anything else. Miley’s tour director Diane Martel seems to be laying the blame at the doorstep of Miley’s hookup buddy Mike WiLL Made It. The incensed Diane tweeted the following after Miley was hospitalized with the putatuve allergic reaction:

These are hard words coming from someone as close to Miley as her tour director, right? And their timing is no accident. We will follow up on this and learn how Diane believes Mike is responsible for Miley’s health/mental health crisis and exactly what is wrong with Miley. One thing we can say is that we people will see that Miley’s promotion of drugs and booze might be wee bit misguided.