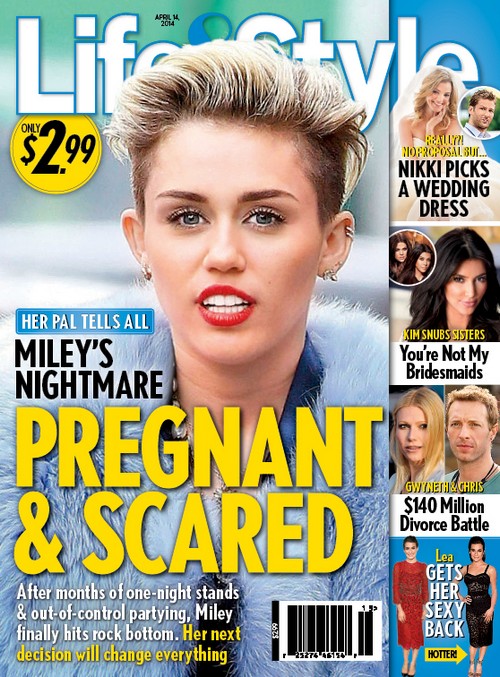 Miley Cyrus has spent the past year playing the role of Hollywood’s resident wild child. Her sound bites alone have raised eyebrows as she has glorified drug use and suggested that young girls would feel better about themselves if they dressed slutty. Sometimes I have to wonder if she is just spewing random thoughts or if she somehow throws this stuff out just to grab attention. After all, you can only twerk on so many midgets. What we do know for certain is that Miley does indeed like to be good and high and she seems to have a turnstile on her hotel room door.

According to the April 14th print edition of Life & Style magazine Miley recently realized that all of her carelessness may have indeed payed off in the form of an unplanned pregnancy, leaving her scared to death. You have to admit, it wouldn’t exactly be a big shock now would it? If she is pregnant then the thing that would ultimately be a surprise, probably even to Miley is who the daddy is.

Update April 3: Miley’s rep says “This is absolutely not true,” when asked if Miley was pregnant. On the other hand with all the talk of Justin Bieber and Miley hooking up behind Selena Gomez’s back lately, who knows what the future might hold!

Also in the latest issue of Life & style you can learn about that nifty wedding that Kim Kardashian is planning. Apparently Kanye’s baby mama has decided that those sisters that she is so close to aren’t exactly bridesmaid material! Can you even imagine the uproar that has caused within the family? Speaking of weddings, Nikki Ferrell has picked out a wedding dress of her own for when she walks down the aisle with Bachelor douche lord, Juan Pablo Galavis. Of course we’re all pretty sure that is one of those fairy tales that’ll never happen, right? Tell us your thoughts in the comments below!