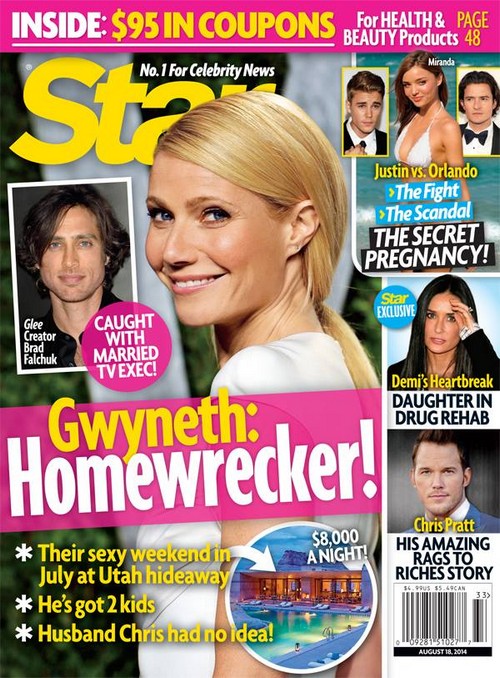 This Orlando Bloom – Justin Bieber – Miranda Kerr love triangle never ceases to be hilarious. First of all, Justin’s still a kid, which makes it doubly ridiculous that Miranda not only looked twice in his direction, but actually slept with him. And if she slept with Justin, then I’m guessing the rumors of her sleeping with Leonardo DiCaprio and a plethora of other men were also true. And now, according to the cover issue of Star Magazine, Miranda’s actually concealing a ‘secret pregnancy’, most likely from Justin’s spawn.

Miranda and Justin reportedly hooked up at the Victoria’s Secret Annual fashion show last year, when Miranda and Orlando were still together. In this particular scenario, if Miranda got pregnant, then she must have gotten rid of any evidence quick. There’s also the possibility that she and Justin carried on their fling, but I’d like to give her a modicum of benefit, at least. After all, she may have been a horrible wife and a serial cheater, but she’s clearly a devoted mother – and no mother in their right minds would give their child a sibling that was half spawn of Justin freaking Bieber.

Star’s cover also focuses on Gwyneth Paltrow‘s new relationship with Brad Falchuk, the co-creator of Glee. Apparently, Gwyneth is a homewrecker who stole Brad away from his wife and children. Surprise, surprise, celebrities have shaky moral convictions, even if they keep preaching the benefits of healthy living.

The report also claims that Chris Martin has no idea about Gwyneth’s new affair with a married dude, but as if he cares. He’s dating Jennifer Lawrence, and let me tell you, he’s bragging about it to anyone and everyone. Clearly, Chris has a type: Oscar winning blondes who get way too much attention for trivial things.

Demi Moore is also going through some parental heartbreak right now, due to her daughter Tallulah Willis entering drug rehab. It’s not an unusual situations that most Hollywood parents find themselves in, but that says a lot about their industry, doesn’t it?