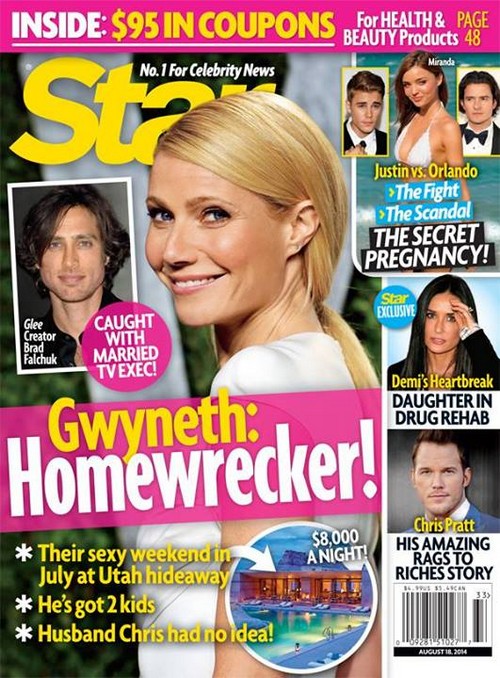 Ah no wonder Gwyneth Paltrow has been getting along really well with her soon to be ex husband, Chris Martin. It’s not because the two are inching towards a reconciliation as has been insinuated. Instead it’s actually because Gwyneth has sunk her fangs into a new man- the married type! By the way, this isn’t the first time that the actress has ignored girl code and set her sights on someone elses’ husband either. Instead it seems to be a pattern.

According to the Aug. 18th print edition of Star Magazine Gwynnie has been romping with Brad Falchuk, the creator of Glee. Not only does he have a wife but Brad also has two kids that he split on last month so that he could vacation in Utah with Gwyneth. Sources say that Chris had absolutely no idea that his ex was spending quality time with another man- let alone a married one! Already Gwyneth has been dubbed the home-wrecker in Brad’s now shaky marriage. My guess is that she won’t care too much as long as Gwyneth gets what she wants.

Like mother like daughter? That could be the case if the rumors are true for Demi Moore. We’re hearing that one of her young daughters is currently in a rehab facility getting herself cleaned up. Speaking of clean, nothing about the drama that has gone down between Justin Bieber, Orlando Bloom and Selena Gomez would be described as that. There were rumors that Justin hooked up with Orlando’s then-wife, Miranda Kerr several months ago. Could a pregnancy have been tangled in all of that drama? We have heard that Biebs was in part to blame for Bloom and Kerr’s marriage ending but is it worse than we thought? You’ll have to grab the latest issue of Star magazine to find out but in the meantime, do you think Glee’s Brad Falchuk will leave his wife for the likes of Gwyneth Paltrow? Tell us in the comments below!