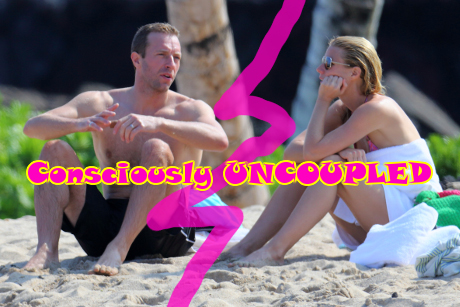 Gwyneth Paltrow may be an accomplished actress, but this talent isn’t limited to the big screen. Her latest acting gig may have been her best role yet, though she won’t be winning any awards as a result.

The now defunct marriage (or “conscious uncoupling” for the pretentious) of Gwyn and Chris Martin was likely one of Gwyneth’s more challenging roles, and her hubby of ten years no longer wanted to play the part of her of adoring husband. Sources say that the couple had an open marriage and had actually been on and off for years. It is nothing new in Hollywood to have an open marriage. Sometimes it is just easier to stay together and fake it then to divide up all the assets, split time with the children, and face the media. Gwyneth obviously believed that because she pushed Chris into sticking it out, preferring not to go public with their split – this according to Page Six. Now, as backlash surrounds her and she has been portrayed as the one who initiated the split, her already tarnished reputation is taking even more of a beating.

Chris was actually the one who initiated the split this last time. He had put up with Gwyneth’s plan far too long and when he saw that the charade cost him someone he fell in love with, Alexa Chung, he had had enough and told Gwyn it was over. After trying for years to please his pretentious wife, he stuck in there many times when he would have rather left, but Gwyn kept telling him it was better for the children if they had an open marriage while still remaining a couple in the public eye. Chris is a romantic and a passionate person, while Gwyneth is cold and much more rigid. When Chris finally felt like he met his soul mate in Alexa, he was devastated after she left him for fear of looking like the “other woman.”

Chris finally had had enough of Gwyneth’s act and wants to try things again with Alexa. Many of the couple’s close friends knew about the arrangement, some having a similarly-arranged marriage of convenience. This gave Gwyneth even more reason to contact all her friends begging them not to speak to Vanity Fair about her for an article they had planned to write that would have likely exposed a lot of her secrets. Potentially, her broken marriage could have been leaked and she couldn’t have that.

Now, Gwyn is fighting back by allegedly leaking stories to the press that he cheated on her. She cannot stand that he is being made out to look like the good guy in all this. What she may not realize is that her popularity had already sunk pretty low given her arrogance and unrealistic understanding of life for the lower and middle class.

This split is NOT going to be pretty! At least we now know why Gwyneth freaked out over the investigative piece Vanity Fair attempted.