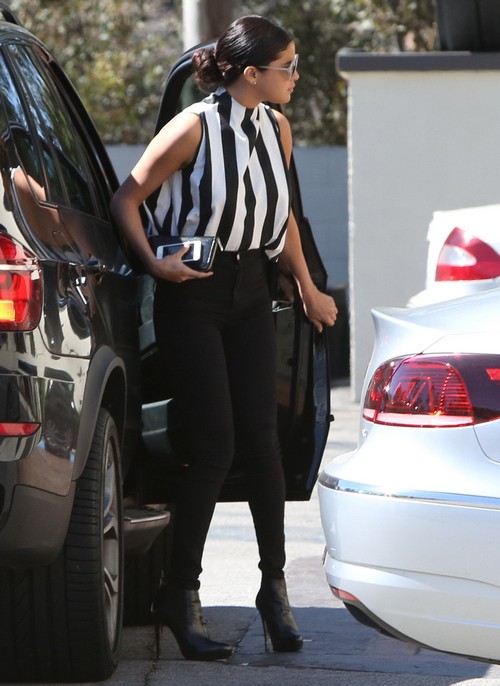 Selena Gomez wants to have revenge sex with Orlando Bloom. Yes, it’s CDL Love Triangle time! Orlando Bloom and Justin Bieber’s bitch-punching in Ibiza (who the f**k fights in Ibiza?) had an adverse effect on Gomez’s drug-addled puffy interior. They allegedly got into a fight about Gomez and Miranda Kerr (Bloom’s ex-wife). Hell hath no fury like a man-child and an ex-elf scorned.

Justin bumped into Orlando at a restaurant in Ibiza and decided to antagonize him. Orlando reportedly refused to shake Justin’s hand, which led to Justin mouthing off about his hookup with Miranda Kerr last year, telling Orlando, “She was good.”

Ouch. Of course, Orlando probably heard about Justin’s affair with Miranda[especially since he and Miranda were still married at the time], and he understandably got furious. He punched Justin, but not before Justin started shrilly shouting at him, ‘What’s up bitch?‘

A fed-up and pissed off Gomez texted Bloom shortly after The Battle of Ibiza and requested an official “Revenge Booty Call”. Bloom refused, because he didn’t want to “stoop down to Bieber’s level.” He also is probably aware of Selena’s alleged drug and alcohol problems and need for rehab.

Gomez threw a tantrum and an iPhone. Then she allegedly consumed more drugs and booze.

An exclusive source told CDL,  “Selena most probably wanted to use Orlando to get back at Justin. She’s an extremely jealous and possessive person. We were best friends for a while, so I know how her mind works. Selena is an excellent manipulator. He’s not responding to her texts anymore, because she doesn’t know when to stop…”

The moral of the story:

Revenge sex is a bad idea. Rehab is a good idea.

What do you think? Will the love triangle spiral out of control? Will Bloom hook up with Gomez? Why is Bieber such a bitchy little brat? Let us know your valuable thoughts in the comments below. No haters allowed.

Troubled actress Selena Gomez stops by an office dressed like a referee in Los Angeles, California on August 5, 2014. Rumors are swirling that Selena is heading back to rehab after she has gotten into some hard drugs after breaking up with Justin Bieber again.