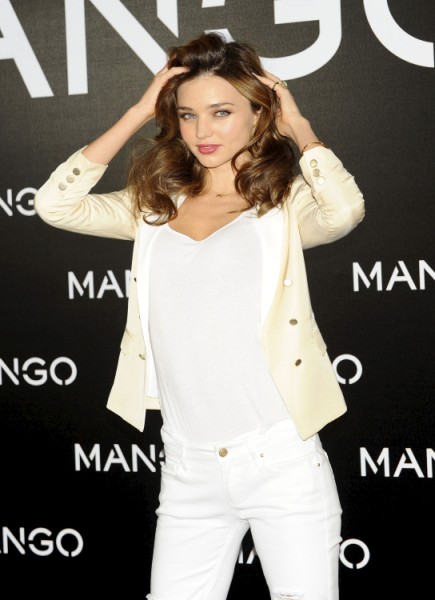 Who would have thought Miranda Kerr was such a dirty ho bag? Not me, that’s for sure. She’s so innocent looking and she’s a Victoria’s Secret Angel for crying out loud! Doesn’t that count for anything? Apparently not because there are some blind items out there that have Miranda’s name written all over them and they ain’t pretty.

According to the riddle, courtesy of Lainey Gossip, this woman in question has a baby and has been fighting break up rumors for awhile now. She’s been VERY visible to the press and just recently stepped out with her cuckolded man to show the world that they are still going strong. However… “My sources confirm that there was a boy, a very young, very famous, pop boy with his own fragile love situation who she f-cked for sh-ts and giggles. Just 2 nights later, it was another very famous former pop boy (of sorts) 20 years older who, obviously, specifically targets her small demographic. One night only. Those would be her more famous indiscretions. But they say she’s been cheating all over the place and all the time.”

So obviously we know that the woman is Miranda and the “former pop boy” is Leonardo DiCaprio. That hook up has been well documented and right up Leo’s alley. She’s a model and he’s Leonardo DiCaprio. That’s all the evidence I need. But the other boy with the fragile love situation? Justin Bieber? Who else? The only other name I could think of was Harry Styles but I don’t see his current hook-up with Taylor Swift as fragile. And we do know that Miranda and Bieber were partying together at the Victoria’s Secret fashion show a couple months ago. Remember? That was the time all the Selena Gomez break-up shiz was going down and Justin was supposed to be cheating like crazy over his broken heart. Poor Barbara Palvin! She took all the hits but really Bieber was banging Miranda Kerr on the sly. This whole thing is so gross! He has a tattoo of an owl! Miranda should be ashamed of herself!

Do you buy Miranda Kerr cheated? I definitely believe the Miranda Kerr/Leonardo DiCaprio stories over the Miranda Kerr/Justin Bieber stories but that’s just because Miranda’s chubby cheeks are so sweet and virtuous. If I stop looking at her pictures long enough I could sort of see her screwing Bieber in a champagne-dazed after party. Still… why does she stay with Orlando if she continues to cheat? Is she a girl who just likes the thrill or is he too whipped to care?