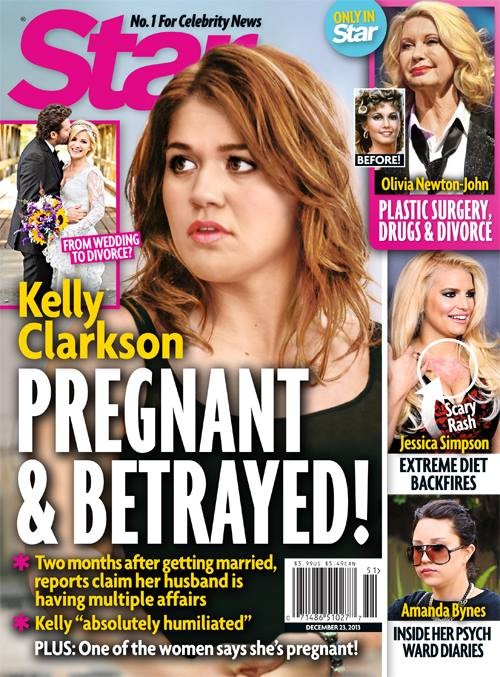 Kelly Clarkson seems to be one of those ladies that the fans really pull for. She has in recent years tried to steer clear of drama and has managed to steer herself clear of the pitfalls that seem to plague many of her colleagues. When she finally hooked up with Brandon Blackstock it looked like even her love life was falling into place after years of setting her sights on various versions of Mr. Wrong. The couple married just two months ago and a few weeks later Kelly happily announced her pregnancy. She’s such a normal girl that I think we were all thrilled to see her so happy, which is why the recent wave of press is even more crushing for the singer.

After about a week of rumors circling, the Dec. 23rd print edition of Star Magazine is the first to take a close look at Kelly’s current drama. Not one but two women have come out of the woodwork claiming to have had affairs with Brandon. One of these ladies is currently pregnant and apparently claims that Kelly’s husband could indeed be her baby daddy! While Kelly has denied that the rumors are true, interestingly enough, Brandon actually has not once tried to quash them!

Amanda Bynes was recently released from the psych ward and of course, there are diaries that she wrote while under lock and key. Star has some of the personal details on what Amanda confessed before being released back into normal society. Grease fans still have a soft spot for Olivia Newton John but it seems that her life is a train wreck. According to the latest issue aside from her obvious plastic surgery mess, she is dealing with addiction issues and a divorce. You’ll want to grab the new Star magazine for sure, but in the meantime, do you think that Brandon is guilty of cheating? Tell us your thoughts in the comments below!