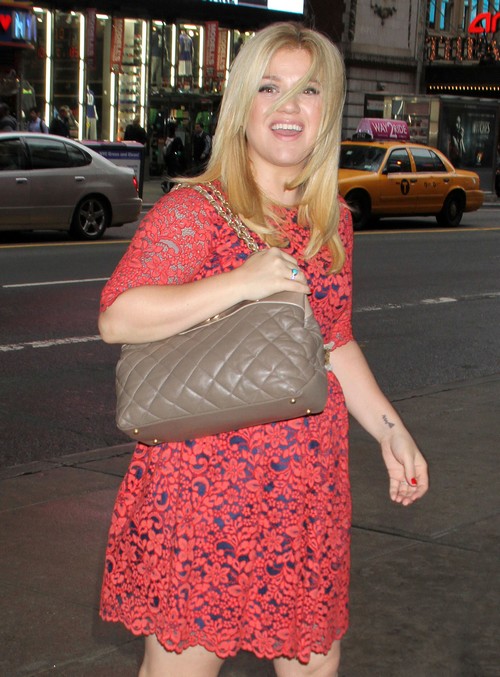 Kelly Clarkson is pregnant! The world-famous singer announced the news via Twitter this morning, writing, “I’m pregnant!!! Brandon and I are so excited! Best early Christmas present ever :)”

Kelly and longtime beau Brandon Blackstock got married last month in a lavish wedding ceremony, and it looks like they got the best wedding gift they could ask for: a baby. Kelly’s always been very vocal about wanting children, once telling a radio host in an interview, “I want babies! Everybody keeps saying, ‘What do you want for Christmas?’ And I’m like, ‘I want to be pregnant.'”

Well, she certainly got her wish. The timing of the announcement is very interesting, and some people are speculating that Kelly and Brandon must have known that she was pregnant when they got married. Since it’s only been a month, they either just found out about the pregnancy, or they’ve known for a while but just kept it under wraps to not detract from the wedding. Nobody wants their wedding to be called a shotgun wedding in the media, even though Kelly and Brandon do seem very devoted to each other.

This will be Brandon’s third child, since he already has two other kids from a previous marriage. And although it’s Kelly’s first child, it probably won’t be her last – she’s gone on the record about wanting a big family, and it seems that they’re well on their way to making that come true.

What do you guys think about Kelly’s pregnancy news? Do you think she’s known for a while? Let us know your thoughts in the comments.