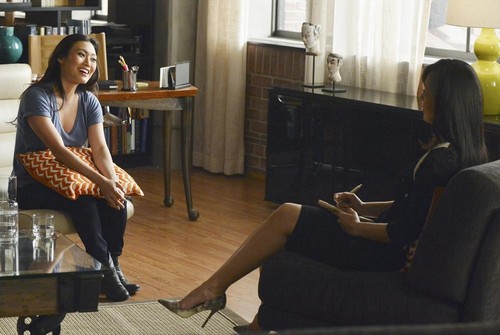 Tonight Mistresses returns to ABC for another episode in its second season called, “Friends With Benefits.” On this evening’s episode, Joss attends a charity event to acquire new clients, but she finds a potential suitor instead. Meanwhile, Savi forms an unexpected connection with a new man; April has Daniel meet her friends; and Karen’s bad luck in the dating game leaves her blue.

On the last episode Joss was caught in the middle as mediator when Savi and Harry – still not talking to each other — clashed over selling their home. Back at the office, Toni (guest star Rebeka Montoya) continued to be a thorn in Savi’s side. When April learned she had to throw a lavish party for the parents at Lucy’s expensive new private school, it was Mickey (guest star Joseph May) to the rescue with a bash that no one would soon forget. Did you watch last week’s episode?  If you missed it we have a full and detailed recap, right here for you.

On tonight’s episode Savi finds a surprising connection with a man (Jason Gerhardt as Zack) other than Dom. After a series of dating disasters, Karen hits rock bottom emotionally. April introduces Daniel (guest star Ricky Zamora) to the gang. Joss shells out big bucks so she and Harry can attend a pricey charity event to drum up business, but ends up attracting something else instead, the attentions of a handsome plastic surgeon (guest star Justin Hartley).

Tonight’s episode begins with Karen meeting Sean in person, who she originally met online. He turns out to be creepy when he tells her he Googled her and then keeps asking question after question about the horrible past experience that she does not like to discuss. Even after she tells him so, he continues to ask questions, seeming very intrigued by it all.

Joss and Harry get invited to a major networking opportunity but have to come up with 5 thousand dollars to attend. Joss is pushing for it because she sees the potential. Meanwhile, April and Daniel have another encounter. This time they are at April’s house and Daniel asks April how much she missed him in between kisses. He tells her he wants to know her better, and know her friends after he sees her disregard a call from Joss. He is worried she is keeping him a secret.

Savi is at home talking with Zach, who seemed to be a stranger at first, but who identified himself to her as Zach from the accident. Savi is taken aback but invites him in and they talk about the tragic accident over coffee. He says he has a metal rod in his spine and can no longer work construction. He said he is lucky he’s not dead. He tells her that he kept seeing her name all over the paperwork and felt he had to meet her. He asks if it was as hard for her as it has been for him. Savi asks if he is seeking money from her and he gets upset saying that was in no way his intention and walks out.

Karen, Joss, and April have some girl talk at the shop. The girls give Karen advice on ways to meet men. Karen is not buying it and says she should just throw herself into her work. April shares that Daniel wants to meet her friends and she tries to plan a dinner.

Dom goes to see Savi and tells her his idea to come out as a couple. He feels it is better to do that than to get caught. Savi is good with it but was caught a little off guard as she was searching for details on Zach when Dom walked in. They make plans to talk to HR.

Joss meets with Harry again as they plan their big night. They need guests to fill their $5000.00 table to share the expense. Harry asks if Karen and April are going and Joss admits she didn’t invite them because if she did she’d have to invite Savi and she knew that would not work. Harry seems sad but understanding.

Karen meets with her patient and tries to get her to open up about fights with her family that led to her suicidal thoughts. She shares that she is an escort but tells that it is quite mainstream now and helps her pay the bills. She tells how fun it is and how great it is to make money. When she tells Karen that she’s never spent a night alone, it piqued her interest.

Savi and Dom meet with HR about their relationship. Savi is later and they are stressed about coming out, but they share the news and the HR woman begins to discuss policies. Meanwhile, Joss meets and chats with one of the sexy guests at their table. She realizes she has been set up on a blind date which makes things very awkward. Joss is so upset with Kara for not telling her about the set up.

Later, Savi, Karen, and April talk before Daniel meets them for dinner. April is going through the ground rules for what can be discussed. After April tells the ladies all the things they cannot discuss, it leaves them with little conversation and everyone is scared to share something they should not. As Savi and Dom share their ‘coming out’ news, Karen begins to look at both couples and see the way they interact and immediately feels a desire to be in a relationship as well. She excuses herself and Savi follows her. Karen cries to her and shares that she is lonely. Savi tries to comfort her, but she feels there is no hope and she’ll be alone forever.

Later at home, Savi shares her conversation with Karen with Dom. Dom tells Savi how grateful he is to have her. Dom opens up and tells Savi how Toni came on to him. He tells Savi she was right and Savi becomes even happier about going to HR.

Joss begs her date to stop looking so sad and they end up chatting about the awkward date that only one of them knew about. Joss finally starts to let loose and actually begins to enjoy his company. April and Daniel talk after dinner and he asks her why her friends seemed so distant and she lets the cat out of the bag by sharing that they were withholding some private things from her past. He gets upset at the fact that she still feels the need to be closed off from him. He wants to end the night early despite April’s objections.

The next day, Joss gets a gift from her date the night before…a Labrador, which was a bit of an inside joke from the night before. Karen meets with her patient again and, this time, goes right in on the questions about what it is like to be an escort and she seems to be more and more intrigued at the thought of all the love and attention her patient gets from clients.

Savi opens up to Zach when he comes by to inquire about the concert tickets he received as a gesture from her. She cries to him about losing her baby and all the trauma she has gone through knowing she may never have the chance again. He is taken by her emotion and the two hug in what is a very emotional meeting. When Dom later asks about her day as they are lying in bed, she is deep in thought, but doesn’t share and simply replies, “uneventful.”

April goes to see Daniel and shares a little bit about her past, asking if that can be enough for now. Apparently it can because he takes her inside his apartment. He may have a secret of his own as he gets a phone call from a “Jessica” as April leaves the bed and he tells her he can’t talk right now and quickly hangs up. Can’t wait to see where this one is going.

Karen decides to see what it feels like to be an escort and follows the step-by-step actions her patient described, matching the same scenario that sounded very enticing to her. As she slowly walks through the restaurant and to the bar, she is approached and replies that her name is “Jennifer” when asked by a man that joins her.

Wow! This is making me desperate for next Monday to hurry up and get here! Tell us what you think about tonight’s episode below!