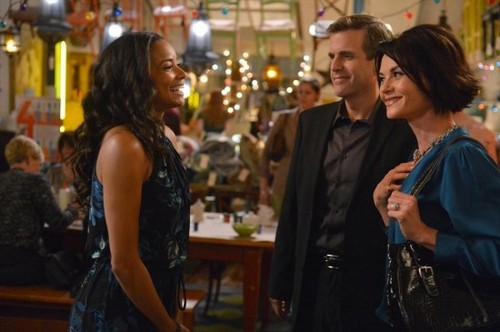 Tonight Mistresses returns to ABC for another episode in its second season called, “Open House.” On this evening’s episode, April must host a party for the parents at Lucy’s school, so Mickey organizes a memorable event. Meanwhile, conflict erupts between Savi and Harry when they prepare to sell their home; and Toni makes life at work difficult for Savi.

On the last episode April threw caution to the wind and began a blissful affair with handsome artist Daniel Zamora (guest star Ricky Whittle). Meanwhile, Joss and Harry seemed to clash over everything when they’re hired to throw a lavish party for a wealthy housewife (guest star Krista Allen). Savi returned to the firm and bristled at sharing an office with stunning new attorney Antonia Ruiz (guest star Rebeka Montoya), who appeared to have no sense of personal boundaries. Karen faced some ghosts from her past when she’s called upon to testify at Elizabeth Grey’s parole hearing. Did you watch last week’s episode?  If you missed it we have a full and detailed recap, right here for you.

On tonight’s episode Joss is caught in the middle as mediator when Savi and Harry – still not talking to each other — clash over selling their home. Back at the office, Toni (guest star Rebeka Montoya) continues to be a thorn in Savi’s side. When April learns she has to throw a lavish party for the parents at Lucy’s expensive new private school, it’s Mickey (guest star Joseph May) to the rescue with a bash that no one will soon forget.

Joss plays mediator as Savi and Harry clash over selling their home; Toni continues to bother Savi; Mickey helps April with a party for the parents at Lucy’s new school.

Tonight’s episode begins with Toni laying it on very thick with Savi as she tries to convince her that Dom has been flirting with her. Savi tries to put her off and says she cannot be bothered worrying about men as she is in the middle of a divorce. Toni suggests they go out on the town, but Savi proves she is not interested in doing anything with her.

Shortly after, Joss comes to visit Savi and passes on a message from Harry about painting of their house. Savi gets angry because they are ready to have offers and shouldn’t be putting any more money into the house unnecessarily. Joss doesn’t want to be in the middle and Savi agrees because she thinks she and Harry need to talk directly. When Savi cannot get in touch with Harry to tell him to call off the painter, she decides she needs to quickly run to the house to tell him. She tells Dom she needs to leave but will be back shortly.

April is supposed to be planning a party for parents of the kids at Lucy’s school but she is not wanting to go through with it as she has no plan, no theme (other than pizza and beer), and really isn’t interested in making any friends. After being told she will be committing social suicide for Lucy, she realizes she must host the party.

Karen meets with Jacob and they have a nice talk. She updates him on her status. Jacob apologizes for coming on too strong in the past and mentions his romantic feelings, Karen shares she had no idea. Jacob cannot believe she didn’t know but she says she had no idea and is totally thrown off guard. Joss, meanwhile finds out from Harry that there was an offer on the home. He is excited about the all cash offer, but Joss takes one look and sees that it is way under what they were asking and tells Harry that Savi will never go for it. Harry tries to talk Joss into convincing Savi that it is a fair offer. Joss is fed up with being the middleman and tells Harry she will not convince Savi to take the offer because it is something they need to work out together.

Savi gets back to the office MUCH later than she originally planned and Dom is not happy. He shares that Toni took her place in the meeting. Savi was understanding about it but just a slight look of unease in her eyes led Dom to tell her not to think of going there. He stands up for Toni and tells Savi he never should have let her leave. He tells her she took advantage because of their relationship. She assures him that was not the case.

April’s party turns out to be a little more risqué than she’d have ever thought it would be as shirtless men serve jello shots and the music is blasting in her store. April gets approached by a guest at the party and he asks her out. She declines, mainly because of Daniel, and gets scolded for putting all her eggs in one basket.

Karen and Joss go to work out and Karen shares how off she was about Jacob as she had no idea he was interested in her.

Savi is visited by the real estate agent who has an offer ready to be signed. Savi cannot believe Harry accepted an offer without her consent. The agent thought she knew and apologized but obviously isn’t happy either. Savi says to hold off until she can speak to Harry directly. She leaves him a voicemail as Toni sits nearby, taking everything in.

April meets up with the party guest, Steven, for coffee and finds him a little strange and overly aggressive. He tells her how happy he was to talk as adults and not talk about their kids. He then gets up to say goodbye after she grabs her purse and stands with a hand extended for a hand shake. He doesn’t shake her hand, however, as he goes in for a kiss. She puts him off and tells him it is way too fast. She gets out of there as fast as she can.

Toni is busy plotting and wears the sexiest dress she could find as she continues to try to temp Dom. She tells him how it has been hard sharing an office with Savi because of her constant personal calls to “a Harry or someone.” She says it is very distracting. Dom understands and tells her to give Savi a break as she has been there a while and they won’t share an office forever. She admits to being jealous of the extra attention he gives Savi and he tells her it is nothing personal. Never missing a beat, Toni tells him she is interested in more and Dom replies that it is not possible, most especially because he is her boss. Looks like Dom will soon be having a conversation with Savi about their relationship. This girl is wicked!

Karen is all dressed up and Joss is on hand to tell her how gorgeous she looks as she prepares for a date. Her date is there to pick her up but Karen is very nervous. Good thing Joss is on hand to give her the courage she needs. Savi goes to see Harry and the two end up in a heated conversation. Harry is still very hurt and can’t stand being in the house. He cannot stand to have the constant reminder of the marriage he lost. He yells at Savi about giving her two chances and still choosing her while she chose Dom. He is so broken up inside and Savi begins to break. She admits to her mistakes and reminds him that he’s made some as well. The two calm down but after such an emotionally charged fight, they both seem hurt and exhausted.

April is stressing about whether or not Daniel will call…now more than ever after her date from hell. Karen and Joss meet for lunch and Karen shares details from her date which she thinks was so-so. Joss is at the house later and sees Savi outside drinking coffee. Savi tells her that she just could not go into work. She tells Joss about the fight with Harry and the argument with Dom. She tells Joss that she did accept the next offer that came in because she cannot keep holding on to something that is no longer there.

April welcomes the parents of Peyton, who is Lucy’s friend, for cocktails after telling Peyton she wanted to meet them. Imagine her surprise when after welcoming Peyton’s mom, she sees Peyton’s dad walking up with some wine….yep…it is STEVEN from before, who she thought was single (and a jerk). Later when Lucy asks about how her friend’s parents where, she says they were wonderful. As they have some girl talk and April gives Lucy a phone as a gift, Lucy asks who Daniel is who is texting her as a text came through just as Lucy was fixing some settings on April’s phone. April grins ear-to-ear.

Karen debates calling Jacob, the man she really wants the date with. After her mediocre date with the other guy, Joss encourages her to ask out someone she really wishes she could go out with. Karen summons up the nerve to call Jacob and ask him out. He turns her down because of the long history between the, She is so embarrassed and quickly hangs up the phone.

Dom calls Savi to check in on her and they clear the air from earlier. Dom does not share anything about the encounter with Toni, but tells Savi he’ll be working at the office while it is quiet and invites her to join. She says maybe she’ll come by later. They hang up the phone and Savi opens the door after she hears someone knocking. It is a man, from the open house the other day. She shares that the house is no longer available, and he tells her that is really not why he is there. He tells her he came to meet with her and knows her name. He tells her they need to talk. She looks terrified.

Previews for next week show Savi hugging her uninvited stranger. It is going to seriously heat up next week, so don’t miss our recap!