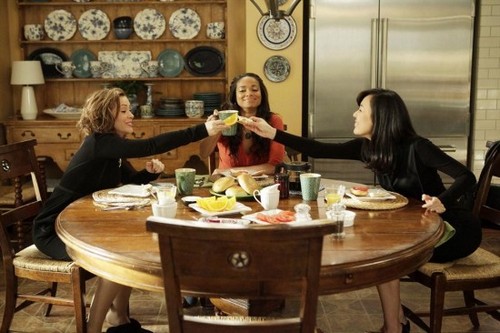 Tonight Mistresses returns to ABC for another episode in its second season called, “Boundaries.” On this evening’s episode, Savi must share an office with a new attorney who doesn’t respect her personal space. Meanwhile, April begins an affair with an artist; Joss and Harry quarrel about a party they’re planning for a rich housewife; and Karen testifies at a parole hearing.

On the last episode eight months later, Savi, had cheated death, she made the most of her second chance. Karen struggled to rebound from loss, both personal and professional. April’s life got interesting when old friend, Mickey (guest star Joseph May), returned and pushed her to make some changes and Joss tried her hand at a new job, party planner to wealthy Angelenos.  Did you watch last week’s episode?  If you missed it we have a full and detailed recap, right here for you.

On tonight’s episode April throws caution to the wind and begins a blissful affair with handsome artist Daniel Zamora (guest star Ricky Whittle). Meanwhile, Joss and Harry seem to clash over everything when they’re hired to throw a lavish party for a wealthy housewife (guest star Krista Allen). Savi returns to the firm and bristles at sharing an office with stunning new attorney Antonia Ruiz (guest star Rebeka Montoya), who appears to have no sense of personal boundaries. Karen faces some ghosts from her past when she’s called upon to testify at Elizabeth Grey’s parole hearing.

Tonight’s episode begins with Savi getting ready for work as Dom encourages her and compliments her sexy look. She is very uptight and nervous about what people will think about her mental capabilities after her coma. Dom also adds fuel to the flame when he tells her that new employee Toni doesn’t have a thing on her. Ohhh did he open a can of worms! Savi looks like she is ready to have a breakdown.

Jos is going to hire Harry and April is very surprised. As April asks for details, she gets a call from her smoldering artist and ends up telling Josslyn that they had a night of passion after her hottie calls to tell her she left an earring at his place. April begs Jos to go pick it up because she feels so bad about something that felt so right a few nights ago. Harry calls Jos to tell her he booked a catering gig for them already.

Karen’s doctor informs her that Elizabeth Grey is being released from prison on parole. He asks her if she wants to testify or if she wants to talk about her feelings about it. She says she is fine, but walks out and is visibly shaken.

April goes to Daniel’s to pick up her earring and ends up picking up something else. The two cannot keep their hands off of each other from the moment he opens the door. Meanwhile, Savi is not receiving good vibes from Toni and senses she is hot for her man. Toni looks like she is plotting away as she sees Savi and Dom talking.

Jos and Harry meet with their client to discuss the fundraiser. Jos is not happy about the shameless flirting between the client and Harry and her over-the-top plans that Harry seems to have already talked to her about and given the green light.

April enjoys some home-cooked food hand fed to her by her hunky artist after another encounter. She feels awkward about him feeding her and he, rightfully so, thinks feeding her was probably the most innocent thing he’s done!

Toni finds a way to be included in a client meeting meant for only Dom, Savi, and the client. Savi is clearly uncomfortable with Toni’s forwardness and doesn’t like how she is stepping on her toes! At the hospital Karen starts to feel uncomfortable after hearing Elizabeth’s voice. As she waits for her client, she has a vision of Elizabeth holding a gun to her and just as she gasps for air, her patient knocks on the door for their appointment and she snaps out of it.

Jos is going crazy trying to collect items for the fundraiser. She keeps getting texts with more outrageous requests and begs the salesperson to call April to get her down to her shop to help her!

At Daniel’s place, he wants to go for round two, this time with paint and on a canvas. At the office, Toni sings as she works late into the night. Savi throws on headphones. Toni admits to being pushy, and agrees to Savi’s idea to “timeshare” the office. They will take turns using the office. When Toni agrees to this idea, Savi is happy and appreciative. That is until Toni gets up to leave and whispers that she wants to get some of Dom and this gives her a perfect excuse to spend more time with him. Toni walks out as Savi picks her mouth up off the floor.

Karen is recording patient notes but keeps having flashbacks of Elizabeth and recalls the details of her scaring confrontation. She screams out, but realizes she is home alone and Elizabeth is not there. At Daniel’s place, April slowly creeps out of bed as he sleeps. She looks around and sees a picture of a beautiful home. He tells her about his mother and what she dreamed of for him.

Karen and Savi have lunch together and Savi tells Karen about Toni. They talk about Elizabeth’s potential release. Karen tells Savi that Elizabeth haunts her. Savi encourages her to show up and testify or it is like giving a vote for her release. Karen knows she should but is terrified.

Jos and Harry argue over the client’s impossible demands as Jos is frustrated with Harry’s laid back attitude while he is asking her for the impossible. At the office, Dom tells Savi they got the case. Savi shares that she cannot work with Toni. She tells Dom about what Toni said and cannot believe his nonchalant attitude over it. He shares that because it is ridiculous and won’t ever happen, and because he is with her, there is no need for Savi to waste time worrying about it.

Savi reminds him of her marital status when they first got together and says that it can happen. She tells him she needs to watch her back and, basically, that everyone needs to be careful. He is really thrown as he had no idea what he was walking into when he came to share the news with Savi.

Harry and Jos were a hit and the client even tells Jos how happy she is with her work. She hugs them both and thanks them for a wonderful job, declaring that she’ll post something at their website. Meanwhile, Karen takes a big step and goes to see the review board to testify against Elizabeth’s release. She is walking down a hallway at the facility.

As she walks down the hallway, Elizabeth calls out to Karen. She summons up the courage to respond and go in to talk to her. Elizabeth cries and apologizes, but Karen is still tense. Elizabeth tells Karen that her punishment is that she killed her son. She says she just wants out for one day to see her son’s grave. That is all she wants. Karen tells her it is beautiful and always has flowers.

Karen tells her girlfriends left without testifying as she says she is no longer scared of Elizabeth. Her release was denied anyway. Harry comes to apologize to Jos. She tells him how condescending and mean he was. He gives her a heartfelt apology and praise. April is sad about Daniel, thinking she’ll never see him again after the way he acted when she brought up the fact that she has a daughter.

Later, at her shop, April is told she had a delivery. Her painting that was made by her and Daniel was left for her with a note. Meanwhile, Savi goes to meet with Dom and wave the white flag. The two make up and kiss in his office. Through a small part of the window, Toni sees just enough to know what is really going on between these two.

Meet us here next week as we recap the next episode that is sure to be steamy hot as Toni lays it on even thicker than before!