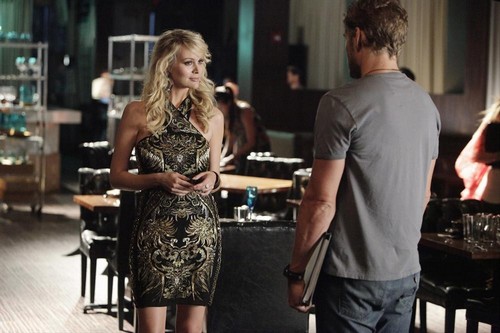 Tonight on ABC their new drama MISTRESSES continues with an all new episode called, “Choices.” On tonight’s show April deals with disloyalty in her life. Meanwhile, Joss shares a surprising revelation; Karen receives a tempting offer from Jacob; and Dom wants to turn the tables on Toni.

On the last episode April learned the identity of the man who had been stalking her (guest star Jason Gray-Stanford). Karen blurred doctor-patient boundaries when she offered a helping hand to Anna, Toni’s hidden agenda became clear and had a devastating impact on Savi and Dom and when Scott took Joss home to meet his big, extended family, Harry planted some seeds of doubt that she might not measure up. Did you watch the last episode? If you missed it we have a full and detailed recap, right here for you.

On tonight’s show April faces the ultimate betrayal, Joss shocks everyone with a big announcement, Jacob makes Karen a tantalizing offer and Dom is determined to beat Toni at her own game.

Tonight’s episode is going to be an exciting one filled with drama that you won’t want to miss – the producers know they need to get you interested, therefore you can expect a great show. Be sure to tune in for our live coverage of ABC’s Mistresses tonight at 10 PM EST! While you wait for our recap enjoy the sneak peek video below and leave a comment.

Tonight’s episode of Mistresses begins with April confronting Daniel at the police station, he admits that he is working for the FBI. April is furious, and realizes that their entire relationship was set up. She storms out of the police station.

Karen is looking through the help wanted ads with Anna, there really aren’t too many jobs out there that pay decent for people without a college degree. Anna admits that she would like to move back to Korea, but her parents think that she is happily married and she doesn’t want to tell that that she has been lying this entire time.

At the office Dom runs in to Toni and tells her that she “looks like a million bucks.” Then he calls a man named Jim and says that he wants to talk to him about his former employee Toni.

Joss announces to Savi and Kim that Scott proposed to her and she is getting married. They are all hugging and celebrating, and then April walks in and steals Joss’s thunder and announces that Daniel is an FBI agent and was just using her to get to Paul.

Harry is having a meltdown and rants to Joss that he has to throw out his entire menu because Greta’s psychic says that they can’t evil white or purple vegetables. Joss gives him a peptalk, and reassures him that everything is going to be fine.

Dom pays his boss Mitchell a visit, and says that he talked to Toni’s former boss Jim and Jim wouldn’t even discuss Toni, he knows that something must have happened at her old job. Mitchell doesn’t want to hear it, he tells Dom to keep his head down, do his job, and leave the women at the firm alone.

Jacob is getting ready for an interview, and invites Karen to go to dinner with him afterwards. Karen turns him down and says that she wants to stay with Anna, she can’t leave her alone for too long. Jacob understands and offers her some advice.

Daniel shows up on April’s doorstep and pleads with her to understand that he actually was in love with her. April doesn’t want to hear it, she tells Daniel that she is out and he and the FBI can find another way to get to Paul. She tells him to get out and never come back.

[11:08:05 PM] Amanda Austin: Savi receives a phone call from Zack at work, and asks him if they can go back to being friends. Toni eavesdrops on their entire conversation. Savi receives a paper saying she is off the Breitling case and hangs up on Zack and storms out of her office and confronts Dom. He tells her that he can’t talk to her at work, and she needs to take it up with Mitchell.

Joss vents to April that Scott bought her a Tesla and she feels like a “kept woman.” She is scared that he is going to hold the car over her head. She has busted her butt to become an independent woman, and she is scared if she marries him she will lose herself.

At home Karen and Anna sit down and discuss her feelings about going back to Korea. Karen confesses that she always wanted to visit her parents in Korea, but she kept putting it off and putting it off, and then one day her mother passed away and she regrets that she never got a chance to say “good-bye.” She doesn’t want the same thing to happen to Anna, and she thinks that she should go back to Korea and see her family.

Savi storms back to her office, and Toni tells her that she should file a sexual harassment claim against Dom since he just embarrassed her in front of the entire office. Savi argues that the didn’t sexually harass her, and Toni confesses that he didn’t harass her either, but a girls gotta go what a girls gotta do.

Harry confronts Greta, and tells her that they need to come to a compromise over the menu. She flirts with him and says she will try and then walks off.

Jacob meets Karen for lunch and announces that he got a new job. He has been hired by UCLA to oversee their new fellowship program at Boston University, and he gets a full-time teaching position on the staff. Karen is shocked that he is moving to Boston, but he invites her to come live with him there. She is shocked, and doesn’t say “yes” or “no.”

FBI Agent Thomas arrives at April’s store and says that there is a problem. He informs her that if she doesn’t help them set up Paul, they are going to freeze her bank accounts and assets and alert the government that she cashed in on a life insurance policy for her not dead husband, and he will be forced to sit down with Lucy and tell her about Paul.

Scott comes home from work and Joss confronts him and tells him that she wants a pre-nup. He laughs because she is broke and wants to know why she would want a pre-nup. He reassures her that he wants to take care of her, and he refuses to sign a pre-nup. Scott says that he isn’t going to marry her if she is already preparing for their marriage to fail.

Karen sits down with Anna and calls her mom for her. She puts Anna on the phone and encourages her to tell her parents the truth about everything. Anna takes the phone and begins filling her mom in.

Toni gets called to the conference room and realizes that Savi, Dom, and Mitchell are all waiting for her. Apparently Savi and Dom staged their entire fight, and Savie recorded Toni’s confession on her cell phone. They have her on tape confessing that she filed a fake sexual harassment complaint against Dom. Toni is shocked and speechless.

Joss is getting dressed and on her way out the door. Scott says that he is willing to do their pre-nup, but they are doing it their way and without a lawyer. Joss agrees to pay the water and cable bill until the day they die, they agree to have two children, sex five days a week, and they agree to tell each other they love each other at least once a day.

Dom stops by Savi’s office and thanks her for helping him with Toni. Savi says that even though they aren’t together, she will always have his back. She kisses Dom on the cheek and tells him that she is proud of him before she leaves the office.

Karen, Joss, April, and Savi go out to lunch and Karen is upset because she just dropped Anna off at the airport, and she is headed to Korea. Karen announces that she is quitting psychiatry, because she has realized it isn’t the profession for her. Karen also confesses that she is dating Jacob, and is considering moving to Boston with him. Her friends are all shocked by the news.

Joss arrives at Harry’s and says that she just had a meeting with Greta and she has cleared up the entire menu problem. Harry sees Joss’s engagement ring on her finger when she is preparing to open the champagne. He hugs her and congratulates her, but it is obvious he isn’t thrilled by the news.

Dom confronts Toni and tells her that there is “no chance of her making partner here for a long time” but he isn’t going to fire her. He is going to keep her on at the firm as a junior associate. Before he leaves he warns her to stay away from Svi though, because she will eat her alive.

Savi receives a gift on her doorstep and opens it to find a leather jacket from Zack. She calls him and asks him why he sent it, and he says it is just a thank-you for the Chili Peppers tickets. Save reveals that she and Dom broke up, and Zack invites her out to dinner with him.

Jacob asks Karen if she is moving to Boston with him, she apologizes and says she can’t go with him, she doesn’t want to leave her life and her friends. He warns her that friends can’t fill all her needs, but she points out that they aren’t her friends…they’re her family.

Harry is getting drunk and going over his menu, and Greta comes up behind him and gives him a massage. They start making out in the restaurant and ripping each other’s clothes off.

April arrives home and walks in to her kitchen. She received a package in the mail and opens it. It’s a cell phone with Paul’s new number in it so that she can contact him.

Someone knocks on Karen’s door, she is shocked to see Ben standing on her doorstep.