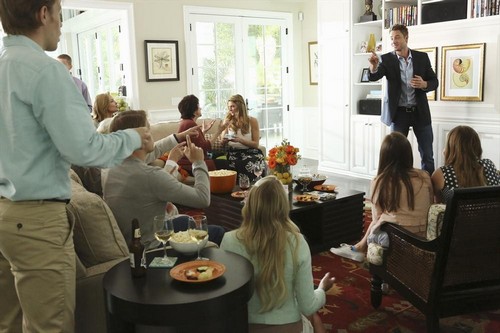 Tonight on ABC their new drama continues with an all new episode called, “Charades.” On tonight’s show April discovers who’s been stalking herMISTRESSES. Meanwhile, Karen volunteers to assist Anna; Toni’s hidden agenda is revealed, and it affects Savi and Dom; and Harry rattles Joss’ confidence as she prepares to meet Scott’s large family.

On the last episode a shocking phone call brought April’s past back to haunt her. She’s even more rattled when it appears that a strange man was shadowing her every move. Savi took Joss’s advice and reached out to her long-absent dad (guest star John Heard). Karen struggled to get Anna to open up and tell the truth, and Toni had some news for Dom. Did you watch the last episode? If you missed it we have a full and detailed recap, right here for you.

On tonight’s show April learns the identity of the man who has been stalking her (guest star Jason Gray-Stanford). Karen blurs doctor-patient boundaries when she offers a helping hand to Anna, Toni’s hidden agenda becomes clear and has a devastating impact on Savi and Dom and when Scott takes Joss home to meet his big, extended family, Harry plants some seeds of doubt that she might not measure up.

Tonight’s episode is going to be an exciting one filled with drama that you won’t want to miss – the producers know they need to get you interested, therefore you can expect a great show. Be sure to tune in for our live coverage of ABC’s Mistresses tonight at 10 PM EST! While you wait for our recap enjoy the video below and leave a comment.

Tonight’s episode of Mistresses begins with Karen fixing herself a cup of coffee. She let Anna crash on her couch for the night. She heads upstairs to get her a towel so that she can wash up before she heads to work at a diner.

Dom calls Antonia in to his office, and she tells him not to worry about last night and they both had too much to drink. After she leaves, Savi marches in to his office and tells him that she needs to talk to him.

Joss and Harry are sitting down to go over plans with the restaurant and Scott texts her and tells her that her package arrived, she ordered a present for Scott’s grandmother, she is going to meet his family. Harry asks her if she is nervous about meeting Scott’s family, and says that she is a “bit of a tornado” and reminds her that his mom didn’t like her much when she first met her either. Joss rushes out and says that Harry is “freaking her out.” Harry calls after her that she probably shouldn’t drink either.

Savi and Dom go for a walk and she asks him if he got her message last night. She called him to tell him that she went to see her Dad last night and drove all the way there because she has been doing some soul-searching. Savi fills him in on her meeting with her Dad and says it was like “sitting with a neighbor, not a dad.” She feels disposable since her dad ran out on her, and since then she always chooses men that need her so that they won’t leave her. The only problem is, Dom didn’t need her, he was already stable and “together.” Zack came to her door, a sad broken puppy, and it made her feel good because he needed her. She wants to learn how to be with someone that just wants her, and doesn’t need her, and she wants that someone to be Dom. Dom laughs and says “okay” and hugs her.

April is running late to the store, she opens the door to leave and the man that has been following her is standing on her doorstep. She tries to shut the door in his face but he says his Name is Adam and he is with the FBI and needs to talk to her about Paul, he shows her his badge. He reveals to April that Paul is working for a drug lord named Domingo for over a year. They have had his phone tapped for over a year, but April isn’t buying it and says that Paul isn’t a gangster.

Joss is trying to wrap Scott’s grandma’s gift, which is clearly for an old lady. Scott revealed that he got his grandma an I-Pad and she is a really hip old lady. Joss freaks out because she needs to buy a new gift, but Scott reassures her that just meeting her is enough of a gift.

All of the girls head over to April’s house so she can fill them in on her visit from the FBI. They want her to give them whatever contact information she can get on Paul the next time she talks to him so that they can track him down and arrest him. April says she isn’t going to cooperate and she doesn’t owe the FBI anything. But, Savi points out that she actually does. She committed fraud by not telling the authorities that Paul faked his death and collecting on insurance money and social security benefits. If she doesn’t cooperate the FBI could charge her with fraud.

The next day Kim stops by April’s store and drags her outside. She doesn’t want to talk to her inside because she thinks that the FBI bugged the store. Kim thinks that if the FBI lost Paul, then they shouldn’t be able to tap his phone. So, that means that the FBI has tapped all of April’s phones and are following her. She says that she is going to call her private investigator George to see if he can help her. While April is on the phone with George she receives a frantic call from Anna, she says that she can’t breathe or leave her apartment and her heart is beating really fast.

Joss and Scott arrive at his family get together, and all of his relatives greet her with open arms. While she is at the get together, Harry calls her phone and leaves her a message apologizing for picking on her earlier about meeting Scott’s family.

Dom gets called in to his boss’s office and learns that Antoina turned him in for sexual harassment. He has to take an eight hour seminar and the incident will be documented. When he comes out of his boss’s office, Savi is standing there and she is furious. She demands to know if he had sex with her and he confesses that he did. Savi storms off and he tries to follow her, but she orders him to get out of her office.

Karen arrives at Anna’s apartment, Anna says she is better but she felt that the walls were closing in on her and she was really anxious. Karen checks her pulse, and wants to take her to the hospital. Anna cries that she can’t go to the hospital and if she misses work she’ll be fired. Karen says she will call her boss and then takes her out of the apartment.

Savi calls April to tell her that Dom slept with Toni. April tells her that she can’t talk to her about it on the phone and promises to have breakfast with her tomorrow. Meanwhile, Joss is having a blast playing charades with Scott’s family. While Scott is up acting out “Lord of the Rings”, his mom bonds with Joss and gives her a present, it’s scented soap. She gushes that she has never seen Scott so happy before.

Dom gets stuck in the elevator with Toni, and he is furious with her. He realizes that it was all an act and she is gunning for his partner spot. She says that it’s nothing personal, he was just the newest partner and the easiest target. She tells him it was a pleasure doing business with him and then hops in her corvette and peels off.

Savi stops by April’s house for breakfast and binge eats while she rants about Dom and Toni. While they are eating, a man searches April’s house for bugs. She is floored when he finds a bug in her ceiling vent. April thinks that Savi is being unreasonable and after all she had an emotional affair with Zack. The investigator finds another bug in Lucy’s room, and April can’t believe the FBI was invading her privacy and rummaging around her daughter’s room.

Karen and Anna arrive home from the hospital, and Karen insists that Anna sleep at her house for the night. She says that her apartment is a health hazard and it’s no wonder that she is having anxiety attacks.

Dom arrives at Savi’s house to try and make amends. Dom says that Toni is the least of their problems, they haven’t been honest with each other for a long time. Dom says that he is always thinking about Savi, but the problem is she never thinks about him and hasn’t been about their relationship for a while. Dom argues that he was supposed to be her clean start after Harry and takes her hand, then he says that they “never had a chance.” Savi hugs him and tells him that she is sorry for the way things turned out.

Joss heads to Harry’s house the next day and tells him how amazing Scott’s family are, and that she bonded with them and she is going to Cousin Katie’s Sweet 16 party. She starts having a meltdown and says that she knows she is going to screw up their relationship and she is going to have to break up with “the whole damn clan.” She says that Harry is right, she can’t do serious. Harry gives her a pep talk and tells her that she found a good thing and she should “go with it.”

Karen has lunch with Jacob and fills her in on Anna’s situation. She confesses that Anna has been staying on her couch. Jacob reassures Karen that she is just being herself, and she always has had a big heart and cared for her patients. Karen kisses him over the table and giggles.

Scott arrives home early and surprises Joss with a gift for being “such a good sport” when she met his family. He surprises her with red pumps, she goes to put the shoe on and finds a ring in it. Scott reveals that it was his Grandma Junes, and puts it on her finger and asks Joss to marry him. She squeals “yes!”

April storms in to the police station and says she wants to see Agent Thomas, and wants to know why the FBI bugged her 12 year old daughter’s bedroom. The officer at the front desk takes her back to Agent Thomas, she is shocked to see him talking to Daniel, who is also wearing an FBI jacket.