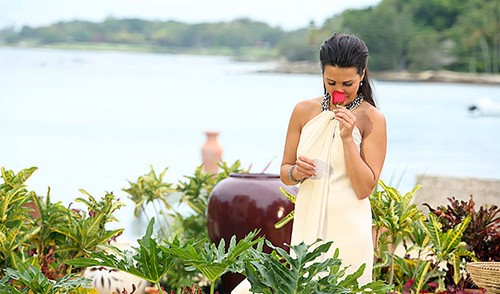 The Bachelorette Andi Dorfman returns tonight on ABC with a new episode. On tonight’s episode Andi makes her decision between Nick Viall and Josh Murray in the Season 10 finale. Before the final rose ceremony, she goes on two last dates and introduces both men to her family.

On the last episode, It was an exciting, unpredictable reunion as the most memorable bachelors from this season – including Andrew, Brian, Chris, Cody, J J, Marcus, Marquel and Tasos — returned to confront each other and Andi one last time on national television to dish the dirt and tell their side of the story. Ashley and J.P. Rosenbaum returned, and they had plenty of good news to share since their storybook wedding in December 2012. Andi came face-to-face with the men she sent home brokenhearted as they tried to get some closure about their fractured relationships. Did you watch the last episode? If you missed it we have a full and detailed recap, right here for you.

On tonight’s episode, after Andi’s dramatic breakup with Juan Pablo last season, she refused to give up on her search for her one great love. After surviving shocking twists and turns and a journey filled with laughter, tears and love, Andi narrowed down the 25 bachelors to two fabulous guys – Josh and Nick. Josh is the type of man Andi has always dated in the past – handsome, athletic and playful – but Andi is plagued with a nagging doubt that he may be too good to be true. Her relationship with Nick is undeniably passionate and filled with an intensity she has never known, but she worries that it may be overwhelming. In this week’s dramatic conclusion, Andi is absolutely torn between the two men and can envision a future with both, but time is running out, on the Season Final.

Tonight’s finale episode is going to have people talking and you are not going to want to miss a minute of it. The Bachelorette airs tonight at 8PM so don’t forget to come back for our live recap!

Tonight’s season finale of The Bachelorette begins with Andi Dorfman in the Dominican Republic. Nick Viall meets up with Andi, and they will be spending the day with Andi’s family. He is nervous, and “hopes he doesn’t screw up.” Andi introduces him to her parents, Patti and Hy. Hy is surprised how nervous Nick is, and thinks he is the most nervous guy Andi has ever introduced them to.

After dinner Nick sits down with Andi’s mom Patti and expresses to her how much he loves Andi. He confesses that he “loves her in ways he has ever loved anyone before.” Patti tears up a little bit because she can tell that Nick is head over heels in love with her daughter. Next, Nick sits down with Andi’s dad Hy, and is determined to get his blessing. Nick gushes to him about all of the qualities he loves about Andi. Hy thinks that Nick and Andi are a great fit, and he truly believes that they are in love, he can definitely see Nick as his son-in-law. After chatting with Andi’s family, Andi walks Nick out of the car and sees him off.

Next Andi Dorfman introduces Josh Murray to Andi’s parents, he doesn’t make an awesome first impression when he walks in to the room sweating and saying how nervous he is over and over. Andi’s sister Rachel is skeptical about Josh because of the fact that he was a pro-athlete, and Andi has had a horrible past when it comes to dating pro-athletes. Josh sits down for a 1-on-1 conversation with Andi’s dad Hy. Josh professes his love for Andi, and says that he is “ready to spend the rest of his life with Andi without a doubt.” Hy says that he has faith in Andi’s decision, so Josh has his blessing. After speeking with Andi’s parents, Josh feels really good about himself, and he can definitely see them as his in-laws.

The next day Andi sets out for her last 1-on-1 date with Josh Murray. Andi reveals to Josh that she wants to reenact their first date, and they are headed out on a yacht. They spend most of the boat ride giggling and making out with each other. Josh jokes that they are sailing back to Atlanta. After their boat trip, they had back to land and have some drinks together and cuddle on the couch. Josh reassures Andi that he is ready to take the next step in their relationship. Josh has a present for Andi, he presents her with a personalized baseball card with a picture of Andi on it and he made up corny stats like that she “swears too much.”

Now it is time for Nick Viall’s last date with Andi. They meet up and Andi reveals that they will be spending the day going off-roading through the Dominican Republic country-side. They climb in to a jeep and begin cruising down a muddy dirt road I the woods and splashing through puddles. They arrive at the beach and Andi surprises Nick with a private picnic at a secret lagoon. They sit down on the picnic blanket and discuss Nick meeting the Dorfman Family. He exclaims that he “loves her family,” and fills Andi in on everything he discussed with her parents Patti and Hy.

After their day on the beach Andi and Nick head back to his room for some drinks. They cuddle on the couch and discuss the big day tomorrow. Nick is nervous, but he can’t wait to propose to Andi and spend the rest of their lives together.

Now it is time for Andi to make her big decision, does she want to spend the rest of her life with Josh Murray or Nick Viall? Saying good-bye to one of them is going to be “the hardest thing she has ever done in her life.” Nick is nervous, but his gut tells him that he is going to propose to Andi and she is going to say yes. She hasn’t given him any reason to think that she won’t choose him. Josh is just as nervous, and thinks this is the “biggest day of his life,” he is 100% ready to propose to Andi. Josh sits down with Neil Lane to pick out an engagement ring for Andi. While Josh is looking at rings, Andi shocks Nick and shows up on his doorstep.