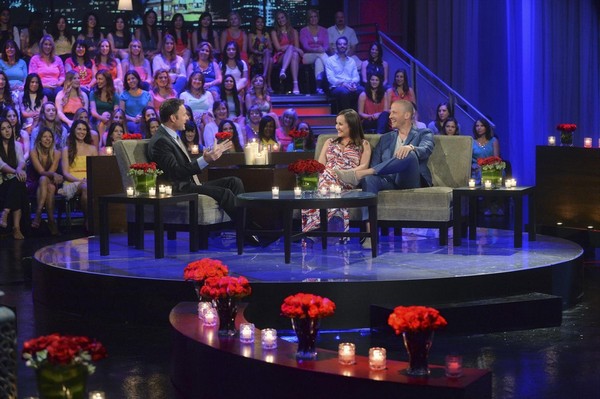 The Bachelorette Andi Dorfman returns tonight on ABC with a new episode called, “The Men Tell All.”  On tonight’s episode Andi and 16 of the rejected bachelors dish about the season and each other; Ashley and J.P. Rosenbaum talk about their lives since their December 2012 wedding. Also: a blooper reel; a sneak peek of the season finale and the series “Bachelor in Paradise.” Host: Chris Harrison.

On the last episode, Romantic adventures awaited Andi and the final three men – Chris, Josh and Nick – as they traveled to the beautiful island of the Dominican Republic. There was electricity and passion in the air during these sand and surf excursions as Andi continued to explore what her future would be like with these potential partners. She spent special intimate time with each of the final guys and there were possible invitations to spend the night in a “fantasy suite.” Will Andi see another side to these bachelors? However, she made a stunning decision that changed the direction of her journey to find love. Did you watch the last episode? If you missed it we have a full and detailed recap, right here for you.

On tonight’s episode, It’s an exciting, unpredictable reunion viewers won’t want to miss as the most memorable bachelors from this season – including Andrew, Brian, Chris, Cody, J J, Marcus, Marquel and Tasos — return to confront each other and Andi one last time on national television to dish the dirt and tell their side of the story. Ashley and J.P. Rosenbaum return, and they have plenty of good news to share since their storybook wedding in December 2012. Andi will come face-to-face with the men she sent home brokenhearted as they try to get some closure about their fractured relationships. A sneak peek of the new hot ABC series, “Bachelor in Paradise,” will be featured along with a first look at the explosive final days of Andi’s journey to find love.

Tonight’s Bachelorette is the special Men Tell All episode. Chris Harrison takes the stage, and is joined by Bachelorette alums Ashley Hebert and JP Rosenbaum, and Ashley is six months pregnant. They reveal to Chris that they are actually in the process of moving to Miami, Florida because they have family down there. Chris Harrison reveals to the audience that they have an ultrasound tech on stand-by, and they are about to find out whether they are having a boy or a girl live on stage.

The ultrasound technician arrives on stage with his machine and applies the gel to Ashley’s stomach. They put the ultrasound up on the big screen, and the technician reveals that Ashley and JP are having a little boy. JP is thrilled to be having a boy, he was obviously hoping for a boy. Ashley confesses that she has had a feeling for months that the baby was a boy, she just knew.

Up next is a preview of The Bachelorette spin-off Bachelor In Paradise, which airs on August 4th. The sneak peak features Clare Crawley, Marcus Grodd, Marquel Martin, Chris Bukowski, Elise Mosca and many more Bachelor and Bachelorette alums. The series looks like it will be full of drama, tears, sex, and at least one member of the show being hauled off in an ambulance and in a police car.

Chris Harrison has Andi’s guys join him on stage, except for the final two Nick Viall and Josh Murray, for the Men Tell All. First Chris asks the guys what is so great about Andi and why they were all smitten with her. Marquel says it was a blessing to be on the show, Nick S. says that he was intimidated by all of the good looking guys on the show and he couldn’t even take his shirt off.

First Chris Harrison confronts the most sensitive issue of the season, when Andrew allegedly referred to Marquel and Ron as “blackies” during the rose ceremony. Marquel says the issues has yet to be resolved, but he knew he was representing his friends and families and wanted to handle it maturely. Andrew begins to deny it, but Chris Harrison shares a clip of Andrew leaning in and whispering something to JJ during the rose ceremony when Ron got his rose. However, there is no audio so we will never know exactly what was said.

Chris Soules jumps to Andrew’s defense and says that JJ’s credibility is shot. And, he threw multiple guys under the bus throughout the show. Marquel interrupts and says that they are getting off topic, and he will never forgive the ignorance that is racism. Marquel points out that Andrew never actually apologized, and he believes what JJ said because JJ is his friend. Andrew apologizes and says that he hopes he and Marquel can be friends again.

Marquel joins Chris on stage in the hot seat, and Chris asks him what happened and why he thinks Andi sent him home. Marquel thinks that he and Andi had an automatic connection, but he somehow got stuck in the friend zone. Chris thinks that Marquel should have kissed her and he missed some signals. Marquel laughs that he had no idea all the other guys were kissing her so soon, and he wishes he knew and he would have taken more initiative.

The next guy to sit down in the hot seat with Chris is Marcus Grodd, who was the first guy of the season to tell Andi Dorfman that he loved her. Marcus confesses that he got his heart broken, and when Andi sent him home he was embarrassed and hurt. But, he has no regrets about how open an honest he was with Andi when he told her he loved her. Andi was a real love for Marcus and he took it very seriously, and he thinks that if you love someone you should tell them every day.

Up next Andi Dorfman joins Chris Harrison on stage, and the guys get to see her for the first time since filming The Bachelorette. Marcus addresses Andi first, and they discuss how open he was so early on in the show. Andi says that she realized during hometown dates that she didn’t have the same feelings as Marcus did.

Cody Sattler says that Andi never go to see the “real Cody.” Andi says that she wishes so bad on Juan Pablo’s season of The Bachelor that he had sent her home when he realized there was no future for them instead of stringing her along. So, she sent Cody home because she didn’t want to string him along.

Nick S. the pro golfer asks her why she acted like it was a burden to talk to him. Andi says that her guard was up, and not every conversation flowed like the next. Chris Harrison interrupts to introduce Chris Bukowski to Andi, since they never got to meet on night one. He tries to come down from his seat in the audience but Chris Harrison tells him he isn’t allowed to join them on stage.

Next Chris Harrison brings up the rumors that Andi Dorfman is pregnant. Andi reassures Chris and every one in the audience that she is NOT pregnant. Andi says it is crazy how much stuff is made up about her, and she just laughs at the stories.

Next, Chris reveals that he has the lie detector test results that Andi tore up in Italy. According to the test results, Brian, JJ, and Chris Soules told no lies during the lie detector test, and Marcus, Dylan, and Josh did lie. Marcus lied, and said that he has not slept with more than 20 women, and the truth is he has. Dylan lied and said he prefers brunettes, but the truth is he prefers blondes. He also lied and said he was ready for marriage, but that was a lie. Chris Harrison says that Josh Murray lied about two things on his lie detector test, but Andi says that she doesn’t want to know and Chris can “toss them.”

The Bachelorette: Men Tell All ends with a promo for the Season 10 finale, which will air on July 28th.