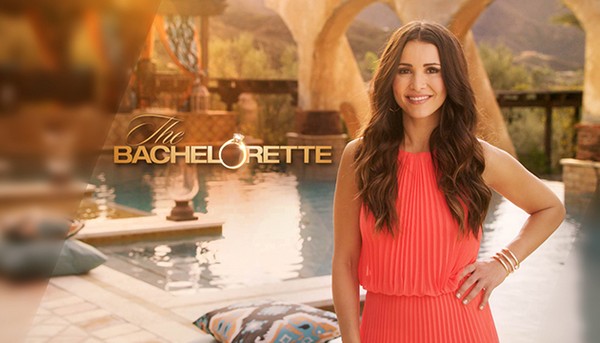 The Bachelorette Andi Dorfman returns tonight on ABC. On tonight’s episode Andi and the remaining three bachelors visit the Dominican Republic, where romantic outings include a beachside dinner, a tour of Santo Domingo and a horseback ride. Only two finalists remain after the rose ceremony.

On the last episode, Andi’s emotionally charged, whirlwind world tour to find love came back to the U.S. as she traveled across country to visit Nick, Chris, Josh and Marcus in their hometowns and to meet their families. Her spirit and resilience was about to be severely tested by the men’s loved ones as she tried to figure out if she could love more than one man at a time. Were all of these bachelors ready to be married? Andi tried and found out from the people who knew them best, as she moved closer to making her fairytale come true. However, the fantasy was interrupted by a real-life tragedy as the group learned about Eric Hill’s heartbreaking fatal accident. Did you watch the last episode? If you missed it we have a full and detailed recap, right here for you.

On tonight’s episode, Romantic adventures await Andi and the final three men – Chris, Josh and Nick – as they travel to the beautiful island of the Dominican Republic. There is electricity and passion in the air during these sand and surf excursions as Andi continues to explore what her future would be like with these potential partners. She will spend special intimate time with each of the final guys and there are possible invitations to spend the night in a “fantasy suite.” Will Andi see another side to these bachelors? However, she makes a stunning decision that changes the direction of her journey to find love.

Tonight’s episode of The Bachelorette kicks off with Andi Dorfman in the Dominican Republic, getting settled in to her suite. She contemplates her final three guys, Nick, Chris, and Josh and discusses what it would be like to spend the rest of her life with each of those guys.

Andi gets ready for her 1-on-1 date with Nick Viall, and meets up with him at a helicopter pad. It’s the first time they have seen each other since Andi’s trip to Milwaukee during his hometown dates. They land on a private beach and take a dip in the ocean, and set up a picnic. Andi is concerned about something his family told her. According to Nick’s family, his past break-up was much more devastating than he ever let on to her. Nick confesses that after he had a bad break-up when he was in his early twenties he didn’t talk to anyone for six months because his “ego was so bruised.” Nick end up rambling, and is a little upset with himself because he never told Andi that he loved her when he had the chance on the beach.

Later on Nick and Andi sit down at a fire on the beach to have a romantic dinner. Nick is determined to tell Andi that he loves her before their beach is over. Nick takes out a book and says that he wrote a fairytale in his down time. He takes out a book, full of drawings, and reads the fairytale that he wrote about them meeting on The Bachelorette. Andi thinks that it is “kinda childish in a cute, fun, way.” Andi is moved by seeing a side of Nick that she has never seen.

After Nick is done reading his fairytale, Andi gives him the key to the fantasy suite and invites him to spend the night with her. Nick takes Andi’s hand and leads her under the trees, he reveals that he has been wanting to tell Andi something since Belgium, and he loves her. Andi doesn’t tell him that she love him back, but she tells him that she “loves to hear that.” They head in to the fantasy suite and shut the door.

The next day Andi meets up with Josh Murray for their 1-on-1 date. Andi decides that she and Josh should tour the Dominican Republic together and check out some of the vendors and shops in town. After some shopping, they head to a baseball field where kids are playing a game. They invite Andi and Josh to come out on the field and play baseball with them, Andi thinks he is “like a little kid on Christmas.”

Later Andi and Josh sit down for a romantic dinner and discuss playing baseball with the kids and what kind of parents they think they will be. Josh confesses that he has been picturing what his life will be like with Andi and the family that they will have together. He tells Andi that he loves her and he wants to marry her and spend the rest of his life with her.

The next morning Andi meets up with Chris Soules for their 1-on-1 date. She decides to surprise him with some horseback riding, and is a little nervous because she hasn’t been on a horse in years. After a few scares Andi finally is able to control her horse, and they take a break and sit down in the countryside to talk. Andi gushes to Chris about how much she loved his family and their hometown date in Iowa. They decide to play “Ghosts in a Graveyard,” Chris’s family’s version of hide-and-seek. Despite obviously having fun, Andi is torn and has no idea whether she will be taking him on to the final two.

After spending the day together, Andi and Chris sit down to have dinner together. Chris brings up Andi possibly moving to Iowa to live with him, and Andi has second thoughts.

Andi bursts in to tears and says that she would be lying if she blamed it on Iowa, and the honest truth is she doesn’t see a foundation between them that she sees with the other guys. She doesn’t see herself living in Iowa, but there is more to it, and she has too much respect for him to blame it on Iowa. She doesn’t want to take him to the rose ceremony and be disrespectful to him and make him wait, when she already knows she isn’t going to give him a rose. She has been “trying and trying but she’s just not there.”

Chris says that he appreciates Andi’s honesty and respects her for it. He’s disappointed, but he “get’s it.” Andi cries and apologizes and says she feels like an idiot, because she can’t make herself like him. In her head she knows she should like him, but her head and heart “don’t match up.” It’s safe to say they won’t be spending the night together in the fantasy suite. Andi apologizes again, and says good-bye to Chris, he’s going home. Despite the fact that she just dumped him, Chris comforts her before he heads home.

The next day Andi Dorfman sits down with Chris Harrison and confesses that she might be falling in love. Andi explains why she sent Chris Soules home before their fantasy suite date. She realized when he started saying that he was in love, that she wasn’t in love. One night in the fantasy suite wasn’t going to change her feelings, but she thinks he is a “class act” and she made the right decision. Andi fills Chris is on her 1-on-1 dates with Nick and Josh, and brags that both of them told her that they loved her. But, she has a few concerns with both of them. With Nick he is always serious and she is worried that he doesn’t really let loose and have a good time, and with Josh he is always having a good time and she isn’t sure if he will ever be able to be serious.

They are still going to hold a rose ceremony, even though it is obvious that Nick and Josh are the final two, because Andi want’s to give them the opportunity to accept the rose. They may have had a change of heart and decided they aren’t ready to propose to Andi.

It’s time for the rose ceremony. Chris Harrison meets Nick and Josh down on the beach, and reveals that Chris Soules has been sent home. Andi joins them at the ceremony and confesses that she sent him home before the fantasy suite because she didn’t see a future with him. Andi passes out the final two roses and Nick and Josh both accept them.