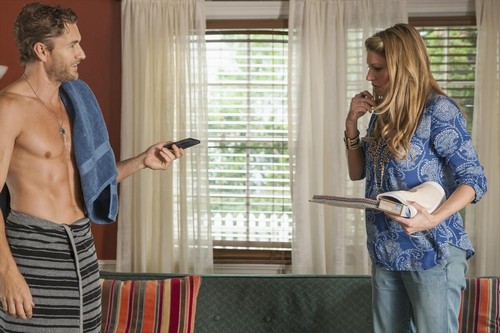 Tonight on ABC their new drama MISTRESSES continues with an all new episode called, “Coming Clean.” On tonight’s show April’s haunted by her past, as well as by a mysterious man. Meanwhile, Savi contacts her estranged father; Karen finds it difficult to get Anna to be honest; and Toni shares some news with Dom.

On the last episode the four best girlfriends came together to help Savi say goodbye to her beloved house. Meanwhile, April realized the world of being a mistress collides with her role as a mother. A scheming Joss found a way to keep Harry from returning to Australia when she meets a celebrity supermodel, and Karen was faced with a soul-crushing dilemma concerning her lover, Jacob and her client.

On tonight’s show a shocking phone call brings April’s past back to haunt her. She’s even more rattled when it appears that a strange man is shadowing her every move. Savi takes Joss’s advice and reaches out to her long-absent dad (guest star John Heard). Karen struggles to get Anna to open up and tell the truth, and Toni has some news for Dom.

Tonight’s episode is going to be an exciting one filled with drama that you won’t want to miss – the producers know they need to get you interested, therefore you can expect a great show. Be sure to tune in for our live coverage of ABC’s Mistresses tonight at 10 PM EST! While you wait for our recap enjoy the video below and leave a comment.

Tonight’s episode of Mistresses begins with Harry and Joss planning their grand opening, and what will be on the menu. Joss is clearly distracted while Harry stands in nothing but a towel and dripping wet, discussing braised rabbit. When he reaches over her for his wallet, she jumps up flustered and yells at him to put a shirt on. He is oblivious to how uncomfortable she is, and jokes that he didn’t know it was a formal meeting.

April is working in her studio, when she receives a phone call from Paul. She yells that he wasn’t supposed to call her. He explains that he got caught up with the wrong people and might be serving jail time, he is scared that it is going to be on the news and Lucy will learn that he is alive. April is shocked, and Paul tells her to give him 48 hours to try and straighten it out before she says anything to Lucy.

Joss is walking down the street and bumps in to her friend Stephanie, who reveals that she is recently divorced. Joss says that she knows the perfect person, and texts her Harry’s info and tells her to call him.

Joss, Savi, and Karen all rush to April’s side and she fills them in on her latest Paul drama. Joss thinks that Paul is faking it so he can get closer to April. April doesn’t think so though, because she could hear how scared Paul was in her voice.

Later that night Joss catches Savi booking a trip to Costa Rico. Savi reveals that it is for her and Dom, he let her have the last blueberry muffin at work that morning, so Savi is sure that they are going to get back together any day now.

Anna shows up for her session at Karen’s. She tells Karen that she doesn’t want to talk about Jacob, and she is over their awkward elevator run in. Karen calls her out and asks her why she lied about her address. Anna scoffs that she lied about everything she told her, and she even lied about being an escort. Karen is shocked and asks why she would waste their time, but Anna explains that if she didn’t tell Karen something she never would have let her out of the hospital.

The next day Savi surprises Dom with a whole box of blueberry muffins at work, and then invites him to go to Costa Rico with her. Dom is thrown for a loop, and asks her why she thinks they should go on vacation together. Savi says that she wants to work through their problems on a beach. Dom tells her that running away together to the beach isn’t going to solve their problems, they need to work them out together and Savi needs to talk about the accident and the baby they lost.

Joss receives a phone call from Harry, and he’s not happy that Stephanie is cyber-stalking him and blowing up his phone. Joss argues that he is getting old and she doesn’t want him to be alone his whole life, but he hangs up on her.

Toni tells Dom that she is going to miss their meeting because another law firm is taking her out to lunch to offer her a position. She asks him not tell anyone, and he wishes her luck as she leaves.

April is walking through the empty parking lot, and she sees a shady customer that was in her store earlier. She panics and jumps in her car and peels out of the parking lot. She is convinced that whatever bad guys Paul got caught up with are going to come after her.

Harry rushes over to April’s house to check on her and make sure that the creep from the parking garage didn’t follow her home. Harry thinks that April should call the police, but she explains that she can’t because it might have to do with Paul and Lucy still thinks that he is dead. Harry says it might be time to tell Lucy the truth instead of keep lying to her.

Joss convinces Savi that the reason all of her relationships fail is because she has “daddy issues” because her Dad left her when she was eight. Savi decides that she is going to fix her issues and deal with her problem like Dom told her to, so she climbs in the car and puts her Dad’s address in her GPS.

Toni reveals that she got the job at the other law firm to Dom, and invites him to go out with drinks and celebrate with her. Mean while Savannah arrives at her Dad’s house and he is shocked to see her. He invites her in and apologizes for the mess. Savi puts him on the spot and asks him how their father-daughter relationship is. He thinks they are fine. But, Savi picks up a photo on the coffee table and he explains that he went to Hawaii for his stepdaughter’s wedding. She is furious because he didn’t even come to her wedding.

Harry barges in on Joss after his horrible date with Stephanie and demands to know why she would set them up since they have nothing in common with each other. Joss confesses that her boyfriend thought that she was spending too much time with Harry, they both laugh it off.

Anna shows up at Karen’s house and gives her a flower and tells her that she is going to find a new doctor because they aren’t making any progress. Karen invites her in for one last session. Anna finally opens up to her and reveals that she met an American in Korea when she was 16 and married him and moves to the US with him. But once they got to America, he raped her and left her. And, her parents are destroyed that she left them.

April receives a phone call from Paul, he says he isn’t turning himself in to the police and he is going to disappear again. He hangs up on April while she is yelling at him, unbeknownst to her the creepy guy from the parking garage is sitting outside her house watching her.