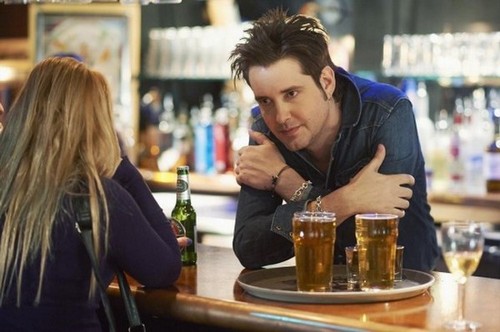 Tonight on ABC ROOKIE BLUE continues with another new episode called “Deal with the Devil.” On tonight’s show Oliver prepares Andy to defend herself at Duncan’s dismissal hearing.

On the last episode after the grim discovery of a missing man’s body in the trunk of his car, 15 Division had to try to find out what happened to Brian Gowdy – a high school teacher with no apparent enemies. While trying to track down their prime suspect, Andy and Sam went on the road to interview a list of prison inmates, leading them to someone with a surprising connection to Sam. Meanwhile, back at 15 Division, Traci lead the investigation and realized they may have the wrong suspect. Did you watch the last episode? If you missed it we have a full and detailed recap, right here for you.

On tonight’s show Despite a generous offer from Inspector John Jarvis, Oliver isn’t interested in extending his contract as Acting Staff Sergeant. He’s thrilled to be going back to the street. But Oliver’s day takes a serious turn for the worse when his daughter Izzy shows up unannounced at the station, and when he learns Professional Standards is arriving early for Duncan’s dismissal hearing. Oliver and Andy do some crash-course prep, but both are rendered speechless when Duncan presents incriminating new evidence against Andy. Cornered, Oliver finds himself making the exact kind of professional deal he never thought he would be capable of making.

Tonight’s episode of Rookie Blue begins with Oliver arriving at work, and the Inspector asks him if he is out of his mind because he turned him down. Oliver says that “white shirts just aren’t in his DNA.” They all head to briefing, to learn about “Operation Cannolli.” A fire bomb went off in Little Italy, and their lead suspect, Vincenzo Pizzuti is MIA. Oliver gives out assignments for the day, and then tells Andy she will be working for him. Everybody heads out on their assignments, and Andy is disgusted when she learns her assignment is to clean Oliver’s office.

Nick and Chloe head to a restaurant in Little Italy and question the owner about Vincenzo Pilluti, he claims he has no idea who Pilluti is. Nick asks if he can look inside the basement, but the owner tells him to come back with a warrant.

The Inspector interrupt Oliver and Andy while they are organizing the files in his office and announces that there was a change of plans Duncan’s hearing will be held in two hours, his lawyer and the union rep are on the way to the station. Oliver panics, and says he has to get his notes ready. Andy confesses to him that she might have “fudged a few of his performance reviews to make him seem better.” Oliver isn’t happy, he says this is bad…very bad.

While Nick and Chloe are sitting in the alley behind Mario’s restaurant, they call Oliver and tell them that Mario wouldn’t cooperate and they have no lead on Vincenzo. Oliver tells them he can’t “hold their hands through this one” because he is too busy, he tells them to “take initiative.” They hang up and one of the bus boys brings out bags of trash and throws them in the dumpster. Nick and Chloe steal the trash and take it back to the station to go through it.

While Oliver is trying to make sense of his notes and fix the fudged performance reviews with Andy before the hearing, his ex-wife Zoey shows up with their daughter Izzy. She says Izzy got kicked out of school for streaking through an assembly, and Oliver has to watch her. Zoey leaves and Oliver pawns his teenage daughter off on Officer Peck for the day.

Nick and Chloe are digging through the garbage from Mario’s restaurant. While Chloe is discussing her birthday plans for the night, she stumbles across a severed thumb, which she mistakes for a severed penis. They show the thumb to Swarek and he says it is enough for a warrant. He tells them to go tear Mario’s restaurant apart and bring him everyone inside.

Nick and Chloe bring in seven guys, including Vincenzo Pilluti. Swarek takes Vincenzo in to the interrogation room. Vincenzo claims he had nothing to do with the fire-bombing, but Swarek reveals that they have a witness who seen him throwing the bomb through the window.

Oliver is in his office lecturing Andy on what she is going to say at the hearing. Izzy interrupts because she is hungry. Oliver tells Peck to take the thumb to the morgue and see if they can get a finger print off from it, and take Izzy with her and “hit the drive-thru.”

Sam gets bad news and learns that his one witness is suddenly changing her mind and claiming that she never seen Vincenzo throwing the bomb through a window. Sam heads in to question the owner of the restaurant, Mario, he still isn’t cooperating. He claims he had no idea Vincenzo was in his basement and no idea how a thumb got in to his garbage. Afterwards the fingerprints on the thumbs come back from the morgue, and Sam learns that the thumb belongs to Mario’s son Mario Jr.

They bring Mario Jr. in for questioning and he insists he lost his thumb in a meat slicer. They put Mario Jr. and Vincenzo in the interrogation room together and leave them alone. After a few minutes they learn that Vincenzo cut off Mario’s thumb because his girlfriend was the witness that ratted him out over the fire bomb. When Mario Sr. learns that Vinnie chopped off his son’s thumb, he tells Sam that the witness won’t be a problem and he will make sure that she testifies against Vinnie and the firebombing.

Andy’s hearing is not going well, apparently Duncan recorded a video of her on his cell phone at the bar, and in the video she clearly states that she didn’t train him well, and she thinks it might be her fault that he screwed up. They take a brief break, and Oliver warns Andy that they might come after her and investigate her conduct. Peck breaks the news to Oliver that she lost Izzy and can’t find her, and Oliver is on the verge of a meltdown. The inspector seizes the moment and convinces Oliver to keep his job to make sure that Andy isn’t kicked off the force, however the Inspector says there is one stipulation, he has to give Duncan his job back. Oliver argues, but the Inspector tells him that he can put him on the bench for all he cares, but they have to let the Police Commissioner’s son come back to work or else all hell is going to break loose.

Peck has one of the officers trace Izzy’s cell phone, and when Oliver comes out of the hearing Peck announces that Izzy is waiting in his car. He asks her how she got her car keys, and she laughs that she picked his pockets earlier. Izzy confesses that she stopped by Oliver’s house before school and caught Celery with candles performing a fertility ritual, and she is scared that her dad is having another baby and that is why she has been acting out. Oscar reassures her that they are not having a baby and he is clearly going to have to have a talk with Celery, then they head out for some father-daughter cheeseburgers.

Chloe gets out of work and she can’t find Dov anywhere. She asks Nick if he has seen Dov, and he says he was waiting outside for her. But he is gone, Chloe grumbles that she is having the worst birthday ever. Diaz never showed up for work, Dov checks his truck and finds empty cocaine baggies He heads home and confronts Diaz and tells him to get it together, Diaz argues that he can do whatever he wants on his own time, and claims he’s not a “junkie criminal.” Dov says, “No, but you are a cop.”