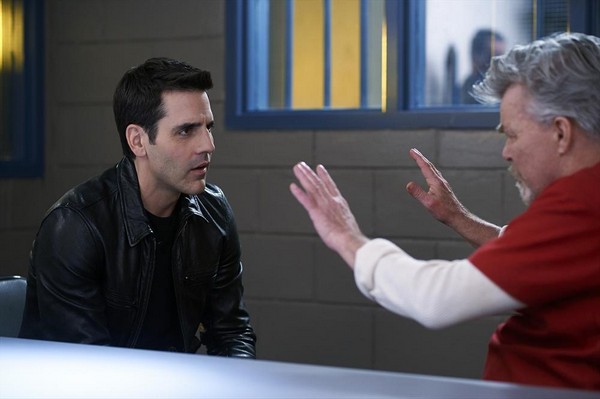 Tonight on ABC ROOKIE BLUE continues with another new episode called “Two Truths and a Lie.” On tonight’s show a missing high-school teacher’s body is found in the trunk of his car.

On the last episode after tracking a handgun found at a frat house brawl, 15 Division decided to go undercover at the club-land bar that’s supplying the illegal handguns. During the undercover operation, Dov couldn’t help but notice Chris’s jumpy, nervous behavior – and when Chris went to extreme lengths to ensure a specific drug dealer walked away without charge, Dov was left wondering just what exactly was going on with his friend. Meanwhile, Andy was devastated to learn that allegations made by her flamed-out rookie, Duncan, meant she had to sit out the night’s activities. Andy offered to help Sam with his missing person’s case, which then took a dark and unfortunate turn. Did you watch the last episode? If you missed it we have a full and detailed recap, right here for you.

On tonight’s show after the grim discovery of a missing man’s body in the trunk of his car, 15 Division must try to find out what happened to Brian Gowdy – a high school teacher with no apparent enemies. While trying to track down their prime suspect, Andy and Sam go on the road to interview a list of prison inmates, leading them to someone with a surprising connection to Sam. Meanwhile, back at 15 Division, Traci leads the investigation and realizes they may have the wrong suspect.

The body Andy and Sam found has turned into more than a simple murder case. The fact the killer attempted to hurt possibly another driver of the same car – the doctor from last week that had originally raised the alarm – makes the cops believe they’re searching for a serial killer. And that he’s using personals to target his victims.

At the time the only known victim held a spotless record and didn’t even have any dirt in his close. So the cops assumed he was picked at random. However the car the killer was last seen in was picked up on security cameras. And yet, after Gail and Nick set out to bring the car owner in for questioning; it was soon revealed he lent his car to an old friend of his. One that was recently released from prison.

So Sam volunteered to go to the prison and find out any information they might need on their suspect but he oddly didn’t ask Andy to come along. She had to invite herself for the trip to the penitentiary. Which was odd because she thought they were working this case together. So she ignored the way he tried to ditch her and ended up joining him on the road. Perhaps she realized something off with the way Sam volunteered that fast.

And if she did then she was right. Andy didn’t comprehend what was behind Sam’s behavior until after they arrived at the prison. The suspect’s friend, Sean, had told them earlier that Larry had friends on the inside. That information got the detectives thinking that maybe Larry killed Brian as favor for one of his friends. So Andy and Sam arrived at the prison with a set list of who to question – everyone that had contact with Larry.

But one of the names on the list was frighteningly familiar to Sam. It was his father. The same father he had issues with while he was growing up and the one he wanted to make sure no one else ever got the chance to question.

Meanwhile back at the office, Traci is busy trying to find a motive that would connect Brian to anyone in jail. And what she found was nothing. Brian was a like a boys scout. He even helped people in need on his time off. He would take food to homeless shelters and sometimes he would even have to carry the food on the bus if he had to. So his twin brother stepped in and gave Brian his old car. He didn’t want his brother slumping around the city when he could help.

The twin brother, Jim, forecloses houses so he has a lot of enemies and with his brother driving his old car – it would be easy to mistake the two. But that wasn’t the motive either – Larry didn’t have anyone he needed to return a favor to. At least not on the inside. Sam’s father went on to tell Andy what really happened with Larry and Brian seeing as no one was looking for Larry other than him.

Papa Swarek could only tell this next part to Andy. Any attempts at speaking with his son tended to fail so she was the best person to handle him and perhaps help Larry.

Larry had a very unhealthy relationship with his friend Sean. And he told Sam’s father all about it. Growing up, Sean looked out for him at the group home. Then when they got older – Sean was expecting Larry to return the favor. The last time Brian just happened to be part of that favor.

Sean’s wife was having an affair with Brian. She was probably so desperate for love that Brian had look like the only escape possible. He was going to Costa Rica and he and was going to take Sean’s wife with him. Her husband was abusing her and she didn’t just needed a way out. That’s why Brian didn’t tell anyone his plans. Not even his twin brother with whom he’s normally close to.

Yet, Sean found out about the affair and convinced Larry he only wanted to speak with Brian. So Larry picked up the unaware Brian and Sean met with them later. The planned “talk” soon devolved into Sean beating Brian so severely half his face was distorted. Then Sean killed him.

Though don’t expect Larry to admit to that. He nearly killed himself once the cops took him into custody. He’d rather go down that route than betray Larry. His plan was never to stick around anyways. He was simply going to do the favor and then he was going to leave town.

But Sam’s father revealed that Sean’s wife is still at risk. Larry had a reason to believe that Sean was going to hurt his wife. So Andy notified Traci and everyone back at the station. Although they arrived at Sean’s house too late to be of any help. Sean was dead when they got there – his wife killed him in self-defense. However she lost her grip on reality and was in the middle of cleaning up the crime scene when they did finally make it.

Traci and Chris don’t think she’ll get a hard sentence though.

Sam and his father will never be the happy father and son team he might have wished for when he was young. His father was an abusive drunk and after years of pushing Andy away – he opened up to her. He revealed one of his biggest secrets. He told her it was his fault that his father was in prison.

The cops wanted his dad on a robbery and assault and his father had said that he was with Sam all night. Sam told them his dad was lying. Then, barely, into his six month stint – he killed a guy and got twenty years for it. But the real kicker is – he wasn’t lying about being home with his son. No, it was Sam that lied when he told cops he didn’t see his father that night. He just wanted that man out of his life and he lied to get it to happen.

And Andy doesn’t think he should beat himself over it.