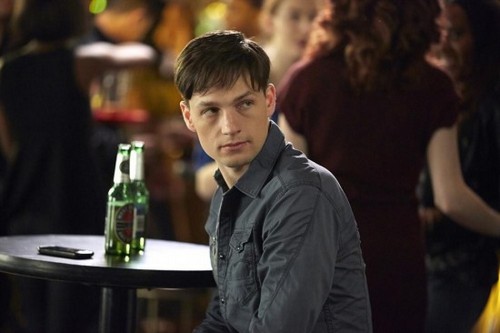 Tonight on ABC ROOKIE BLUE continues with another new episode called “Going Under.” On tonight’s show the team go undercover to track down illegal handguns. Meanwhile, Andy helps Sam with a missing-persons case.

On the last episode Andy worried that her rookie, Duncan, may not had what it took to succeed on the job. But her fears got pushed aside when they discovered a man found shot in a stairwell at a dodgy apartment building – leading to the discovery of an executed gang leader in a nearby apartment. Now, it was all hands on deck at 15 Division to stop a potential gang war from breaking out. Andy and Duncan found themselves alone with the one witness who was able to tie the killers to the crime, and in a life-and-death moment with a 12-year old witness, Andy may have regretted giving her rookie so many chances. Meanwhile, Gail followed up on another victim of the tenement shootings – a woman that took a stray bullet in the laundry room – only to make a harrowing discovery that would shake Gail to her core. Did you watch the last episode? If you missed it we have a full and detailed recap, right here for you.

On tonight’s show after tracking a handgun found at a frat house brawl, 15 Division decides to go undercover at the club-land bar that’s supplying the illegal handguns. During the undercover operation, Dov can’t help but notice Chris’s jumpy, nervous behavior – and when Chris goes to extreme lengths to ensure a specific drug dealer walks away without charge, Dov is left wondering just what exactly is going on with his friend. Meanwhile, Andy is devastated to learn that allegations made by her flamed-out rookie, Duncan, means she has to sit out the night’s activities. Andy offers to help Sam with his missing person’s case, which then takes a dark and unfortunate turn.

Chris’s erratic behavior is starting to become noticeable at work. So far his superiors haven’t caught on to his screw-ups but the one person he could never fool – Dov- is on to him!

It all started when they were assigned on a sting operation. They were going under cover to catch some guy selling guns to college kids so it wasn’t supposed to be hard. However a simple trick, buy, and arrest operation managed to get ruined the moment Chris spotted his drug dealer at the club they were surveillancing. And it simply when downhill from there when the drug dealer spotted him!

Now Jamie didn’t know that Chris was a cop so he refused to get lost or even try to comprehend all of Chris’s warning signs. Those weren’t his concerns. The money on the other hand that Chris owes him is. And because he essentially was going to give up whatever it is that Chris has been doing (over the bug Chris was wearing) – Chris was forced into arresting Jamie the drug dealer and revealing himself as a cop.

Not only did that destroyed any chance Chris and Dov had of going through with the sting but Chris then had to correct his mistake of putting Jamie into the system in the first place. That’s why he tried to find a way to release Jamie before their connection could be revealed.

He talked Jamie into possibly being an informant. All the other man had to do was rat out his supplier. Although that proved no to be enough to get either Steve or Traci to ok a deal for Jamie. He gave them information that wasn’t even feasible for a warrant.

Then Chris attempted to talk Dov into doing a sting operation of their own. One that would release his drug dealer. Though Dov didn’t want to risk going rogue after the last time with Gail so he told Chris “no”. But Chris was getting desperate by this point and desperate men are truly capable of anything.

Andy was also getting stir crazy, but luckily for different reasons. Like the fact it’s not her fault that she’s stuck indoors while the guys got to have all the fun. She’s been “assigned” to her desk pending investigation into the complaint Duncan made against her and the department.

As if he honestly had a real reason to complain. Andy had (in vain) tried to cover for him in their very short history together. She had thought he merely needed extra time on the job to figure it all out. But being a good cop never came easy to him so she dismissed some of his mistakes and glossed over it in the official reports. And yet he doesn’t want to go quietly even though he’s aware of what Andy’s testimony will sound like.

Maybe he’s hoping his hot shot stepdad will wave a magic wand and fix everything for him though it’s almost impossible for anyone to get out of ditching their partner in the middle of gun fire.

So Andy was stuck to a desk because of a shmuck and instead of dying of boredom she chose to assist Sam on his missing person’s case. The guy’s name was Brian Gowdy and on paper he was the most boring man alive. A teacher beloved by all with no skeletons in his closet which made his case just as boring.

His brother was the one that reported him missing and once Andy and Sam started looking into his file – they saw a lot of suspicious activity. However it all amounted to the inane conclusion that Brian took a job overseas and proceeded to run away rather than tell anyone where he was going.

A clean shut case if ever there was one.

Nevertheless it turns out there was more to Brian’s story. When Chloe had seen a picture of Brian’s car she picked up on a funny little coincidence she noticed. Earlier, a man had come in complaining about a creepy prospective buyer for his car. Sounds pretty generic but the car was the most important part of the story. It was the same make and model as Brian’s plus they were both selling their cars off of the same website.

They brought in the seller and he told them about how the many had driven them to a parking lot and started in on the weirdest questions he ever heard. Like if he’s ever been to Costa Rica. So Sam and Andy asked him if he could lead them to the parking lot he had escaped from. And in the parking lot there was an abandoned car with Brian in the trunk.

Their case wasn’t so simple anymore!

Then there’s Chris. He made the biggest mistake of his career when he constructed an internal cover up of a drug dealer and if anyone ever finds out then he’s done for. No job and he could be looking at real jail time. And all for what? Because if its cocaine he’s buying from that man then his nose must be so far gone that he’s losing his other faculties.

The once noble cop traded the real drugs Jamie had on him with sugar he found in the department’s cabinet.

Jamie got off and seeing as he knows that Chris was behind his release – he’s just going to keep up with his enterprise. Why would he stop now when he has a cop in his pocket? As for the original sting that was supposed to take down a gun supplier, Nick took care of that. Incidentally, the bartender he was chatting up was the real head of the operation and not the guy they were targeting in the beginning. So Nick at least made sure the night wasn’t a complete waste.

Chris wasn’t the only officer off of his game that night but rather than turn to drugs – Gail started shopping. She would buy up everything she saw on the internet or catalogues and then she would just give it away.

She did this as her own weird form of therapy because Gail never got over the Jameson case. In her mind, she kept seeing the woman bleeding out on the floor and she couldn’t understand why the daughter Sophie was forced to lose her mom like that. Now normally it isn’t in Gail’s DNA to get this attached to a case so when she kept resisting filling out the paperwork – it was a way to hide from things she didn’t want to think about.

Yet Oliver made her confront her worst enemy – emotion! He told her that every cop has had to deal with this and there really isn’t a way to hide from it. No one can be impregnable to these things they see on daily basis. So she’s simply going to have to learn how to cope.