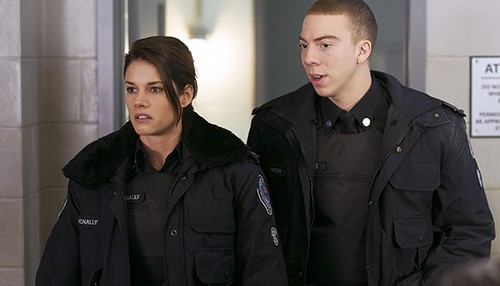 Tonight on ABC ROOKIE BLUE continues with another episode called “Wanting.” On tonight’s show a gang leader is executed, causing fear of retaliation.

On the last episode on the agenda for the day was Project Accountability’ – a citywide operation to seize all “proceeds of crime” – then get to Fite Nite. The officers of 15 Division were assigned to seize items purchased with money earned illegally – a task no one was excited about. Andy and Nick were sent to an illegal gambling house – which turned out to still be in operation – and they dutifully arrested the homeowner. But after a confession that seemed too good to be true, Andy recruited Sam to help her get to the bottom of what’s really going on. Did you watch the last episode?   If you missed it we have a full and detailed recap, right here for you.

On tonight’s show Andy worries that her rookie, Duncan, may not have what it takes to succeed on the job. But her fears get pushed aside when they discover a man found shot in a stairwell at a dodgy apartment building – leading to the discovery of an executed gang leader in a nearby apartment. Now, it’s all hands on deck at 15 Division to stop a potential gang war from breaking out. Andy and Duncan find themselves alone with the one witness who can tie the killers to the crime, and in a life-and-death moment with a 12-year old witness, Andy may regret giving her rookie so many chances. Meanwhile, Gail follows up on another victim of the tenement shootings – a woman that took a stray bullet in the laundry room – only to make a harrowing discovery that will shake Gail to her core.

RECAP: What was first thought to be a simple shooting has quickly exploded into a neighborhood one the edge. If the police don’t do something then the good people, often forgotten in the projects, will be swept up in a full scale gang war.

It all started when Andy and Duncan were called out to an apartment complex on the wrong side of town. There was an injured man on the scene and further investigation showed another injured party –a young woman. And the final discovery in the building from hell proved to be none other than body of an executed gang leader.

But just to rub salt into the wounds, the killer even had the nerve to leave behind a calling card. Inside the mouth of the victim there was a bag of heroin with a trademark logo from a rival gang and because word seemingly spreads like wildfire in these situations – the gang member’s people, the rest of the Jameson crew, have already found about the assassination.

They came equipped to storm the building and would have done it too despite the police presence if the second in command hadn’t calmed his people down. Traci and Steve saw how this shooting was getting out of hand and though cops don’t generally admit to this – they made a deal with the Jameson crew. The gang is giving them 24 hours to find the killer else more civilians are going to get caught up in their war of retribution.

The entire task force was called on to assist with the case. And seeing as Andy and Duncan were first on the scene they were put in charge of family notification. Their victim, Darryl, is still alive and the cops needed to bring is family to him in case a major decision had to be decided. Though for a while there the victim was actually seen as a suspect. He has a past clearly written in detail on his rap sheet. However for the last ten years he’s been clean and that’s mainly due to his son, Marcus.

Still, Duncan wanted to remain skeptical of him. He firmly believed once a criminal, always a criminal! As for Andy, she was the one that did her job and investigated why Darryl would even be in the building. It looks like Darryl was doing some electrical work under the table and after his tools were shown to still be in the electrical closet – he went from a suspect to their only living witness.

Then again that doesn’t change the way Duncan was so quick to dismiss him. Lately Andy has been worried that her trainee is literally un-teachable. She feels like he’s not making any progress and out of sheer desperation she changed up her teaching method hoping to get a better result. She said she was going to start giving him a leeway. But is he really capable of standing on his own two feet? Besides the major screw-ups – he lacks any initiative.

Two of the three victims were shot by accident. Darryl saw the killer and that’s how he got shot and the other victim happened to be standing directly below one of the gunshots trying to do some laundry. It winged her and Gail found her bleeding out.

The killer probably didn’t even know he shot her. Though he did and so far no one has come forward to identify her. The only clue to this mystery woman’s identity is the name she kept repeating to Gail “Sophie, Sophie, Sophie ”. So Gail assumed the woman was attempting to give her own name but it wasn’t until the victim died that Gail went back to the laundry room to give the scene a second look.

Sadly while she was there a little girl entered the room and asked her if she’s seen the girl’s mom. The little girl’s name was Sophie and she’s been waiting for her mom to come back which left Gail in the difficult position of having to deal with telling her about her mother.

Andy and Duncan were going over the paper work, with Duncan complaining about not being out there doing something, when Andy realized that Darryl’s son might have been with him. It was the grape juice that gave him away. The kid had Duncan get a grape juice at the hospital and there was grape juice with Darryl’s things at the scene.

Marcus though wasn’t at the hospital when they arrived in pursuit of their hunch. His grandmother said he returned to her house to get her medication. So Andy and Duncan travelled there. Andy knew it wouldn’t look good for the boy to be seen openly speaking with the cops hence the reason she told Duncan to wait in the squad car around the block while she went in alone.

Marcus has grown up suspicious of cops, that’s how his neighborhood is, and so it took some persuasion on Andy’s part to get him to confess to seeing the shooter. But of course he knows who did it because who wouldn’t recognize one of the Jameson’s crew.

No sooner had Andy called Sam with the new break in the case that the killer showed up at Marcus’ house. Poor Marcus had foolishly told his friend who the killer was seeing as earlier Duncan had him scared that people will believe his dad was involved in the shooting.

That was yet again another failure on Duncan’s part and still none of it could compare to what Duncan did when Andy called for backup. The hot shot cop had an anxiety attack and refused to leave the safety of his squad car.

He abandoned Andy when she needed him most and though she and Marus survived the onslaught of bullets – she reported Duncan’s actions to Oliver. All this time she thought his mistakes were her fault but she’s tired of white-washing the paper work.

Duncan will be suspended and pending an internal investigation he could be fired as well. Oliver said not everyone has what it takes to live with the job and it turns out that Duncan was included!

Speaking of getting fired, Chris is making late night visits to a shady man. Thus far only cash transactions have been shown but if it looks like drugs then the answer probably is drugs. Is Chris risking his career in order to feed a nasty habit?