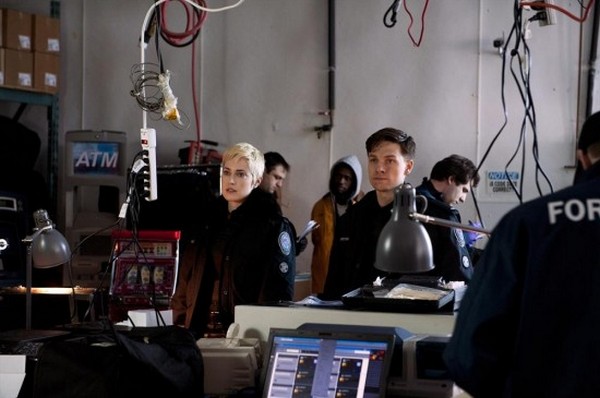 On the last episode in the aftermath of the night’s traumatic events, Andy McNally and Dov Epstein tried to pull themselves together at an all-night diner. But soon they are caught off-duty and off-guard in a volatile diner hold-up. Meanwhile, the weary officers at 15 Division struggled to contain the evening’s collateral damage under the watchful eye of a tough new Inspector, John Jarvis. Ignoring the fact that he was needed back at the station, Nick went rogue to track down Sam Swarek’s next of kin. And in the end, Andy had to face both the men she cared about and shared her heart-wrenching decision. Andy learned that sometimes even making the right choice can have serious consequences. Did you watch the last episode?   If you missed it we have a full and detailed recap, right here for you.

On tonight’s show on the agenda for the day is Project Accountability’ – a citywide operation to seize all “proceeds of crime” – then get to Fite Nite. The officers of 15 Division are assigned to seize items purchased with money earned illegally – a task no one is excited about. Andy and Nick are sent to an illegal gambling house – which turns out to still be in operation – and they dutifully arrest the homeowner. But after a confession that seems too good to be true, Andy recruits Sam to help her get to the bottom of what’s really going on.

Fite Nite is back and the newest rookie Duncan has been chosen to fight for the honor of his squad. It’s a lot of responsibility put on him and unfortunately he won’t be able to live up to it.

The whole squad gathered around Duncan trying to get him prepped for the boxing match but despite their best effort and weeks of practice a suspect managed to get the better of him while out on call. The entire police force has been assigned to Project Accountability. It’s when everything purchased with illegal funds is collected for evidence and that meant Duncan and Andy had to search the proprietors of an illegal gambling ring, home.

Geno Jones was actually fighting with his wife when the police showed up and so he wasn’t happy that not only had his ex-wife returned to claim things but what she didn’t take the police probably would. And yet what finally pushed him over the edge enough to assault a cop of all people – Duncan – was when he was told the cops would be checking his basement.

They were on the premises so they would have found his stash no matter what though Geno didn’t seem to see it that way. They said they were going to take a look and then out of nowhere Geno punched Duncan. Then he attempted to flee.
“Attempted” because the idiot forgot he was wearing an ankle monitor. They eventually took him into custody after he stopped at a friend’s hoping to get hands on whatever that could get the monitor off.

Duncan wasn’t exactly fazed by all of this but after getting hit once for the day and finding out his boxing partner’s physique could rival the Hulk’s – he quickly started to complain about that punch from earlier like it was a real injury. And Chris took his drop-out hard. It felt like this was another nail in his coffin.

Chris is in charge of Fite Nite and so far he’s made only mistakes. He didn’t give the liquor retailer proper direction in both how to get to the warehouse and what the beat cops, detectives, and commissioner would like to drink. The guy tried to drop off cases of kosher wine when what they needed was some real old-fashioned beer.
Chloe stepped in though and helped Chris to calm down. And she kindly prep their new champion to come take over from Duncan – Nick.

Meanwhile, Dov and Gail made a huge bust but stepped on some toes while doing so. They found out about a credit card ring. A group of guys stealing people’s credit card numbers and thought they should be the ones to bring things guys in. And in doing that they forgot to inform their superior officer and had a bunch of detectives that were working on the case. So now everyone is mad at them for going above their pay grade.

Oliver didn’t like going to bat for them. It made him look incompetent and the worst part is his cops did this for the recognition. They weren’t compelled by civil duty – they made an arrest in order to rub it in other people’s faces. Specifically Dov. He personally wanted to show off his bust to Chloe’s husband, Wes.

This one-upmanship came about because Wes and his partner Jen was checking out the same house they were. Only difference is Wes and co. showed up first and they had first dibs on any confiscated evidence inside of the house. And later when Wes didn’t see the significance in what appeared to be blank credit cards – Dov did. So Dov stole this case right from under Wes and Gail just kind of went along with her partner.

Gail has been in a pretty good mood since her newest relationship began. Too bad it ended the way it did though. Gail was doing the obligatory girlfriend thing by meeting Holly’s friends and said friends turned out to be pompous jerks. They didn’t feel someone like Gail (blue-collar) deserved someone like Holly (smart and successful).

Holly got her friends to lay off by telling them she’s merely having fun with Gail. But Gail who wasn’t supposed to hear that last part – did in fact hear everything! So she dumped Holly soon after that and decided to spend her night watching Fite Nite with the rest of her friends.

Andy soon joined her once she finished with Geno and his wife. Geno was hiding money in his home and his wife was so greedy that she played her own kidnapper over the phone to get him to hand over the money. Geno was locked up at the time so of course he was going to believe his wife was in danger but he claimed he didn’t have the money.

And when Andy and Sam went to go rescue his wife, they found her searching the place all by her lonesome. The man she pretended to be her kidnapper was actually knocked out and gagged as she was going through stuff. So then she got arrested and when they were escorting her out – the police found the rest of the money Geno was hiding and willing to let his wife get hurt over.

Andy made a nice bust that day and by time she arrived at the boxing match all good feelings fled when she saw Nick get beat.

Nick knew he couldn’t win but he wanted to fight anyways. He lost and yet that part doesn’t matter because the fight was like his relationship with Andy. As long he put a good fight then he knows he tried. Now if only Andy would fight or him rather than always have the guy fight for her!