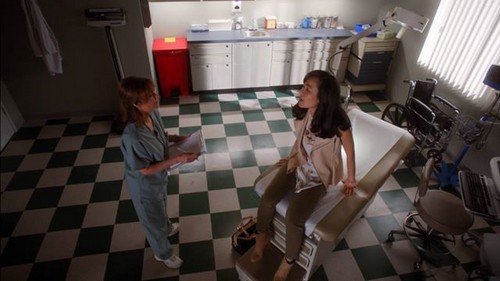 Tonight on ABC their new drama MISTRESSES continues with an all new episode called, “Surprise.” On tonight’s show as April works with the FBI to help them find Paul, she tries to keep Lucy in the dark about what’s going on between her and Daniel. Meanwhile, a former lover has startling news for Karen, who ends up doing some soul-searching; Savi’s “real” date with Zack takes a turn for the unexpected; and Joss has a falling-out with Harry over his romancing their boss.

On the last episode April faced the ultimate betrayal, Joss shocked everyone with a big announcement, Jacob made Karen a tantalizing offer and Dom was determined to beat Toni at her own game. Did you watch the last episode? If you missed it we have a full and detailed recap, right here for you.

On tonight’s show April, in the middle of helping the FBI pinpoint Paul’s location, tries to keep her daughter Lucy from finding out what’s really going on between her and Daniel. One of Karen’s former lovers has startling news for her, causing her to do some soul-searching. Savi goes on a real date with Zack but it turns into something that neither could have predicted. While Joss is planning her engagement party, she and Harry have a wicked argument about him romancing their boss, the supermodel.

Tonight’s episode of Mistresses begins with Karen opening her door and she is shocked to see her one night stand, Ben, from months ago standing on her doorstep. He is confused how he even found her since she lied to him and told him that her name was Rebecca. He announces to her that he is sick, he doesn’t know how long he has been sick or when he got it, but she needs to see her doctor ASAP.

Josslyn is venting to Harry about her latest relationship woes at the restaurant, while he squirms uncomfortably. He finally snaps and interrupts her and says that they aren’t business partners and they aren’t family anymore and he’s not her girlfriend and he doesn’t want to hear it. Josslyn stares at him shocked.

Savi heads out on her date with Zack, and they go to a fancy restaurants. He starts telling her about bikes that he is remodeling and Savi seems uninterested so he asks her about her job as a lawyer. She says she started because she was obsessed with LA Law, but he has never heard of that TV show. They stare at each other awkwardly, and have no idea what to talk about next.

Daniel arrives on April’s doorstep and she lets him in, he says one of the guys from the FBI will be there soon to “set up camp.” He tries to tell her that he never meant to hurt her, but she cuts him off and tells him not to pretend that he cared about her as much as she cares about him. She asks what is going to happen to Paul, and he won’t answer her. He tells her that they have given Paul “more than one chance to do the right thing.”

Joss goes shopping with Scott’s mom, and vents to her the entire time about how Harry is being a “royal pain in the ass.” Scott’s mom interrupts her and asks if there is something she should be worried about, she scolds her and tells her that it is “unseemly for her to talk about another man so much.”

Zack calls Savi and asks her out on another date, she declines and says that she is working on a huge case. He apologizes for taking her to such a fancy restaurant and not being himself. Savi tries to say that she just isn’t ready to start dating again, but Zack won’t take no for an answer. She caves and agrees to go on a second date with him after work.

April’s house is swarming with FBI agents, they agree to set up their command center upstairs in April’s bedroom. While Daniel and April are talking in the livingroom Lucy barges in and says that she “forgot her I-POD,” she is clearly surprised to see Daniel standing there with her mom.

Scott pays Harry a visit and says that he needs his help picking out an engagement gift for Joss, apparently the luxury car didn’t go over well. Harry says that instead of buying something showy, he should buy her a personal gift. Scott says that is why he came to see him, he was hoping Harry had an idea of what to get her since he has known her since she was a child. Harry says he will think about it, and Scott goes to leave. As he is walking out the door, Harry says that family is everything to Joss and right before he died he gave her a stack of records. He thinks that Scott should get her a record player so that Joss can listen to the records. Scott thinks that the record player is a little small, he is going to get Joss a jukebox and program all of the songs in to it.

Meanwhile Joss is venting to April about how annoying Scott’s mother is. Karen thinks that Scott’s mom may have had a point, and she probably shouldn’t have spent the entire time talking about Harry. Joss asks her what happened at the doctor’s office. Karen admits that she couldn’t go through with it, and she’s not ready know the results. Joss tells her that there was one time that she was positive she had HIV, and she was scared to go to the doctor, so she went to the beach and sat on a rock and stared at the ocean. It put everything in perspective for her and then she went to the doctor and found out she wasn’t positive.

Savi and Zack head to a hole in a wall bar called the Crab Shack that he frequents. The band calls Zack up on stage to sing for them, and he argues that he only does it when he is drunk. Savi convinces him to go up on stage, and Zack joins the band and begins belting out “Hooked On A Feeling.” After dinner they head outside and Savi is shocked to see that her car has been towed. Zack offers to take her to the car lot on his motorcycle, while they are flying down the street Savi has a panic attack and screams at Zck to stop. When he finally pulls over she hops off the bike and freaks out on him.

Karen heads to a church, a woman greets her and she tells her that she has never been to the church before but her friend April is a member. She confesses to the woman that she hasn’t been to church in many years because she isn’t sure if she believes in God anymore. The woman tells her “you don’t have to believe in God to believe.” The choir begins belting out a tune and Karen is mesmerized by them.

At April’s house her phone rings and the FBI men spring in to action. She picks up answers the phone and it is Paul, before he can say anything April says “The FBI are on to you Paul,” and he hangs up. Daniel shakes his head, and April is handcuffed and taken down to the police station. Dom arrives and says that he will be representing her as her lawyer, the FBI agent says “good she is going to need one.”

Harry agrees to move to move the soft opening to next weekend for Greta because of her scheduling conflict. While he is prepping the opening meals with the chefs, Joss storms in to the kitchen furious. She demands to know what is wrong with him and why he agreed to do it next weekend when her engagement party is next weekend. He apologizes that he forgot about her party, he begins screaming and throws the dishes on the floor, he says it’s “not like this wedding is going to happen.” He informs her that the whole thing is ridiculous and he isn’t about to lose the restaurant because of her first marriage. Joss informs him that everything Savi said about him was right, he is mean as a snake, and it’s his fault his marriage failed.

Zack shows up on Savi’s doorstep and she invites him in. He apologizes profusely for what happened the night before. She apologizes too and says it wasn’t his fault, she was just terrified and thought that she was going to die. She had one of those moments that everyone talks about where you see your life flash before your own eyes. She says she had a moment of clarity, and she felt something real and true.

One of the men that Paul works for shows up at his motel room, he swears he didn’t tell the FBI anything. The man tells Paul they have to go and he will explain it to him in the car.

Joss arrives at home and Scott surprises her with a record player and plays one of her Dad’s records. He says he wants to play it at the wedding so that it is like her dad is there with him. Joss cries and hugs him and thanks him for asking her to marry him.

Karen finally heads to the doctor to get her blood test done, meanwhile April sits at the police station with Dom.