Mistresses Live Recap: Season 2 Finale “Till Death Do Us Part” 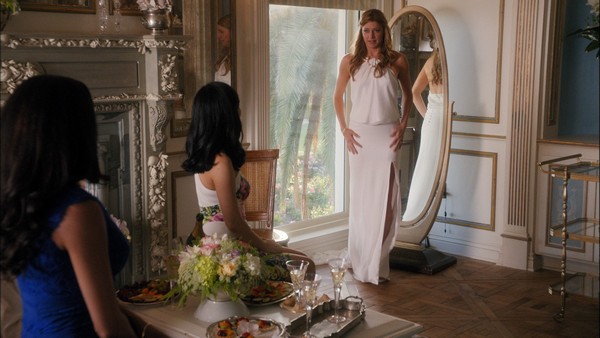 Tonight on ABC their new drama MISTRESSES continues with an all new episode and the season 2 finale called, “Till Death Do Us Part.” On tonight’s show in the second-season finale, Joss plans her engagement party as Scott arranges another surprise for her. Meanwhile, Karen awaits some test results; April turns to Daniel to protect her and Lucy; and Savi considers revealing that she’s changed her mind.

On the last episode, April, in the middle of helping the FBI pinpoint Paul’s location, tried to keep her daughter Lucy from finding out what was really going on between her and Daniel. One of Karen’s former lovers had startling news for her, causing her to do some soul-searching. Savi went on a real date with Zack but it turned into something that neither could have predicted. While Joss was planning her engagement party, she and Harry had a wicked argument about him romancing their boss, the supermodel. Did you watch the last episode? If you missed it we have a full and detailed recap, right here for you.

On tonight’s show anticipation, tension and mixed emotions swirl around the lives of the four girlfriends as they prepare for Joss’s big engagement party. Karen anxiously awaits the results of her HIV test, April must rely on Daniel to keep her and Lucy safe from her ex-husband’s violent enemies and a dejected Harry must decide if he should help Scott with yet another surprise for Joss. Meanwhile, Savi wonders if she should admit her change of heart.

RECAP: There’s still some tension between Harry and Joss. Although it’s for the wrong reason. During one of their events they tried to ignore each as best they could when incidentally they were forced to stand close to each other for a photo op. Joss didn’t want to touch him, but he sure wanted to touch her.

And the awkwardness didn’t end there. The next day they were going over business matter and out of nowhere Harry finally decided to apologize for hurtful comments from earlier. Then when his apology was getting him anywhere thanks to Joss not wanting to accept it – he kissed her!

Harry obviously has feeling for her and he chose the worst time to confess it to both himself and her. Joss is getting married and her sister (namely Harry’s ex) recently figured out she wanted a second chance with Harry. Savi came to that conclusion after one too many nights with an adrenaline junkie. After that guy nearly killed them by aggressively speeding on his motorcycle – Savi realized the only person she saw in potentially her last moments on earth was Harry.

So Savi wants to explore what that means and Karen warns her not to open that door unless she’s sure. However Karen later learns from Joss that the door might not even be an option for Savi. Joss had told her about the kiss and when asked about how she felt – Joss merely said she can’t as in she’s not allowed to have feelings for Harry. Which really isn’t a yes or a no.

While Joss is struggling to identify her feelings, her fiancée on the other hand so wants to marry her that he even went to Harry asking for advice on how to deal with Savi and Joss’s mother. Harry felt so guilty about what he did earlier that he actually did Scott a favor by reassuring him. He also help took off the stress when he told Scott that Joss’s friends will always be there for her. And that includes the special surprise Scott is planning.

Though he was wrong. There’s a chance not all of her friends will be able to attend the engagement party.

Daniel contacted April about the danger surrounding her family. Because, although, April didn’t help the feds – the fact that she was in several meetings with them – it could be assume by certain group of people that she’s all too willing to talk about what she knows. So her and her daughter’s life is in danger. And Daniel came to her wanting to protect them both.

He found a secluded cabin and took the girls there. Then once he had shown to her that was capable of keeping them safe – she fell back into some old patterns with him. So as she’s living every girl’s dream out in the near wilderness – the preparations for the engagement party continues on.

Then there’s Karen. She’s worked herself up into a state. The test results haven’t come back yet and already Karen believes she has HIV. And just thinking that has made her act out of character. Now Karen has been known to be reckless but never violent. She went over to Ben’s place and simply punched him.

What he saved her from falling into a pit of a despair though was her former patient. It made Karen realize how good she has been to other people if not herself. So she did go to the engagement party. And there she had to comfort April who was also lucky to make it.

April was only able to do so because Paul was murdered and she’s been feeling guilty about withholding that from her daughter. But Karen told her that something like that would have only have served to hurt their relationship. Lucy didn’t need to have a father again just to lose him.

Karen told April to think about the recent events as a fresh start.

Everyone minus Harry (Joss asked him not to come) came to the engagement party and as it turns out it was more than an engagement party. Scott secretly arranged for them to get married at the party and it was this great thing he did by setting it up. And so Joss tried to be happy, but a part of her was thinking about the what ifs. What if she chose Harry?

So when he shocked her by coming to the wedding anyways – she ran to him. And it was merely poor timing that Savi went looking for them while they were tearing each other clothes off on the beach.

We never got to see if Savi saw them, but fingers crossed that next season will reveal the answer in the first five minutes! And in a sad piece of news, Lucy found out about her father from the news rather than from her own mother!

What will Savi do if she find out and how is April going to win back her daughter’s trust?