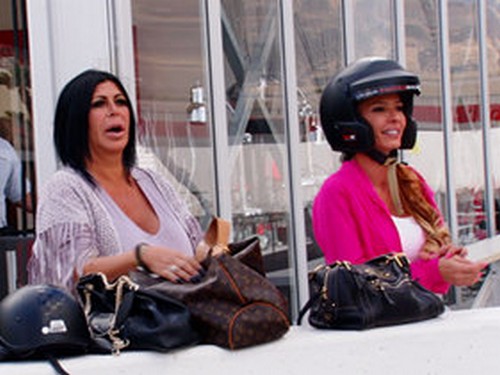 Tonight on VH1 their docu-soap series MOB WIVES continues with an all new episode.  On tonight’s show called, “Vegas Part 3,” a trip to Las Vegas ends with the ladies visiting a strip joint. Did you watch last week’s episode?  We did and we recapped it right here for you.

On last week’s episode the girls starte their first morning in Las Vegas trying to get Natalie and Renee to reconcile their issues. However, Renee had very little room for forgiveness. The conversation between Natalie and Renee quickly escalated into a shouting match and ultimately turned physical–more than once. The other three girls were forced to take turns hanging out with Renee and Natalie separately, secretly hoping to find a way to get them to resolve their issues before someone gets hurt. Amidst all the tension, Drita headed down to the casino to try and win back some of the thousands of dollars she lost her first unlucky night at the tables. When Renee finally reached out to Natalie and is rebuffed, it not only threatens to further ruin their trip, but also changed the group forever.

On tonight’s episode the women decide to make the most of their last night in Vegas by going to a strip club. When they get back home, Drita has to come clean to Lee about the $8,000 she lost and Alicia has to face the reality of Eddie’s sentencing.

Tonight’s episode is going to be another drama packed one, which you won’t want to miss. So be sure to tune in for our live coverage of VH1′s Mob Wives Season 4 Episode 6 at 10PM EST! While you wait for our recap, hit the comments and let us know how excited you are about the new episode of Mob Wives tonight.

Tonight’s episode of Mob Wives opens at Las Vegas Motor Speedway 9the girls are still on their Vegas Vacation). Renee is already upset because all of her friends have the nerve to be nice to her nemesis Natalie. While Drita is out on the race track, Renee approaches Alicia. She wants to know why Ang and her are not being loyal to her. Renee has crossed a line, Big Ang is not going to stand there and let her question her loyalty. Renee gets upset and storms off, hopping into the limo and leaving them at the tracks.

Drita, Alicia, and Ang decide to have a calm girls’ night. Drita confesses that she lost enough money at the casino to buy a car. She has spent all of her savings. They head out to a restaurant for dinner together. Drita thinks that Renee has been walking around and “acting like Al Capone.” Big Ang says that she has finally “met her match” and she “picked on the wrong one” with Natalie. Drita says Renee is a “spoiled brat.” Ang is scared if she doesn’t lay off from the pills and booze they are going to find her dead.

Meanwhile back at the hotel Renee is calling her son AJ, and crying to him that she is “falling apart” and she is “disappointed with herself.” She confesses to him that she put her hands on Natalie, AJ tries to tell her to calm down and let everything go. Renee calls Natalie out of her room to talk to her, she confesses that she “barely remembers what happens.” Natalie reminds her that she tried to apologize to her numerous times, and that Renee called her a “puppet.” Renee apologizes to her for putting her hands on her. Natalie accepts Renee’s apology.

Drita, Ang, and Alicia return from dinner and are happy to find out that Natalie and Renee have made up. Renee flushes all of her pills down the toilet. They all head out to finally enjoy their vacation, at a strip club. Renee wants to go “balls to the walls.” And she does, she hops on stage, and dances on the stripper pole.

The next day the girls have to pack to head home, but they are extremely hung over. They all agree that last night was the best night of the trip. Renee announces she is “getting back on the wagon,” and she’s quitting drinking again. Alicia is not excited to go home and deal with reality, it is almost time for her husbands’ sentencing, and then her sentencing will follow.

Natalie is back home in Philadelphia, she heads straight to work at her family’s funeral home. She works with the families, and sets up all the arrangements, down to putting make-up on the corpses.

Alicia is at home preparing herself for her husband Eddie’s sentencing. Her son Anthony is home to get more of his stuff to take back to college with him. They find a letter in Anthony’s room that his step-dad mailed to him back in 2010. Anthony asks her what is supposed to happen when she goes to jail, and where her kids are supposed to live.

Drita is back in Staten Island working at her make-up store. She still hasn’t told Lee that she lost all of her money in Vegas. She decides to call him and tell him so that over the phone, that way she doesn’t have to worry about him freaking out on her. She confesses that she lost $8,000.00.

Alicia is at home with her boys preparing them for Eddie’s court date, he is going to be sentenced tomorrow. Ang and Renee are worried about Alicia, they know that whatever happens tomorrow is going to change her life.

The next day Alicia meets up with Renee at a restaurant. Renee is waiting eagerly to hear about the sentencing, but Alicia reveals that it has been postponed, and bursts into tears. Renee comforts her and tells her from now on she is going to be there for Alicia, and be a shoulder for her to lean on.