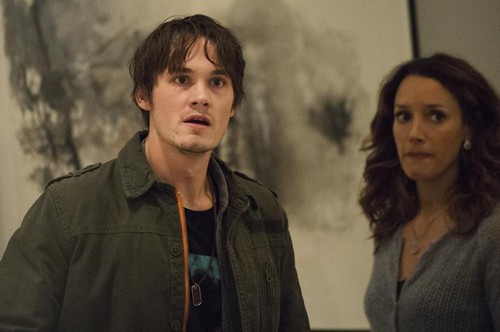 Tonight on ABC MOTIVE continues with a new episode called, “They Made Me a Criminal.”  On tonight’s show a seemingly straightforward case of self-defense during a home invasion turns out to be more complicated than originally thought. Meanwhile, tensions flare when Cross asserts his authority and Angie pushes back.

On last week’s episode Detectives Flynn and Vega investigated a suspected suicide victim who may have had some unwelcome help ending his life. Meanwhile, the Metro Police Department homicide team had a new Commander, Sergeant Mark Cross – a charismatic former undercover detective with a mysterious link to Angie’s past.  Did you watch last week’s episode?  If you missed it we have a full and detailed recap, right here for you.

On tonight’s episode Detectives Flynn and Vega discover that what initially looks like a case of self-defense during a home invasion is actually something much more calculated. As they work to determine the motive, Cross asserts his position, and this new approach doesn’t gel with Angie, leading to tension within the team.

Tonight’s episode is going to be an exciting one that you won’t want to miss, so be sure to tune in for our live coverage ABC’s Motive tonight at 9 PM EST! While you wait for the recap, check out the sneak peek of tonight’s episode below!

The newest case to come across Flynn and Vegas’s desk is murky. It should have been standard self-defense and yet the detectives believe there to be more at play here.

Miles Balfour called in a dead body at his own house. He claimed he shot a man in self-defense after the victim broke in. The victim, Dustin McEvers, reportedly broke in and even after he noticed that Miles was still on the premises – continued to wreak havoc. He allegedly followed Miles armed and with the intent on killing him. But Miles got the better of him. At least according to his version.

The beginning of every episode starts by identifying the victim and the killer. So the audience always knew Dustin was going to die. They were just given a different killer than the one that actually confessed to the crime.

Miles’s wife is the killer! And that’s why it doesn’t come as a big surprise when a relationship was revealed between Sophia Balfour and Dustin. Sophia was a dance studio owner/instructor and Dustin was a career criminal. At first glance these would never meet, but somehow they did.

Sophia was arguing with Dustin in the days leading up to his murder. She kept telling him that they needed to end things and yet she always came back to see him.

It sounds like an affair. Even her husband thought so. He began to suspect his wife when she started hiding phone conversations from him. So what does any paranoid husband do next? He puts a tracker on her car. It’s to help monitor her because there’s only so many times he can “surprise” her at work to make sure she’s there.

But Sophia wasn’t having an affair with Dustin. She met him through her son and seeing as Dustin is a notorious drug dealer – Sophia had a reason to hate Dustin. He was her son’s drug dealer. Although the son swears they were more like friends than they were like victim and enabler. Ryan Balfour is an addict and his mother has been sneaking around behind her husband’s back in order to see her addicted son.

The Balfour family fell apart due to Ryan’s problems. His father gave up on him. His mother on the other hand never could. She wanted to help her son get clean and the only thing standing in the way of that was Dustin. In the beginning, she tried paying off the dealer. She would give him money to stay away just long enough to get her son clean. Then Dustin would worm himself right back into Ryan’s life.

It became a cycle and Sophia finally snapped. She killed Dustin and her poor husband took the blame. He came home early expecting to find her with someone else and what he found was a body. He thought Dustin had come in demanding money and making threats since that’s what his wife told him. She said it was self-defense and her husband then arranged things to protect her.

Too bad she lied!

The real story is that Sophia lured Dustin to the house. She promised to make a big one off payment to the tune of 25,000 and the eager dealer took her up on the offer. He was probably going to take the money and still sell to Ryan. He seems to be that type and Sohpia had him pegged as that type. Once he was inside of the house – she shot him. And her husband came in seconds later.

Flynn and Vega never wanted to buy the self-defense line. They had to keep butting heads with their new Sergeant simply because of their resistance. Cross wanted proof and it took some time before the detectives could get it.

What helped was that they found the tracker that was still on Sophia’s car. Her husband forgot all about it while he was helping his wife cover up a crime. But the tracker lists all the places Sophia’s been in the last couple of days. So they saw her go to Dustin’s house and they also noted the time she came home. Both the first time and the second time when she pretended to act all shocked.

Lastly, the realized the common link between Sophia and Dustin when they checked both phone records. All it took was bringing in her son to get Sophia to talk.

She admitted to killing Dustin and she also confessed to deceiving her husband. She had been planning to murder Dustin for the longest. There are records of her at a shooting range and she has a bruise on her should from when she practiced shooting a gun.

A mother’s love holds no bounds. She wanted to make sure her son would stay clean so she killed his enabler and now that Dustin is out of their lives – Ryan has a chance. Even though she won’t be around to see it.