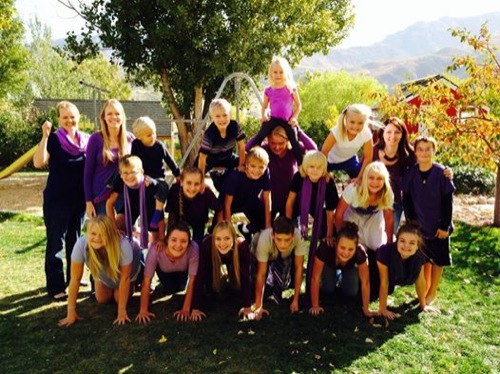 Tonight on TLC My Five Wives returns with an all new Sunday October 19, season 2 premiere episode called “Mending Marriages.” On tonight’s show in the Season 2 premiere, Brady arranges another date with Robyn to take another stab at their anniversary celebration. Meanwhile, Nonie is worried about getting pregnant; and three daughters are ready to graduate from high school and are planning to move out for college.

For those of you unfamiliar with My Five Wives, the show follows Brady Williams as he balances the needs, hopes, frustrations, and fears of each wife along with his own, the special offers a candid and open look at this controversial lifestyle, and goes behind closed doors to share the intimate details and complicated decisions they have to make as a larger than average family.

On tonight’s episode, Brady attempts to heal his relationship with Robyn by arranging an anniversary re-do date. Nonie worries about her difficulty getting pregnant. Big change is coming since three daughters are graduating high school and want to move out for college.

We will be covering My Five Wives premiere tonight at 9 PM EST so don’t forget to come back to this site for our full and detailed recap.  Make sure to refresh often to get the most recent details.  While you wait for the recap, let us know how excited you are about seeing the Williams again, a progressive polygamist family.

Nonie takes a pregnancy test and tests negative. She’s getting nervous that it hasn’t happened yet, and cries to Brady. “Maybe it’s not meant for me anymore,” she says, but he says they haven’t been trying that long. Nonie is 35. Brady jokes that for all 24 children, all he’s had to do was look at his wife and she got pregnant.

Rosemary spends more time with the kids now that they and she are out of school.  Robyn has also finished a semester of school and is working on a book.

Rhonda is feeling great, but needs to take a follow-up mammogram, which she’s nervous about.  Paulie and Brady are coming up on their 23rd wedding anniversary, but she has more time on her hands now that her kids are leaving the nest.

Brady and the wives have their weekly organization meeting. They plan a graduation party/camping trip for the kids who have graduated this year. “From past experience, getting 30 people up to camping is crazy,” Rosemary says.

Rosemary, Paulie and Robyn talk about their kids who are graduating, who seem to be bound to move out soon. The wives agree the kids moving out may be good for them and that they wish they hadn’t missed some opportunities in their own lives.

The fundamental Mormon household where Robyn grew up had very strict rules and as a result, was in her home until she got married, missing many opportunities such as living on campus. Paulie never felt it was an option to move out and go to college.

Brady reflects on how he screwed up last year by not getting Robyn a ring for their 20th anniversary after getting one for another wife on theirs. He takes her to a jewelry store for a ring, saying the closest he’s gotten to being left by a wife was Robyn. He says she may have thought he seemed indifferent, but that is definitely not true. She says he still doesn’t fully understand her sometimes and could be more patient with her.

Robyn talks to Rosemary about Brady getting her a ring. Rosemary talks about how all of the wives struggle with questioning if he really does love all of his wives equally.

Rhonda asks Nonie if she was pregnant. Nonie says she’s worried she’s just getting too old because it’s never taken effort in the past. Rhonda mentions she only gets him once every five nights. ‘I don’t want to force life to happen, but there’s always the thought something’s wrong with me,’ she says. Rhonda offers her some suggestions.

Brady asks Rosemary about the three kids possibly moving, saying he doesn’t really like that idea. Rosemary says she thinks it will be good for her daughter, but not good for her.

The kids do look at apartments.The university housing has too many rules, but a house they look at is much better.  Nonie took Rhonda’s suggestion and is using a calendar to try and track her ovulation in order to plan to try for a baby.  The triplets are still unsure if they want to stay at home or move out, considering possible issues like financial problems.

Nonie and Brady talk about the baby thing again. Nonie asks if he wants her to tell him when it’s a good time based on her calendar. “You don’t have to give me any warning, I’m good to go,” Brady says.

Lauren does Robyn’s hair in anticipation of a date with Brady, who has a surprise for her. Robyn feels like she’s been lost in the group, but she needs to know her marriage with Brady is important.  “I hope Robyn sees my heartfelt devotion to her,” Brady says.

Brady takes her to a barn, where he presents her with a ring. “I’m so excited to get this ring,” Robyn says. “It’s not just about this ring, but it’s more about us.”

Brady reads her a poem he’s written about his devotion to her. “I really need to not take any of my wives for granted,” he says. “They need to be cherished.”

Robyn feels that the date has really healed something in her and their relationship is only going to get better from here on out.

The other wives go to Robyn to see the ring and hear about the date. At the same time, she doesn’t want to rub in that she had an amazing special date with Brady. Rosemary is happy for Robyn and proud of Brady that he stepped up and did something special to make up with Robyn. “Honestly, I guess I’m a bit jealous,” Nonie says. She says she’s never seen that romantic side of Brady before. “It was way above and beyond anything I got,” Paulie says. She adds that maybe Brady felt like he needed to do that for her, so it’s good.

The family goes on the graduation/camping trip. Nonie says putting the campsite together is kind of a metaphor for their relationship; everyone does their own thing and hopes it all comes together. The wives and Brady each give a message to the graduates.