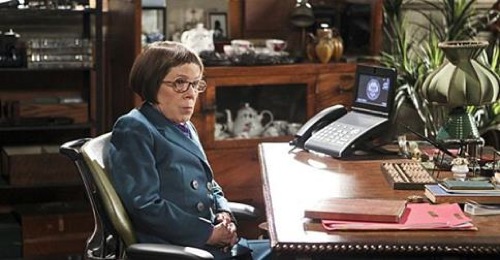 Tonight on CBS NCIS: Los Angeles continues with an all new Monday October 20, season 6 episode 4 called, “The 3rd Choir.” On tonight’s episode the team members desperately search the city when they learn that someone from their past is targeting one of their own. Meanwhile, operational psychologist Nate Getz visits Nell to help her through a traumatic experience.

On the last episode, the NCIS: LA team took action to protect one of their own while being interrogated by the Department of Justice. Meanwhile, Nell went undercover as Hetty, and Director Leon Vance gave Hetty disturbing news while she was in Washington. Did you watch the last episode? If you missed it, we have a full and detailed recap right here for you.

On tonight’s episode when the NCIS: LA team learns that someone from their past is targeting one of their own, they desperately search the city. Meanwhile, Operational Psychologist Nate Getz visits Nell to help her through her traumatic experience

There’s a reason why the team fears the return of Mattias Draeger and it’s about more than just their good friend Hetty’s safety.

Mattias is simply dangerous to have around. He was barely in the country for more than a day before he started killing people again. But while having someone like Mattias (a killer with a vendetta) so nearby would usually mean all hands on deck for the NCIS team – Jones is currently MIA. On last week’s episode, she killed someone and that was the first time she ever discharged her weapon.

Hence, she’s dealing with a few things and if her calling in a sick day is inconvenient then so be it. Nothing anyone is going to tell her is going to make her suddenly feel better. And if someone were to attempt to surprise her – she might accidentally shoot them.
Jones hasn’t been able to let go of her gun since the incident!

Meanwhile, Hetty has shockingly been offered a job in Washington. Vance and even the admiral both told her she could rise to all new heights if she, you know, merely stayed put in Washington. Yet Hetty envisions returning home and to her job. That is if she still has one.

Though, she’ll most likely survive her public flogging – Hetty made sure Vance wouldn’t manipulate things in the hearing with the Department of Justice. She let it be known that she can (out of old age of course) mistakenly reveal where all the bodies are buried.

However Hetty later changed her mind about staying for the hearing. Once she had heard from her people back home, namely Granger; she devised another “prison” break. But this time she didn’t even bother with faking a heart attack. She just walked right on out.

And no was able to stop her because he set off the fire alarm thereby making illegal for a certain congressman to lockdown the building.

Granger had told Hetty about Mattias. And he was forced to tell her about Callen. Not only did Callen put up his own money as bounty for Mattias but he’s also informed some of the city’s toughest about said bounty. Meaning there’s a free for all going on in LA.

Although catching Mattias was never going to be easy. When they did find out about the man he had killed earlier – they surveillance the site and ended up falling into Mattias’ trap. Mattias wanted to draw the men there in order to kill them and finally have them out of the way so he could then target Hetty. Yet the plan failed in spite of him receiving some unexpected help from a Russian National.

If the Russians have their hands in what’s going on then a quick capture and imprison is not going to work with Mattias. So Callen and Sam paid a visit to an old acquaintance of theirs. They went to see Arkady.

He was the team’s best shot at knowing what the Russians had been up to but instead of helping – he warned them about an oncoming second Cold War. It seems the conflict started up again and this time it’s not going to be considered all that cold. The Russians are looking for a fight and so they want someone like Hetty. She’s been around a long time and in her years of service she must have picked up at least several good state secrets.

And that’s where Mattias comes in. He was sent to fetch Hetty and take her back to Moscow. So he set up a second trap and this time the team wasn’t so lucky. Mattias had planted a bug on all of their cars and that ensured one of them would show him how to reach Ops headquarters.

Mattias arrived at the building a few minutes before Hetty did. And their final standoff (old school to say the least) was all about mind games rather than just a rain of gunfire. Hence Hetty was able to convince Mattias to turn himself in and the only person who was injured during the few times a gun was fired was Agent Wallace.

And getting shot might help improve her relationships with the people she was investigating but who saved her life anyways!

Hetty is back and Mattias has been neutralized. Though most of that wouldn’t have been possible without Jones’s help. She pulled through at the last second and showed up to support Hetty when she needed her. So, as it turns out, she is field agent material.