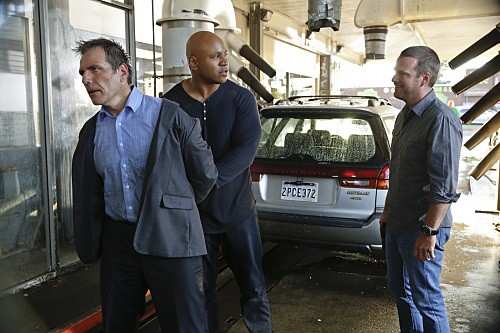 Tonight on CBS NCIS: Los Angeles continues with an all new Monday November 10, season 6 episode 7 called, “Leipei.” On tonight’s episode, when a man is murdered by a small drone, the team discovers his connection to a terrorist group that is planning another local attack. With time running short, Nell [Renée Felice Smith] must use her drone expertise to try to divert a disaster in Long Beach.

On the last episode, when Sam is arrested for murdering a woman, Callen and Granger work to clear his name. Meanwhile, Kensi and Deeks discover a link between the victim and a student from Sam’s past. Did you watch the last episode? If you missed it, we have a full and detailed recap right here for you.

On tonight’s episode as per the CBS synopsis, “the “NCIS LA” team will discover a man that has been killed by a drone. What’s more is that they will find out it’s not just some random or ordinary murder. The victim is part of a terrorist group that is planning another attack in California, around the Long Beach area. Once again, the team must rely on Nell and her tech expertise regarding drones. Unfortunately, time is ticking and they must work fast to prevent the terrorist group from accomplishing their plans of causing mayhem and death.”

A seemingly uninteresting man was killed by a drone on tonight’s episode of NCIS: Los Angeles and somehow that case wounded being assigned to the NCIS team. As the story goes, after cops were initially called to the scene, the victim was identified as being Elias Minas. A Greek citizen that was once involved the in the notorious gang known as PK.

Because of his association with a group known for their domestic and ambitious acts of terrorisms – Elias was supposed to be on the no fly list. Yet, for some reason he managed to get around that and fly to LA. Apparently, Elias had made a deal with Homeland when he first attempted to enter the country on his own. And, seeing as Elias didn’t want to spend the rest of his life in jail, he then chose to turn on his “friends” at the first opportunity he got.

In return for helping the Greek government arrest several prominent members in PK he was then granted immunity by the Americans and was even allowed to enter their witness protection program.

Although, as it turns out, he didn’t really what to live his life according to someone else’s rules. Elias disappeared not long after entering witness protection. It seems someone had forgotten to put his new identity on the no fly list so Elias was able to travel to wherever he wanted to go. And it was the Americans that helped him do it.

Now, fast-forward to the present, and Elias was murdered. So at first the team assumed some of Elias’s old friend in the PK might have finally gotten to him. But they aren’t claiming reasonability and if it had been them – they would have bragged.

So who sent a drone after Elias Minas?

That’s the mystery and everyone wants to know the answer. It’s actual imperative that they do because once the team started to check into what Elias had been doing in LA – they soon realized that he had created a drone himself. However the one he was ordered to make was much larger than the one that ended up killing him.

According to the theory the guys are working off of, Elias was hired to create a drone and someone had simply used his semantics to create a much smaller one to then target him with. In doing that they knew they would remove all witnesses and, frankly, the only evidence there is of there being a second drone will merely link back to Elias its designer.

Though the group now operating a full functioning drone weren’t as smart as they themselves to be. Getting cocky proved to be their downfall because they soon made a mistake just as everything was working in their favor. And in doing so one of their own got caught in a gun fight with Sam and Callen.

The man they ended up killing was a known (all over the internet by the way so there goes secrecy) as a Live Free First member. From what the tech team was able to surmise – the radical group/cult was completely anti-corporate. They believe money, oil, and anything else they feel is being monopolized should rightfully be returned to the American people. So as part of their manifesto – they said they were going to target the two largest cities known for their corporal greed.

New York City and Los Angeles! And unfortunately for the team, Los Angeles proved to be the nearest target.

Live Free First were going to target the South Shore Oil Refinery. And if they succeeded the following blast would have possibly wiped out over a hundred people in the nearby town. So, in the end, the team had to chase down a group of inept terrorists before they accomplished what they wanted to do or failed at doing that thus creating an even bigger mess.

And so to stop the potential catastrophe they had on their hands – Callen with Nell’s help of course had to remotely assume control of the drone. Though he really didn’t know what to do once he had control. So he inadvertently caused a small explosion and luckily no one was hurt by it.

Nell was invaluable in stopping the terrorist attack and that’s why Hetty later took the time to talk her one on one. Hetty wanted to know why Nell has gone after a job in the field. She’s qualified and originally that’s what Nell said she wanted to do.
So why the hesitation?

Nell told Hetty that she still wants to one day work in the field but for now she’s too scared to pursue it. There’s a part of her that never got over the shooting she had been through. So instead of rushing things – Nell wants to make sure she’s ready before she goes after a job that would require her not to freeze up out in the field.