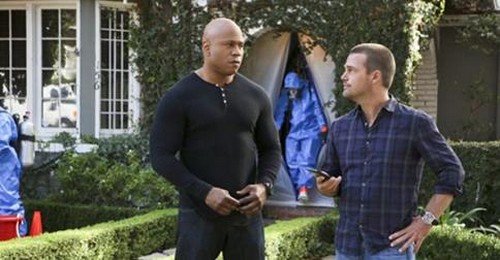 Tonight on CBS NCIS: Los Angeles continues with an all new Monday November 24, season 6 episode 9 called, “Traitor,” and we have your weekly recap below for you.  On tonight’s episode, Hetty [Linda Hunt] orders a lockdown after Granger [Miguel Ferrer] is poisoned by the mole and Eric becomes one of the seven suspects in the case.

On the last episode, Kensi and Deeks went undercover to investigate the murder of a homeless man who was a former marine and CIA agent and discovered his connection to the Mexican cartel. Did you watch the last episode? If you missed it, we have a full and detailed recap right here for you.

On tonight’s episode as per the CBS synopsis, “after Granger is poisoned by the mole and Eric is one of the seven suspects, Hetty orders a lockdown while everyone is investigated.”

Granger was poisoned on tonight’s episode of “NCIS: Los Angeles” and the culprit could be just about anyone among the team.

Granger’s condition was revealed after he crashed his car in a horrific car accident. Apparently whatever was in his system was slow acting. He had enough time to get in his car and be a couple a miles away from headquarters before the effects kicked in and knocked him out.

But this recent accident is just one more on a long list of “accidents” the team has been experiencing. So while Sam and Callen don’t like the idea of it – they’ve come to acknowledge that there may be a mole inside of their unit. And they’re not the only ones harboring suspicions. Hetty is looking at Granger’s situation as another occurrence of a rat inside of her organization.

And as for Granger, he survived yet he doesn’t seem like he’s actually getting better. During the moments when he happens to be lucid, he seemed to back up the theory of an eminent threat. Although another side effect of the poison Granger had digested was that he was weaving in and out of consciousness. So even his lucid moments should be taken with a grain of salt.

The very few times Granger could string a sentence together – he told Deeks and Kensi “it wasn’t safe”. And then he burst into an uncontrollable rage before giving in to seizures. So again – grain of salt.

Though Hetty might not be so lucid either. When she heard about the poisoning, the entire office was searched. And the poisonous flower was ultimately found but Hetty didn’t want to evacuate people in the office. Thereby saving anyone else from getting infected. Instead, she ended up doing the exact opposite by locking the place down. Meaning no in and no out. At best, until she found the traitor!

Hetty has Deeks and Kensi investigating everyone inside of the building. Meanwhile Sam and Callen will be following up leads on the outside.

Hetty is also leaving nothing up to chance. She’s even willing to do a polygraph just so she could be ruled out. But strange things are occurring behind the scenes. Beale has had money transferred into his account recently and he doesn’t know where it came from. So the traitor is essentially throwing as much diversions as they possibly can at the team just to escape notice.

First Beale then a woman mysteriously committed “suicide” while they were still in lockdown. Luckily her death was investigated and Deeks and Kensi saw that she was strangled prior to being strung up but if the traitor can kill someone to act a smokescreen then who’s to say if anyone is safe.

Not surprisingly, people are even starting to view each other with suspicion. Everyone that was red flagged was cordoned off. Including Beale. But there was DN A left behind at the fake suicide. So Kensi and Deeks went into the secluded area to collect samples from everyone. And well that freaked out the rat.

He revealed himself. The somewhat shy and husky Carl that no one had been paying attention decided to grab everyone’s full focus. And he did so when he took Beale as his hostage. He tried to use Beale to open to all the door he needed to escape lockdown. But Beale led him into a trap with Sam and Callen waiting for them at the other end.

Carl was taken into custody soon after that but for some reason his arrest didn’t seem to faze him in the slightest. If anything – he was smiling when he got arrested. He later explained that he had committed one of the biggest security breaches in U.S history. And seeing as no one wanted that kind of information out there for their enemies – he knew he was going to be offered a plea agreement to keep quiet.

So Carl was smug. After everything he did he still felt he had a reason to be smug. Because, at the end of the day, he honestly thought he could play double agent and in return he would get a house on the beach somewhere. However no one wanted to give in to him.

And that led to Sam and Callen putting the fear of God into him by allowing him to believe he was going to be sent into some black hole in which he would never be able to climb out of. They knew if they truly scared him – Carl would reveal who he’s been working for. And as for the rest of the team, they were just glad Carl was going away. He had caused so much damage – they all felt they would be happier never seeing him again!

Though Granger, when he came back to his old self, would probably have loved a chance to meet Carl in a one on one!