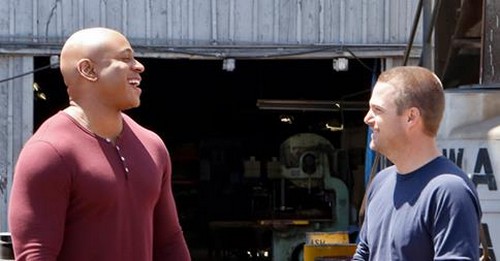 Tonight on CBS NCIS: Los Angeles continues with an all new Monday November 17, season 6 episode 8 called, “The Grey Man.” On tonight’s episode, Kensi [Daniela Ruah] and Deeks [Eric Christian Olsen] investigate the murder of a homeless man, who was a former marine and CIA agent. The probe reveals the victim had connections to the Mexican cartel.

On the last episode, the “NCIS LA” team discovered a man that has been killed by a drone. What’s more is that they found out it was not just some random or ordinary murder. The victim was part of a terrorist group that was planning another attack in California, around the Long Beach area. Once again, the team had to rely on Nell and her tech expertise regarding drones. Unfortunately, time was ticking and they had to work fast to prevent the terrorist group from accomplishing their plans of causing mayhem and death. Did you watch the last episode? If you missed it, we have a full and detailed recap right here for you.

On tonight’s episode as per the CBS synopsis, “Kensi and Deeks go undercover to investigate the murder of a homeless man who was a former marine and CIA agent and discover his connection to the Mexican cartel.”

A new case is testing what little relationship the team has built with Granger on tonight’s episode of NCIS: LA. A homeless was found tortured and murdered. And when his fingerprints were ran through the system – the team was alerted to it. It seems the homeless, Harrison Goodsell, man was once a CIA operative known as Grey man. That means he can basically become invisible at any given time. No one really knows him and no one will miss him. Grey men don’t have families or friends. They just live for their work.

But his skills, that he must have relied on so much in the past, had gotten rusty. Hence he was literally picked up right off a lot the homeless population tend to frequent and all it took was a stun gun.

As they were initially reviewing the case, Granger had told the team not to worry about getting their hands on CIA files. They didn’t have to worry about what information Goodsell was privy to. He said he had already spoken with his CIA contacts and that they said Goodsell had cracked up on the job.

After he had a breakdown, the CIA claimed they cut Goodsell loose and from there he ended up on the street.

However someone is lying. While it had looked like Goodsell was living on the street, there’s evidence of him showing up at restaurants all over the city wearing a freshly pressed suit and even handing out tips. So he must not have been as tapped out or as broken as the CIA were claiming.

Also it can’t have been a coincidence that Granger soon disappeared from the office. He had told Hetty he was having froyo with a dead guy and neither Callen nor Sam could resist following him. They found him meeting with a reluctant CIA operative.

Paul Barnes was in charge of Goodsell’s mission overseas and the truth about Goodsell did end up being more than what Granger was trying to sell. It looks like Goodsell wasn’t let go from his job. He went MIA about a year ago and the agency has been looking for ever since.

Granger thinks Barnes was sent in to kill Goodsell. But Barnes has a different story. He said Goodsell had contacted him. They used to work together and so that meant trust. And Goodsell wanted to return to the fold. He wants to come back in and he claimed to have information that would help make that happen.

Goodsell has been looking into the Pena cartel. Lately, he’s been noticing them using the honey trap on several DEA agents and he had sent a couple of photos to Barnes before he was murdered. Several of those photos pinpointed as to who the two prostitutes used in the scheme were. And from there – the investigation took an unexpected turn.

The team thought the cartel was trying to find ways to keep their boss out of prison. But then they realized they were wrong when one of the men being used in the honey pot scheme, Turner, told them they had already caught Pena. They had enough information on him to extradite him and now they were merely waiting for him to be delivered.

So if it’s not to protect Pena then it must be about freeing Pena. At least that’s what they though. And yet, they were wrong. Turner said that he made a mistake by sleeping with Monica. He told his boss and even the federal agents he didn’t mean to give her so much information but he was hiding something from them.

The DEA had a made a deal with Pena. He would get a lighter sentence if he turned on all the Mexican officials that have helped him keep his illegal activities. So, his former friends turned on Pena and were going to stop him before he could talk.

Though none of that explains how Goodsell got involved. Goodsell, as it turns out, is Turner’s father. He had found out about him last year and immediately disappeared afterwards. It seems he wanted to watch over his son (from the shadows) and when he found out about what Turner had gotten himself ensnared in – he was planning on bringing in the CIA just to help.

Sadly, Goodsell died before he could assist his son. But thankfully his death led to Sam and Callen stopping Turner from committing a federal offence. The boys busted in and helped.

They stopped Turner from killing Pena and Deeks arrived in time to rescue Monica and her daughter. So while it wasn’t much what he did – Goodsell did leave an impact on his son’s life.