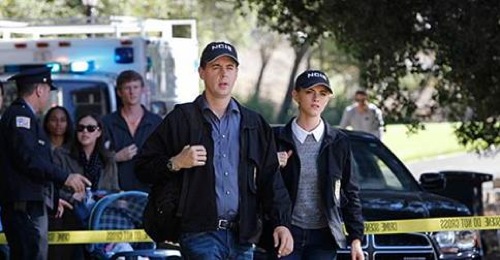 Tonight on CBS NCIS continues with an all new Tuesday October 14, season 12 episode 4 called, “Choke Hold.” On tonight’s episode the NCIS team is assigned to a joint terrorism task force by the Secretary of the Navy after a Naval research scientist is murdered and the chief suspect is wanted by the Russian government. Gibbs and DiNozzo run interference with task force leader Leia Pendergast.

On the last episode when an NCIS case revealed a connection to Ducky’s estranged childhood best friend, he and Special Agent Bishop traveled to London for interviews with family and co-workers of his friend. While there, Ducky found himself reminiscing about the choices he made in his past and the subsequent impact they had on his adult life.Did you watch the last episode? If you missed it, we have a full and detailed recap right here for you.

On tonight’s episode the Secretary of the Navy assigns the NCIS team to a joint terrorism task force after a Naval research scientist is murdered and the lead suspect is wanted by the Russian government. In order to get a jump on the case, Gibbs has DiNozzo run interference with the leader of the task force, FBI Agent Leia Pendergast.

On tonight’s episode, Sofia Glazman was found bleeding alone in a park at night. However, when two officers arrived on scene and attempted to help – she told them not to move her. Pleaded really! It was the only words she could make it while there was a wire currently strapped around her throat. And regrettably no one followed her instructions when the ambulance arrived. The EMTS tried to load her onto the truck and that simple movement enacted whatever device was secretly strangling the poor woman.

The people that were doing their best to help Sofia accidentally decapitated her in the process. And all because of that device.

The device she was strung up on had encountered a technical difficulty. That’s why it didn’t kill her out right. But when she was moved – it started to work again. Which was truly unfortunate seeing as with her death – her attacker has better chance at continuing his or her unapprehended.

You see Sofia was a scientist with Naval Intelligence. And while that sounds all cloak and dagger, her mentor says she was years away from making a big breakthrough. So that begged a question of why anyone would seek to kill her. Because that was their plan with their device. Abby had a look at it and she even called it a sophisticated killing machine.

The only person with any possibly motive seems to be Sofia’s former lab partner. The other woman had disappeared without a trace. Yet finding the elusive partner proved to be more problematic than just locating her. The team needed to handle the possibly capture with kid gloves. Nelli Benin is a Russian national. Hence NCIS first needed permission from their neighbors in the east before they could make a move.

And once they got that, they also received “extra” help in the form of an FBI agent. Leia Pendergast has been put in charge of the manhunt and so far DiNozzo seems to be the only person that’s happy about that. For his own reasons of course.
They’ve been flirting with each other since the moment they met.

Consequently, he was the best man they could have chosen to distract her when the team later found Ms. Benin and decided to pursue their suspect on their own. The team found proof of Benin’s innocence and that made them question why Benin’s own countrymen was so quick to find information against her. The Americans didn’t even have to prod – the Russians merely demanded Benin’s capture.

So the team looked into it and after they had Benin in their custody – they asked her why she ran. And she backed up their theory. The scientist wanted to defect. She was offered a mysterious job in the private sector and turned it down.

Two other friends of hers (one of them being Sofia) were offered the same kind of deal and now they’re both dead. Benin didn’t want to be a third victim and she knew her government wasn’t going to protect her. The offer that started it all was passed on to her from a Russian with ties in the government.

And he wasn’t afraid to tell her about friends. He’s was hoping it would influence her decision to join them.

That’s why her government wants her back but while she will be forced to return home – the team has more important things to worry about. Originally, they had kept Benin’s capture a secret and yet the Russian government somehow found out. And then they demanded she’d be released into their custody.

Director Vance didn’t want to start an international incident so he was going to turn the scientist over. Though he also wanted to know about a possibly leak at headquarters. Because how else would the Russians have known his team had her?

The first time Benin was going to be turned over – her would be killer came after her. Sadly, the assassin killed herself when it looked like NCIS had her cornered. So they never got the answers as to why she had killed Sofia except for their own theories.

Yet when it came time to actually hand over Benin – the team couldn’t it. They faked her death in front of a Russian official.

Thereby allowing her to live out the rest of her life safe from both her government and potential headhunters.

Benin is safe. And Madame Secretary was just pleased when she learned NCIS hadn’t jeopardized international relations in order to acquire Benin’s safety. So all in all a good job.