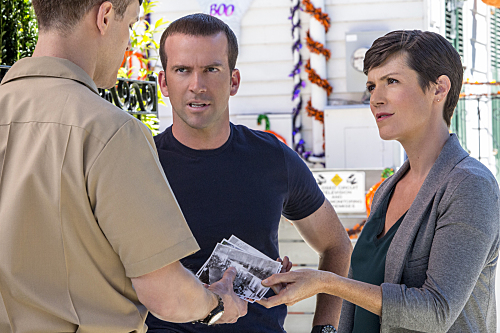 Tonight on CBS NCIS continues with an all new Tuesday October 28, season 12 episode 6 called, “Parental Guidance Suggested.” On tonight’s episode a Navy commander’s wife is murdered and NCIS must determine whether her death is linked to her profession as a therapist or an act of terrorism after finding her husband’s name on a jihadist target list. Meanwhile, the team discuss Halloween costumes and Tony’s recent dating habits.

On the last episode during a joint Coast Guard and NCIS training exercise at sea, Gibbs and CGIS Agent Borin spotted a deceased man overboard, who was discovered to be a missing crew member from a ship 60 nautical miles away. Upon boarding the ship for questioning, Gibbs found himself on a vessel that had been commandeered by pirates. Did you watch the last episode? If you missed it, we have a full and detailed recap right here for you.

On tonight’s episode the NCIS team must determine if the murder of a Navy commander’s wife is linked to her profession as a therapist or an act of terrorism after finding the commander’s name on a Jihadist target list. Meanwhile, the team discusses Halloween costumes and Tony’s recent dating habits.

Whereas most of the team were busy concerning themselves with what Halloween costume they wanted to wear to Abby’s annual party – a new case of theirs thankfully managed to grab Gibbs’s attention at least.

The wife of a Navy commander was murdered on tonight’s episode of NCIS and while the commander himself should be relatively safe for the remainder of his stay on whatever top secret ship he’s on – his young daughter Rachel could very well be the next name on someone’s hit list. Apparently, Commander Ryan ended up on Jihadist hit list a few months ago and because he knew his life was in danger he did try to warn his family to be on the lookout. But despite their best efforts – someone got too close to them and killed his wife. And so now the team have to play it safe with their next move. They have to protect Rachel and seriously consider her life being in danger.

Although they could be wrong about the last part. Further investigation revealed that the original Jihadist list was actually a fake set up by another federal government. It seems that part of the federal government created a fake site to target terrorist living in the states.

But the woman in charge, who also happened to be an old friend of Tony’s, said an extremist group would have made a claim by now if it had been any one of them. So whoever the NCIS team are looking for must be a third party completely unknown to the network she’s been trying to unravel – her little list wasn’t what jeopardized the commander or his family’s safety.

And, for the most part, Ducky agreed with her. He had found something looking at the victim’s corpse. There was some old wounds that hadn’t showed up in her medical file and so when the cause of those wounds were traced – it lead back to a serial killer the commander’s wife had helped put away. The serial killer was just one of the many patient Valerie had taken on. And most of them showed up as dangerous even on paper.

In her long career as a therapist, Valerie Albright had had several patients who have made death threats against her and there was the occasional assault throw in as well. However most her patients that could have killed her are already imprisoned. But what struck Abby as odd is that when she did find the gun that killed their victim – it wasn’t registered to any offender the team all thought it was going to be. The gun turned out to belong to good friend of Valerie’s.

Nathan was his name and he was one of the first people on the scene when Valarie was killed. Though he swears during interrogation that he didn’t kill Valarie. Truthfully, he gave her that gun back when he was having problems and has almost killed himself.

But lately his relationship with Valarie has taken a turn. He started to notice some bruises on Rachel and he thought it her husband doing it. Yet she told him he got it all wrong. Her husband wasn’t the one hurting Rachel. Rachel was doing things to herself.

Valerie was a talented therapist and so when she began seeing her own daughter exhibit certain dangerous signs like a lack of empathy – she tried to get her daughter some help. And little Rachel didn’t want help. She was a sociopath and seeing as her mother kept saying there was something wrong with her – Rachel wrote her off. And did this by killing her.

That way her father had to come back and take care of her. Before the murder, Rachel used to injure herself to get his attention but eventually she realized killing her mother would force her dad to be in charge of her. So the murder would have been a win-win if she hadn’t gotten caught.

When she told her father what she did – he tried to say he killed Valerie. But Gibbs didn’t believe him. He had spent a lot of time in Rachel’s company and he was able to make his own deductions. Rachel was a cold-blooded murderer and she was never going to feel sorry for what she had done.
It just wasn’t in her nature!

As for Abby’s party, it went ahead (despite their disturbing case) and everyone including Tony did their best to have fun. Although his fun included a certain female agent.