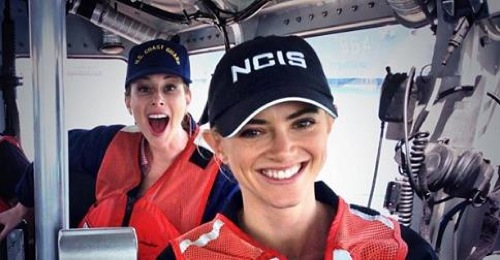 Tonight on CBS NCIS continues with an all new Tuesday October 21, season 12 episode 5 called, “The San Dominick.” On tonight’s episode Gibbs spots a dead man in the water during a joint Coast Guard and NCIS training exercise at sea. The investigation reveals the man is a missing crew member from a ship 60 nautical miles away. Upon boarding the ship for questioning, Gibbs discovers the vessel has been commandeered by pirates.

On the last episode the Secretary of the Navy assigned the NCIS team to a joint terrorism task force after a Naval research scientist was murdered and the lead suspect was wanted by the Russian government. In order to get a jump on the case, Gibbs had DiNozzo run interference with the leader of the task force, FBI Agent Leia Pendergast. Did you watch the last episode? If you missed it, we have a full and detailed recap right here for you.

On tonight’s episode during a joint Coast Guard and NCIS training exercise at sea, Gibbs and CGIS Agent Borin spot a deceased man overboard, who is discovered to be a missing crew member from a ship 60 nautical miles away. Upon boarding the ship for questioning, Gibbs finds himself on a vessel that has been commandeered by pirates.

On tonight’s episode of NCIS, a training mission goes awry when out of nowhere a dead body was found floating in the sea.  Gibbs was the one that spotted the body and rather than immediately turn it over to his highly trained field agent – he asked Bishop to give him her opinion on what happened to their victim. She had failed her earlier testing aboard the ship so by asking for her intake Gibbs was also giving her a chance to redeem herself. However Bishop ran into the same problem as she did before – she only assessed the situation according to procedure. As in she never once considered going with her gut. Even though she was already warned about that!

Then again, not a lot of people tend to take advice coming from DiNozzo seriously.

And that’s why Bishop just thought she failed her mission exercise because of something she did wrong. That she failed somewhere along the lines of following procedure. Hence she keeps rehashing everything she did until hopefully she could find some sort of answer in the there. But she’s never going to find an answer that suits her.

Although McGee is about to find out for himself how hard it is when with faced his own personal challenge. Gibbs and DiNozzo had tracked their floater back to a US Cargo ship but poor luck on their part meant that only one of them was aboard the cargo ship when it was revealed to have been taken over by pirates.

Gibbs was left trapped as someone’s hostage and DiNozzo was the one that had to keep the pirates in charge calm enough to make a deal. Thus that left the investigation for the most part in McGee’s hands. He and Bishop had to look into the pirates and see if there’s anyone else they should alerted to.

The pirates were able to take over the ship when they disguised one of them as a crew member. So prior to anything else – the team needs to know if there’s any more men on the inside!

The pirates want money. They have the entire Navy’s focus so why no use that to their best advantage. And seeing as they have multiple hostages, they demanded a high ransom.

But Gibbs managed to devise a scheme to get him alone with the guy calling himself the leader. The real leader it seems was the floater. Yet something went wrong with the original plan. The captain of the ship had fought back and in the process – the ship’s radio was destroyed. And without those radios, the pirates wouldn’t have been able to contact the shipping company to ransom back the cargo.

All of this, by the way, Gibbs got from the pirate after he had eventually overpowered and slightly injured him.

Meanwhile, what McGee and the rest of the team found out was that shipping company that owed the cargo was being investigated by the government for money laundering. Drug money that is. So the shipping company isn’t really the kind of people the pirates should have been messing with.

And, as things stand, the pirates were never going to get their hands on the money to begin with. The inside man otherwise known as the captain of the ship – had planted a bomb onboard. Then he faked an injury and got off the ship before Gibbs and the rest of the crew could be taken for hostage. He did all of this because he had already stolen money from the ship and plus he had wanted some payback.

The pirate he killed was no accident. It was the same man that held him hostage for hours on end several years ago during a high jacking. And Captain Tom O’Rourke never could forget an insult.

So entrapping the pirates on a ship that was bound to explode while he ran off with the money – was all part of plan that would have worked if it hadn’t been for Gibbs and his team.

Afterwards, everyone was glad to see Gibbs back at his desk. The few hours McGee was in charge was just kind of scary. For a second there it looked like McGee was slowly turning into Gibbs!