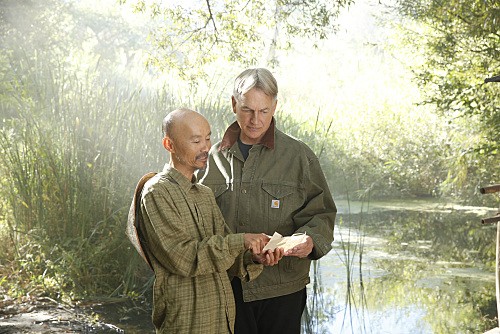 Tonight on CBS NCIS continues with an all new Tuesday November 11, season 12 episode 7 called, “The Searchers.” On tonight’s episode, the NCIS team investigate the murder of a retired master sergeant and uncover a fraudulent charity that preys upon families who are searching for missing military personnel. Meanwhile, Bishop agonizes over the results of her probation evaluation; and Tony [Michael Weatherly] contemplates adopting a stray cat that followed him home.

On the last episode, the NCIS team had to determine if the murder of a Navy commander’s wife was linked to her profession as a therapist or an act of terrorism after finding the commander’s name on a Jihadist target list. Meanwhile, the team discussed Halloween costumes and Tony’s recent dating habits. Did you watch the last episode? If you missed it, we have a full and detailed recap right here for you.

On tonight’s episode as per the CBS synopsis, “after investigating the murder of a retired Master Sergeant, the NCIS team uncovers a fraudulent charity that preys on those searching for missing military personnel. Meanwhile, Bishop agonizes over the results of her probation evaluation, and Tony contemplates adopting a stray cat that followed him home, on NCIS.”

The green eyed monster has become a bit of a problem at the office. Though not in the way you’d expect. On tonight’s episode of NCIS, Bishop was finally able to get the results of her probation evaluation and surprisingly she passed with flying colors. Yet, there’s a slight problem stemming from how high she actually scored on her evals. It seems no one else on her team had ever scored that high so her 82 put theirs 58 and 63 to shame.

At least that what she thought when neither Tony nor McGee corrected her. It was only later, that Bishop realized there really wasn’t a reason to be so thrilled about her score. While she was working a new case with the guys – Ducky and Timmy had inadvertently let her in on an old office secret. They said the lower she scored shows how much Gibbs thinks of you. Apparently Gibbs merely hands out low scores in order to toughen the guys he believes truly has potential.

So, at the end of the day, what does Bishop’s score of 82 really mean? Well, it means that Gibbs might have already have written her off!

Hence Bishop was in a sour mood when the new case the team was dealing with took an unexpected turn. A retired Master Sergeant, Hawkins, was murdered and he was found to have been holding a dog tag from a missing soldier that was reported MIA back in the Vietnam War. However Abby eventually found out that those dog tags were fake. A fact she’s pretty sure the victim knew as well before he died.

And that makes things even stranger because the victim had gone to great lengths to hold those dog tags while he was dying. He basically dragged his dying body several feet just to grasp them. So Gibbs has to believe Hawkins would have only have done that if he wanted to point a finger towards his killers. Whoever gave Hawkins the fakes were also the ones behind his death!

Hawkins had befriended a Sgt. Kent back during the war and his friend had disappeared after they were attacked by the Vietcong. And ever since Hawkins has been obsessed with finding Kent’s remains. Over the years he took on a fatherly and then grandfatherly role to Kent’s family but what he wanted to give them most of all was answers.

And someone has used his noble goals against him because it looks like Hawkins was fooled by some low grade conman. Someone called Caldwell ran a fake organization.

People would give him and his money so that they would do “all they can” to find missing soldiers for their clients. But Caldwell and his partner never followed through with what they told people they were selling.
Instead they took people’s money and in return handed out fake dog tags to raise their customers’ expectations and hopefully get people to pay more.

Then Hawkins came along and he saw right through Caldwell and his partner Price. And he threatened to report both men. Now while Caldwell was more the face of the operation – he wasn’t the muscle. That was Price. So it was up to Price to deal with Hawkins.

And Price dealt with Hawkins by killing him. Then he fled the states and went to Vietnam. Which meant Gibbs and a recently upset Tony had to follow him. Earlier, Tony had found a stray and over the course of a few days he had grown especially fond of that cat. But cats can sometimes be lone creatures and the little fur ball took the first chance it saw at freedom – it ran away when Tony’s maid came over.  So Tony is depressed about losing a good friend.

Meanwhile Bishop is still distraught about her score. She brought it to Gibbs’s attention before he left and Gibbs’s only response was that he changed his teaching method. It seems he’s been taking it easy on Bishop seeing as his old teaching methods have seen many people come and go at the office.

But she told him she could handle it. She said she wanted to prove herself to him and even used Tony and McGee as fine examples of his teaching methods. So Gibbs resolved himself to going back to how things used to be.

And when he was in Vietnam, he caught Price and thanks to Bishop – he found Kent’s remains. Kent had helped a Vietnamese child bury his parents and so when that child had later seen Kent lying dead in the field – he buried his friend near his parents. He did out of respect and had no idea he was causing Kent’s family’s grief.
So when Gibbs returned to the states – he had Kent’s real dog tags and he gave them to Kent’s family so that they may finally have peace.