BY Yellow J on May 8, 2014 | Comments: one comment
Related : Neil Patrick Harris 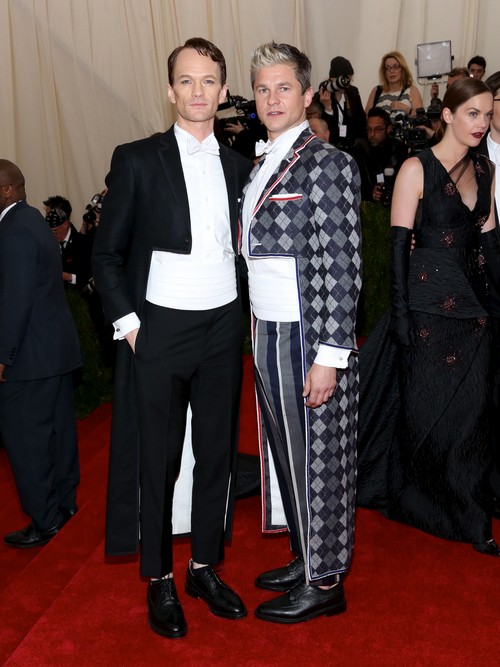 Neil Patrick Harris and David Burtka have been together for several years, and they have two children together, so it is a little surprising that they’re not married yet. Of course, I don’t believe that either one of them would give marriage ultimatums to each other, but that’s what the latest tabloid reports are suggesting. Apparently, David has given Neil an ultimatum stating that if they don’t get married soon, they’ll have to break up.

Apparently, David has been wanting to get married since the beginning of this year, ever since Neil began doing his Broadway play, Hedwig and the Angry Inch. However, the reasons that the tabloids give for David’s sudden desire to get married are ridiculous. Apparently, Neil is drawing attention from men while filming the play, so David wants to get married to keep the attention away. Right, like getting married is going to stop creepers and famewhores from hitting on a celebrity?

A ‘source’ tells the National Enquirer, “[Harris] shed 20 pounds for the role and strips down to his shorts on stage, and now gay men are throwing themselves at him, and it’s is driving David nuts!” Thus, this has somehow led to David telling Neil that if they don’t get married, he’ll ditch him – and all because he’s scare of losing Neil if they don’t get married.

They’ve been together for so many years, and yet they still have petty trust issues like this? I doubt it. I don’t think they would have decided to have children together if they didn’t trust each other not to cheat on the other person, or dump the other person over a marriage ultimatum. I think both of them are just taking their time with getting married, and really, who can blame them? They probably want a fancy, blow-out wedding, but Neil is so busy that it’s probably difficult to plan ahead.