Nene Leakes Is Right: Meryl Davis and Charlie White Have An Unfair Advantage On DWTS (VIDEO) 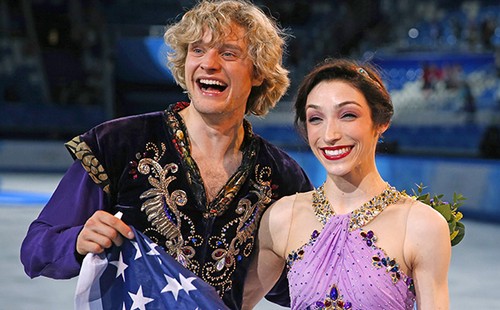 I have to admit, I’ve been waiting for the backlash to start against Meryl Davis and Charlie White. The newly minted Olympic Champions in ice dance have been pitted against each other on Dancing With the Stars and from one angle it’s a great test to see how they do when separated. But on the other hand it is extremely unfair to every other celeb that is competing against them. Nene Leakes finally spoke up about this situation in an interview with Ellen DeGeneres.

Here’s the thing, in order to compete as an ice dancer, you have to learn all of the ballroom dances on the floor first and then move them onto the ice. The short dance in skating competition is usually a ballroom rhythm. Even though Meryl and Charlie’s choreography is now different it doesn’t change the fact that they both have already spent 16 years mastering dance lifts, back positions and arm holds. These little details can take days or weeks to perfect to the point of comfort and they showed up on day one already having this stuff down. That right there gives them both an unfair advantage.

As a skating fan I’m torn because I love that ice dancers are on in prime time but I can’t help but think it’s unfair. Also a great dance by Candace Cameron Bure is going to be a bigger deal for me than anything Meryl does because Candace is a novice. Seeing her do a great job is a bigger deal than watching someone that I know will nail it no matter what. What are your thoughts on this situation? Do Meryl and Charlie have an unfair advantage and if so does it matter? I think ABC is banking on fans wanting to see great performances which these two all but guarante,e but then does it really matter who wins the mirror ball trophy since it wasn’t an even competition from the start? Tell us your thoughts in the comments below!