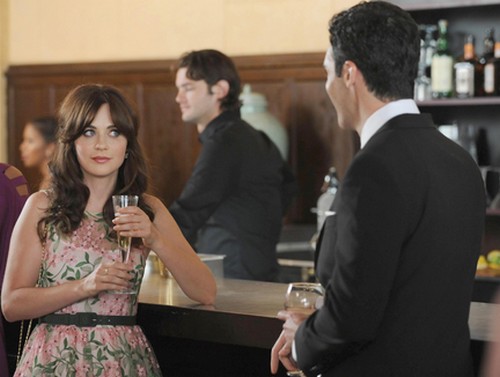 Tonight on FOX The New Girl starring Zooey Deschanel returns with an all new Tuesday September 16, Season 4 premiere called, “The Last Wedding.”  On tonight’s premiere episode season 3 begins with a visit from President Obama, but a hidden clause in the new health-care law means Woody and Steve must be sewn together to share a liver after Woody gets shot.

If you have never watched the show The show takes a modern look at friendship and romance, hit comedy NEW GIRL breezes into its upcoming third season as it follows a group of five friends, their somewhat interconnected romantic exploits and their often hilariously misguided attempts to find their respective places in the world.

On tonight’s episode at the last wedding of the summer, the gang makes a pact: Each of them will get lucky by night’s end. Jess sets her sights on the best man (guest star Reid Scott), who also has caught the eye of a beautiful scientist (guest star Biel). Meanwhile, Schmidt and Nick get an indecent proposal; Winston recovers from his police academy training; and Coach panics when he realizes he already has hooked up with every woman at the party.

Be sure to bookmark this page and come back for our live recap of New Girl season 4 premiere.  Hit us up in the comments and tell us how excited you are about the return of New Girl.

After going to eleven weddings in a row, Jess is a bit burned out. She didn’t think she could go to one more wedding. However Schmidt convinced her to risk it. He reminded her that weddings tend to be hotbed for singles hooking up. And the last person she kissed just happened to be Nick!

Jess needed this and Schmidt was able to talk the other guys into joining them on their sex quest (or arguably sex fist since Jess refuses to call them anything else). This wedding was the last wedding of summer and to be frank winter was coming. According to Schmidt no one gets laid in winter or meet new people in fall. So the deal they all made was that no one was going to come home alone.

Though Schmidt was going to ruin his chances of meeting someone new all because he caught a glimpse of Cece. She’s his kryptonite! And he would have pursued her (possibly to the ends of the earth) if he could, but then Nick had kindly reminded him that Cece has a boyfriend. He didn’t want his friend chasing after a lost cause. Yet the truth is she actually doesn’t have a boyfriend anymore and it’s just the guys that are unaware of it. Jess of course knows and simply wasn’t ready risk telling Schmidt that without some form of a safety net in place.

All we all knows he can be kind of rash with the right motivation. And his one true love is motivation enough!

So Schmidt was once again back on the prowl. Unfortunately, though most of the women at the wedding were weary of hook-ups thanks to Coach. He apparently slept with most of them and then was a jerk about it. Hence the girls Schmidt did end up finding were of the freaky kind. As in they only wanted to sleep with him if they could have a four-way with him and a friend.

Everyone hated Coach and Winston was still sore after Police Academy. So that really only left Nick as a viable option. Although, at first, Nick didn’t want to do it. He merely agreed to it later on in order to save his friend from going after Cece because by then he had found out that she was single again. But Schimdt found out about her change in circumstances anyway and he even turn down a four-way to see how things might play out with her.

As for Jess, the guy she was interested was also being pursued by someone else. And the other woman was vicious. She even locked Jess in the men’s room. Thankfully, Nick came to the rescue and he also provided much needed boost to her self-confidence.

So Jess went up to the best man and pitched her case. Sadly, for her so did the other girl and that left the best man unable to decide between them. Which is probably why they both ditched him and chose to go home with their plan B.

The other girl went home with the pastor and Jess went home with her friends. None of them scored that night but they decided to give weddings a break from now on!