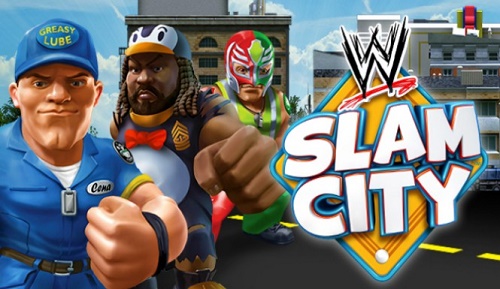 Nickelodeon and WWE are teaming up to bring WWE SlamCity to the NickSports portion of Nicktoons. The epic shortform animated series will debut during the 9-11 pm est NickSports block, which airs every Wednesday! The period of programming offers viewers a lot of great stuff, including series, specials and documentaries from leagues and key athletes, as well as acquired theatrical movies — all geared toward the athletic minded individual.

This new 26-episode series consists of two-minute shorts featuring some of our fave WWE Superstars, including John Cena®, Randy Orton®, Sheamus®, The Miz™, Rey Mysterio®, Kane® and Mark Henry®. All of them interact with a new, epic animated world. If you’re wondering what kind of shenanigans these characters could possibly get into, then be sure to check out the shows!

Keith Dawkins, Senior Vice President and General Manager for Nicktoons, TeenNick, and Nick Jr., adds, “True to the spirit of the NickSports programming block, WWE Slam City offers kids and their families a fun, fresh way to experience these exciting WWE Superstars, and the series is a great complement to our diverse, and ever expanding, sports lineup.”

Be sure to check out the series on Nickelodeon. WWE SlamCity is part of a larger initiative to expand its reach to younger demographics.

Disclaimer: CDL was not compensated for this post in any way; however, CDL is a WWE Brand Ambassador. All opinions are our own.