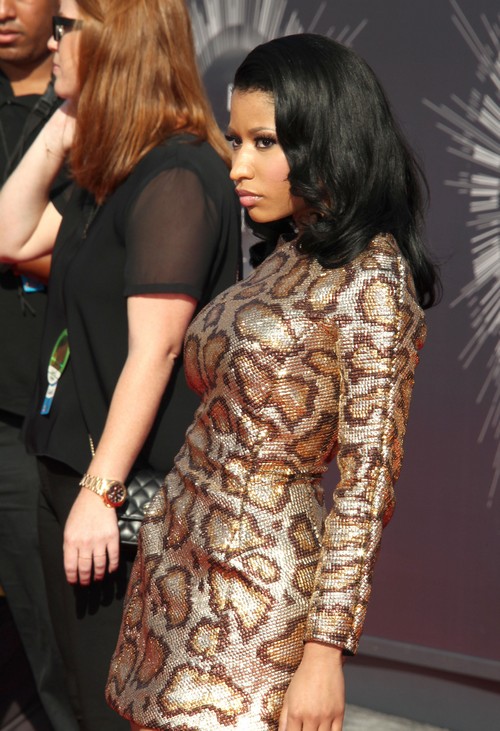 There was a lot of strutting and booties shaking as Ariana Grande, Jesse J, and Nicki Minaj gave a banging performance as the opening act for the VMAs. It was so hot Nicki had a little wardrobe malfunction. But TMZ says, just like everything else about her, the malfunction was fake. Minaj claims her dress was unzipped because she didn’t have enough time to get ready. But people who were at her rehearsal Sunday, claim it was unzipped then too. She tried it on numerous times and it just wouldn’t fit. This wasn’t the only thing happening at rehearsals, On Friday one of her back up dancers was bitten by a boa constrictor while practicing, leading MTV to ban snakes from the performance.

To clear the air Nicki posted this on her Instagram :

“God is good. As long as a nipple didn’t come out to play, I’m fine. Love my team. CASPER, Rushka, Adam, Oscar, Joyce, Gee… Many more to name but they’re all winners! No weak links. There’s no greater feeling than having ppl who inspire u and who work passionately and relentlessly to get the job done.“

Speaking of her nipples, Nicki Minaj actually had a REAL wardrobe malfunction back in 2012 while performing on Good Morning America. Other famous nip slips include Janet Jackson when Justin Timberlake “accidentally” ripped her top at the 2004 Super Bowl.

Now we all have seen Nicki’s goodies in her raunchy Instagram pics and music videos, especially her latest ‘Anaconda”, so why on earth is she trying to hide them now?

After the show, Nicki brushed it off at the Republic Records after party where she yelled to reporters “You all know I had a wardrobe malfunction” Whether or not her malfunction was accidental or on purpose her performance with Ariana Grande, and Jessie J was dope!