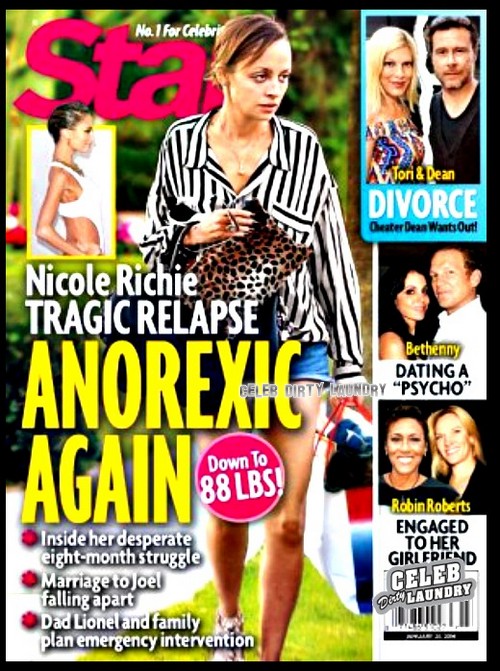 According to the latest cover issue of Star Magazine, Nicole Richie is once again dealing with anorexia, a problem that has plagued her in the past. Nicole famously admitted to dealing with the eating disorder back in 2006, where her entire frame looked almost skeletal. According to the report, it’s eight years later and Nicole’s once again down to 88 pounds. A source explains, “Nicole’s let herself go again, and it’s incredibly worrying for Joel [Madden]and the family. She is likely subsisting on about 600 to maybe 800 calories a day.” Apparently, the reason for her weight loss is because she’s feeling jealous of Joel’s relationship with Voice co-star Kylie Minogue.

Anorexia is a deep-rooted issue that doesn’t just spring up suddenly from jealousy or insecurity. However, considering that Nicole’s dealt with this disorder once before, it wouldn’t be surprising if she did relapse. The report claims that Nicole has been struggling with her weight for the past eight months, and her family is reportedly planning an emergency intervention before her weight plummets even further.

Star also has a cover story on Dean McDermott‘s marriage to Tori Spelling. By now, we all know that Dean’s a liar and a cheater, but apparently he’s the one who wants out of the marriage. I mean, he’s already kicked out, how much more ‘out’ does he want? Don’t be surprised to see these two divorce within the next year.

Star also claims that Robin Roberts is engaged to her girlfriend, although that has already been debunked. And finally, Bethenny Frankel’s new boyfriend is reportedly a ‘psycho’. What a surprise.