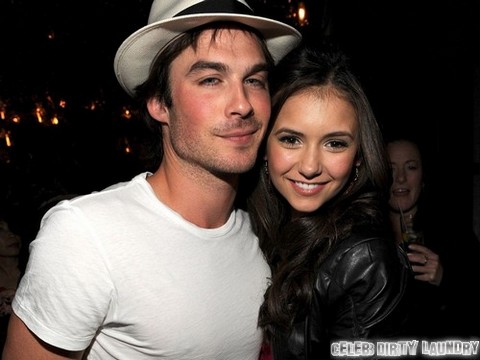 We hear the Nina Dobrev hates Ian Somerhalder and can’t stand working with him on The Vampire Diaries any longer. Can you imagine how grueling it must be to go to work every day, hating the person that you’re working with? Nina Dobrev and Ian Somerhalder used to date many moons ago [at least, it feels like that in Hollywood], but they broke up, much to the disappointment of their many Vampire Diaries fans. It took them both a while to move on, both with rebound girlfriends/boyfriends and long-term boyfriends/girlfriends, but they’re both at the place where they’re happily seeing other people now. Everything would be great except for one thing – Nina and Ian still have to see each other on a regular basis, and what’s worse, they still have to fake feelings for each other on a regular basis.

This is the problem with falling in love with your romantic interest on a television show, a problem that only actors are plagued with. While the writers on The Vampire Diaries have done everything in their power to limit the amount of romantic interactions that Nina’s character [Elena Gilbert] and Ian’s character [Damon Salvatore] have on the show, they are still the show’s biggest fan favorite coupling. That means that no matter what, Damon and Elena, and consequently Ian and Nina, will have romantic scenes together.

Even that might be bearable, but sources tell us that Nina has come to actively dislike working with Ian, and has been telling people that she hates their scenes together. Whether that’s true or not, we can’t say, but we can confirm is that their romantic chemistry might suffer from it. You can’t actively dislike a person and just fake your way through it, even though many actors do it all the time. But to a well trained eye, Elena’s and Damon’s romantic scenes will definitely feel different – but let’s see if any of us can actually spot the differences.