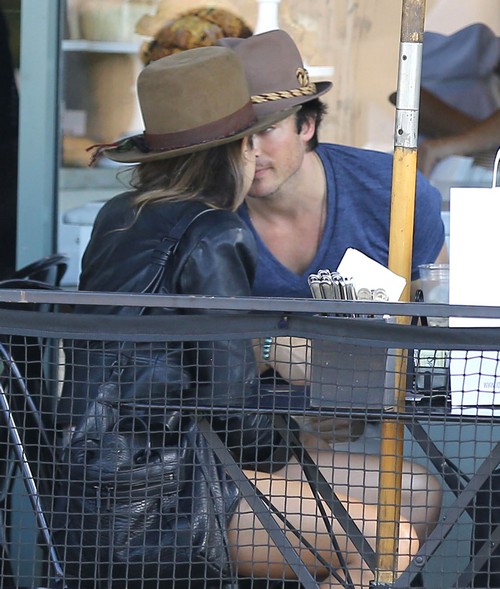 You know, the real-life drama on the set of The Vampire Diaries could almost mirror the drama on the actual show itself. Sure, there are no vampires in real life, but awkward love triangles? Plenty of them. See, Nina Dobrev, Ian Somerhalder, and Nikki Reed are somewhat involved in an unspoken stand-off. Ian’s relationship and constant PDA with Nikki has caused most of that tension, where Nina is now left watching her ex-boyfriend [of many years] rub his new romance into everyone’s faces, including hers. Can you blame her for wanting to leave the show?

Now, don’t worry too much folks – Nina has to finish this season as per her contract, but after that? It’s fair game, especially since Nina’s budding movie career is slowly taking off. I’m sure the network would love to continue the show, since it’s still one of their most steady performers. It may not bring in magic ratings, but trust me, it won’t even bring in what it’s doing without Nina Dobrev. Elena makes the show, so if we say adios to Nina Dobrev, we say adios to everyone else.

Keeping that in mind, I’m not surprised that the producers have accommodated the awkwardness and arranged for Nina to have minimal love scenes with Ian this season. Instead, [spoilers], Nina’s character has been brainwashed to forget all about Ian’s character, which has led to her getting closer to her first love on the show, Paul Wesley’s character. This way, everyone wins – except for Delena fans, that is.

What do you guys think? Will Nina Dobrev quit the Vampire Diaries after this season wraps up? Or will she sign on for a few more seasons? Will she choose a steady paycheck, or will she take risks in her career? Let us now your thoughts in the comments below.