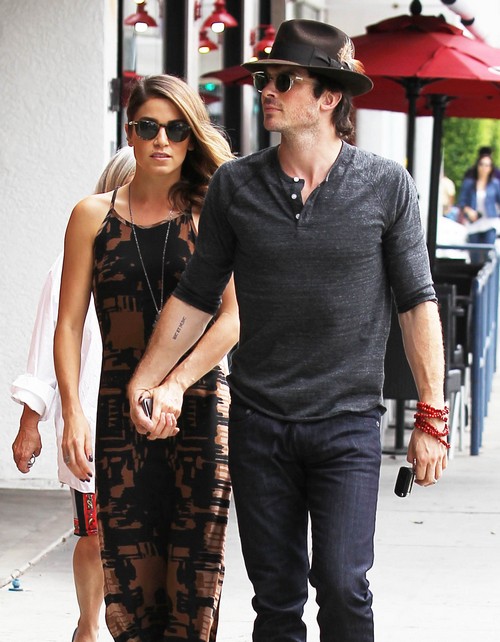 Nina Dobrev and Ian Somerhalder have struggled through their relationship for the better part of two years now, which isn’t that shocking. They were reportedly fighting a lot towards the end of their relationship, and since then, they’ve been forced to work together on The Vampire Diaries without having the benefit of recovering from their breakup. Basically, the whole Ian Somerhalder/Nina Dobrev relationship continues to land under a large question mark, especially since all the rumors continue to claim that they are very, very awkward with each other.

On the one hand, it makes complete sense for exes to be awkward with each other, especially when they have to continue playing love interests. Lucky for them, they have some really nice writers on The Vampire Diaries, who wrote the majority of the Season 6 arc [at least, the beginning] with Ian’s and Nina’s characters apart. The actors are probably hoping that some time apart will do them good, especially since Ian continues to flaunt his new relationship and his new girlfriend, Nikki Reed, in everyone’s faces. Nina already has the raw end of the deal in this situation, but I’m sure that wouldn’t make it any easier nor any less awkward. But at least this way, she knows that she’s done after this season, once and for all.

Nina Dobrev is actually one of the few TVD stars that has a legitimate film career after this show, considering she’s young, she’s hot, and she’s got a modicum of talent. The usual 6-7 season contract of the show would have been non-negotiable when signing on in the beginning, but I doubt she’s going to stay on the show after her time is up. Not only is her movie career at stake if she stays longer, but there’s also the Ian Somerhalder feud to consider. It may not be an obvious feud, nor is it a public feud, but the silent ones are always the worst. It’s probably better for everyone that Ian and Nina go their separate ways as soon as possible.