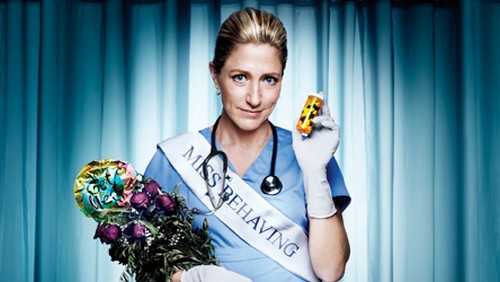 Tonight on Showtime the twisted and darkly funny NURSE JACKIE is back with a new episode called, “Pillgrimage.”  On it, Jackie steals Dr. Roman’s DEA number. Coop is recruited by a ‘sperm scout.’

On last week’s episode Jackie used drugs again, but she covered it up by attending NA meetings and regularly going to the gym, where she got pills from the locker-room towel girl. Meanwhile, Jackie is assigned to shadow Dr. Roman at the hospital, and she bonded with an outspoken Southern woman who agreed to become Jackie’s sponsor.  Did you watch last week’s episode?  We did and we have a full and detailed recap, right here for you.

On tonight’s episode Jackie tries to find a new drug source but comes up empty until Frank takes her dancing and she hooks up with a dealer. Meanwhile, Coop is recruited by a so-called sperm scout; and Akalitus wins a classic car in a poker game.

Frank kisses Jackie and asks why they can’t go out tonight. Kevin and the girls are there and she asks him to go take his shower. He doesn’t. Fiona jumps into her mom’s arms and Kevin asks for Grace’s birth certificate. She thought it was for her learner’s but Grace explains that she needs a passport to go out of the country to summer with friends in France. She shooes Fiona off her impatiently and Kevin asks Jackie and Frank to come by the bar tonight to talk but Jackie says they’re going out. She sends them off. Frank tells her he has witnesses so they are definitely going out. He says it’s a secret where they’re going and she tells him she hates secrets. He goes to shower and she digs out one of her secret caches and pops some pills then pops another for good measure.

At work, Jackie comes in and Thor rushes over. He tells her to come quick and she follows. He drags her outside and we see Gloria in a muscle car. She’s gunning it and tells them she won it in a poker game last night. Ike is impressed. Gloria grins like a Cheshire cat. Carrie stretches out a long leg to catch Fitch’s eye and complains that some people will do anything for attention. He pulls her loose and walks away. She’s not thrilled.

The EMTs bring in a guy that got hit by a zip car. Carrie comes into Fitch’s office and he’s dismissive but she wont go. She comes around the desk and sees he’s looking at a dating site. She asks if he knows what kind of women troll those sites and he tells her he’ll let her know. There’s a buzz and he tells her she’s due in trauma. She leaves reluctantly.

Jackie complains to her dealer that she’s out and the girl tells her she’s a nurse and to get it from work. Jackie says that’s how you get caught. Thor helps Fitch with his dating profile to make him a better catch. Thor tells him that he found his soul mate online and Fitch asks what happened with him and the mime and he says they never talked. HA! He changes Fitch’s favorite book and movie to make him more appealing.

Ike does stitches on someone and then a light bulb blows over his head. Ike apologizes and tells Zoey to clean him up and discharge him. Ike tries to use the PA system which is not working. Eddie tells him that Gloria is in the chapel and that the PA is broken and no one can hear him. Ike stomps off impatient.

Jackie talks to the guy hit by the car and tries to get information from him but he only says his wife’s name. Ike tells Gloria the PA system is down again and he just broke a light bulb over a patient. She tells him the brown out caused damage. He tells her he’s tired of all this shit and she says we have to make do. She doesn’t like his tone and he says the tone she sets is one of defeat and walks off irritated.

Jackie tells Carrie to call in an asthma prescription and Carrie asks her to dial a number. Carrie is distracted watching Fitch flirt with a cute patient. She takes the phone and finishes the prescription call. Zoey tells Ike they need to go out tonight and forget work. He tells her she sounds like Gloria. Zoey comes to complain to Jackie about how they only have sex and talk about work and then asks Jackie to double date with her. She tells Zoey that Frank is surprising her so she can’t. Zoey tells her she’s lucky.

Gloria asks Jackie to come take a ride in her new car and Jackie say she’s working. Gloria says that Ike just gave her shit for not stepping up and taking care of stuff like the PA. Jackie reassures her and says she’s making the best of what she’s got. Gloria thanks her and tells her she’s been very clear headed. Jackie waits a moment then calls the pharmacy and pretends to be Carrie and calls in a prescription for oxy. She rattles off her DA number to the pharmacist.

The pharmacist tells her later there is a 24 hour waiting period. She pretends to be in pain and he says he wishes there was something he could do for her and offers her a massage. She touches his hand and he smiles. She calls her new sponsor and meets her to tell her she hit on a pharmacist. Antoinette asks if she’s relapsed and Jackie says she didn’t come for accusations. She says she left rehab because it’s BS and that meetings are BS too. She tells Antoinette she’s all she has and she asks Jackie if there are new things at home and work.

She tells her she’s lost touch with her kids and Antoinette says her kids didn’t ask for an addict mom and that she ruined her family too and that’s how addiction goes. Antoinette says she has kids then laughs about the pharmacist. She tells Jackie she once blew a guy for a daiquiri and says shit happens. Jackie tells her it’s a bad habit and that she cheated on her husband with the hospital pharmacist.

Antoinette laughs and says she knew she liked her. Jackie comes back to work and Zoey says the hit and run still isn’t talking. Jackie shows Zoey the books she got for Grace and tells her she’s going to France this summer. Zoey tells her she knows and that Grace is so excited. Jackie looks stunned that Zoey knew and she didn’t.

Thor asks Fitch how his dating profile is and he tells Thor he’s been recruited by a sperm scout who likes his look and sensitivity and says he’s perfect for the upscale sperm market. Thor tells him he should do it and says he likes the idea of mini-Coops. Thor says he feels like today they gave birth.

Jackie asks Carrie if she got the hit and run’s history just as his wife shows up. She hasn’t. Jackie grills the wife who tells him he has heart failure. Ike pushes Carrie out of the way and he and Fitch go to work on the guy who’s flatlining while his wife calls out his name. They have him breathing again and then he’s talking.

She asks what he’s saying but the wife doesn’t know because he’s a Ukrainian immigrant. Carrie surprises them all when she translates. She tells his wife that he’s saying he has a mistress in Yonkers and fathered two strong boys and that he can’t take this to his car – then corrects it and says grave. Too bad for him, he recovers and now he has to live with his furious wife.

Fitch asks Carrie who speaks Ukrainian and she tells him her name what shortened from Romanov and she spent summers in camp in Russia. She sees his specimen kit and he tells her that his semen is highly prized. Jackie is icked out but the elevator leaves so she hears no more. Carrie asks if he needs help preparing his “specimen” and he rudely dismisses her again. He says he’s 40 and has nothing to show for it and this is his only shot (pun intended).

Zoey slides over to Jackie and tells her surprises are the best and Jackie says she’ll share that with Mrs Kapor – the hit and run patient’s wife. Zoey was talking about Frank’s plans for her, but point taken. Gloria comes in and calls everyone to her attention and tells them she can’t fix everything there. Ike asks if she called the meeting to tell them that.

Gloria says the new PA system costs 20 grand which is what she can get for the Mustang she just won. Ike tells her no and she asks what else he proposes. Ike is under the counter with tools trying to fix it and succeeds. Gloria tries it out and everyone applauds him. Then he hops on and mocks her. Zoey gets a call and says the fourth floor can also hear them. He goes back to work.

Frank and Jackie walk down a street and he tells her they’re here. He opens a non-descript door and takes her down a long hall. Several people greet him and they are at a western dance. She asks who he is and he says he’s her partner ma’am. He drags her onto the dance floor to square dance. She’s laughing and flummoxed.

Later, they speed up the calling and complexity. Jackie is hanging in there but then sees a couple of guys dealing off the side of the floor. She makes eye contact with one of the guys. She dances with him and then the dance ends. Frank tells her she did good and goes to get them drinks. She walks off with the dealer.

Jackie does a bump in the bathroom with the strange guy who tells her that his girlfriend hates the shit and she tells him her BF is a cop. They laugh about this and do some more lines. Frank is dancing and looking around for Jackie but she’s way high in the bathroom. The guy has his face in her crotch and Jackie is letting him go to town. The guy comes out of the ladies wiping his face and she follows a couple of moments later smiling. Frank is calling a dance and smiles at her. She dances up in front of the stage and smiles at him. She dances around merrily barefoot and he seems none the wiser.