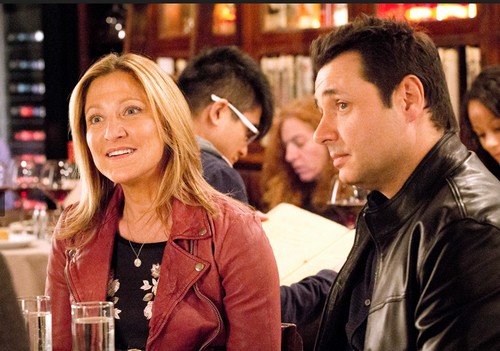 Tonight on Showtime the twisted and darkly funny NURSE JACKIE is back with a new episode called, “Rag and Bone.” On this evening’s episode, Frank searches Jackie’s house for drugs, but she removes them in time and hides her stash in a ladies room at the hospital. Later, Jackie bonds with a homeless, alcoholic nun; and finds comfort in the arms of a fellow drug user. Meanwhile, Zoey confronts Prentiss about his dissatisfaction and encourages him to do what he loves.

On last week’s episode Jackie went off the deep end when she witnessed the budding relationship between Kevin’s fiancé, Mia, and Grace. Frank disclosed a secret about his past – giving Jackie all the ammo she needed to keep him at bay. Meanwhile, back at All Saints, Akalitus’ poker streak continued, Coop and Carrie’s bond deepened when she decided to put him on television, and Prentiss got a visitor from his past.  Did you watch last week’s episode?  If you missed it we have a full and detailed recap, right here for you.

On tonight’s episode Frank throws his back out searching the house for hidden drugs. Realizing she dodged a bullet, Jackie finds a hiding place for them at the hospital. But suspicions are raised again when Grace mentions that her mother is the world’s best liar. Zoey confronts Prentiss about his dissatisfaction at All Saints. Mia and Kevin make a big announcement. And Jackie pops a surprising question to Frank.

Tonight’s episode looks like it is going to be great and you won’t want to miss it, so be sure to tune in for our coverage of Showtime’s Nurse Jackie tonight. While you wait for our recap go and hit the comments.

Frank searches the basement at Jackie’s. He looks in every nook and cranny. He checks behind the washer and then inside it too. He pulls out his back and he has to tell her that he threw his back out trying to put in free cable. She offers to get Coop to call him in a prescription and he says no. Then he tells her he saw her take the pills last night. Jackie says she’s so glad he told her. She says she’s been under so much pressure and that she caved and is so sorry.

Jackie scrambles through the house pulling out all her drugs – out of the light fixture, flashlight, on a shelf and behind a box in the the basement. There’s a bunch in her room too. She tucks them all in her bag and heads out to a meeting. She chats with Antoinette and says she’s putting off meeting Mia and Kevin because Frank threw his back out. Antoinette tells her she needs to go and says to write up a list of questions to asks her.

Antoinette gives her a bracelet to wear. She says it has magical powers. One addict is crying and Jackie says she can’t do this today. They leave. Zoe tells Jackie she was drinking last night and adopted an ape. Thor teases her about drunk donating. Jackie locks her bag with the drugs in it in her desk drawer but then Thor opens it and puts something in it and she says she just locked it. Thor says nothing locks around here.

Jackie is looking for a place to hide her pills. She goes into the women’s bathroom and is shoving the pill baggy up inside the feminine products dispenser when Carrie comes out of a stall and offers her a tampon. Jackie takes it and thanks her then takes a Sharpie and writes Out of Order on the machine.

A guy is in the ER with roller skates on and injuries. He tells Zoe and Ike that he grabbed onto a carriage in the park and hitched a ride. Zoe teases the guy and Ike asks Eddie for a tetanus shot. Eddie says all kids do dumb things but Ike says he doesn’t want to hear it. The EMTs bring in a 52 year old woman who passed out at Trader Joes for the third time.

They ask the woman – Helen – what she’s been drinking and she says not enough then says it was mouthwash. Coop asks if she’s had DTs before and she says she has. Coop orders Valium for her. Gloria comes in and asks what parrish she’s in. Gloria says that she’s a nun because they are the only ones in the world that wear those shoes. She says she’ll make some calls.

Zoe shows Eddie a photo of a pie with a Z on it then some pancakes with her last initial spelled out in blueberries. She tells him Ike can be a booger at work but is sweet, loving and kind at work. Eddie asks why she’s doing clean up on her BF’s shitty behavior. Zoe asks if that’s his dry sense of humor is actually mad. He’s mad. Zoe says he’s used to an intense work environment like in Fallujah. Eddie tells her that she’s dating an asshole.

Helen asks them to turn the lights down and Jackie puts a cloth over her eyes. Carrie comes in and freaks out because Helen is praying and they tell her she’s a nun. The nun sees her and asks why she’s dressed like that. Carrie says she liked it and it was on sale and says nuns never like her. Helen has a seizure and Coop tells Carrie the nun won’t hurt her. She comes closer and then nun projectile vomits on her. Coop says it’s minty fresh (since she was drinking mouthwash).

They hand Carrie a towel and she leaves disgusted. Zoe brings her some scrubs to change into and offers her some with squirrels. She says no animals and Carrie says she’s going to be traumatized all day. Zoe asks why she doesn’t like nuns and she says they made her cry every day of eighth grade. Carrie comes out with scrubs on and has them belted tight. Zoe says wow.

Frank lies on the sofa and the remote isn’t working. The girls come by to walk the dog and Grace tells him if he’s in pain there are probably some pills around the house. Frank tells her he pulled the same type of shit as her shoplifting stunt when he was her age. He tells her he stole a case of hot dogs and he didn’t have the same shit to deal with that she does.

He asks her about her dad getting remarried and Grace asks if Jackie is freaking out. He says no but Grace says that Jackie is the best liar in the world. She says she can be on tons of pills and act totally normal. The girls leave and Frank starts tearing apart the kitchen looking for a stash.

Zoe asks about Jackie’s dinner with Kevin and Mia. She offers to come as back up and Jackie says Frank is coming. Ike runs up and tells them to get to ER now. There’s incoming trauma and he’s jazzed. They move out non-critical patients and he says to find Roman. Thor says they have five coming but then Gloria says the crisis was diverted to St Lukes because they thought they were better prepared.

Ike blows up and says all of this is bullshit. He stomps out. Zoe comes out to find him and he tells her to let him be pissed. He says he used to know that what he did mattered and he rants out about treating punks instead of real traumas. He says everyone thinks he’s a pain in the ass and they’re right. A pigeon lands nearby and Zoe tells him that birds like him.

Jackie brings in a bottle of Ethanol and hangs it for Helen – she says it’s an old nurse’s trick. Helen says everyone thinks nuns are perfect but they’re just people. She tells Jackie that she’s 52 and living in a park. She says she just wants people to leave her alone and let her be. She says drinking makes her happy and when she’s happy she can sleep. Jackie tells her they just need to get her through the night.

Helen asks if she’s a life coach and Jackie says she’s just a nurse. Gloria comes in and says there’s no such thing as just a nurse. She also has a bottle of Ethanol and sets it down. Helen says she likes this hospital. Gloria tells her she’s got a nice warm bed for her upstairs.

Gloria calls everyone to attention in the ER. Carrie is right behind her. Then Gloria says Carrie has brought something to her attention – a relic in the bathroom that is out of order and not helping anyone. Gloria says she’s had it removed and is having hand dryers installed in its place. She looks pleased with herself and walks off. Thor asks if Carrie is wearing heels with her scrubs and Zoe chimes in and says – and a belt. Coop says it looks so good.

Jackie heads down to maintenance. She tries the door, but it’s locked. She sees the tampon machine in there and curses. She heads back up and finds Thor changing Helen’s bed. He tells her that Helen told him she was discharged. The nun is gone and the other bottle of Ethanol is too.

She’s at Gabe’s house and they snort crushed pills and drink beer. They dance around and then snort some more drugs. They kiss and she straddles him. She pushes him away. They do more drugs and she’s way stoned you can tell. She unbuttons his pants. Later, she gets dressed and he tells her she looks great. He asks if they’re going out and she says she’s having dinner with her ex and his fiancee.

She sees a jacket and asks if anyone is using it. He says his GF isn’t there and tells her to try it on. She does and it looks nice. He tells her she can borrow it. She thanks him and leaves. At dinner, she apologizes to Mia and Kevin that Frank couldn’t be there. Mia asks if the jacket is Rag and Bone and Jackie has no clue but then Frank is outside.

She runs out to greet him with a hug. He says they need to talk and she asks if it can wait until after dinner. Kevin comes out to greet Frank. Mia tells Jackie she’s sorry about the way she found out about the engagement and then compliments the girls. Jackie asks when the wedding is and Kevin says soon. The waiter asks for a drink order and they all say no but Jackie tells them it’s okay to drink around her.

Kevin says they have some news and Mia tells her that life is funny and that she loves Grace and Fiona. She says that makes their news even more exciting. She tells Jackie they’re pregnant. Jackie stares blankly. She’s hearing things through a drug filter. But then she snaps out of it and tells them it’s great. She and Frank ride the bus home then she abruptly asks if he wants to move in. He says yes. She smiles at him.