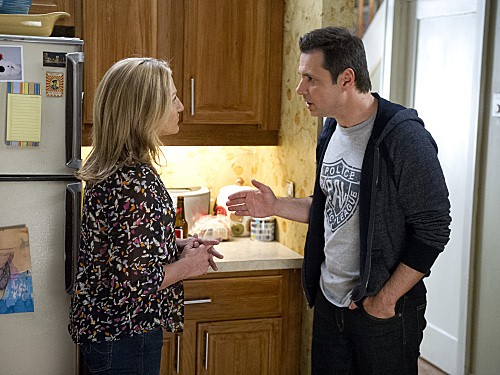 Tonight on Showtime the twisted and darkly funny NURSE JACKIE is back with a new episode called, “Jungle Love.” On this evening’s episode, Frank pressures Jackie to let him move in, but she keeps putting him off and learns a surprising secret about him. Meanwhile, Coop and Carrie bond when she puts him on TV; Prentiss gets an unexpected visitor from his past; and Jackie hosts a poker night.

On last week’s episode Coop learned that his sperm count was too low to allow him to donate; Carrie helped with a medical segment on TV; Akalitus went on a winning streak in poker; Jackie cared for a patient with severe auto-immune issues; Grace got arrested for shoplifting.  Did you watch last week’s episode?  If you missed it we have a full and detailed recap, right here for you.

On tonight’s episode Jackie goes off the deep end when she witnesses the budding relationship between Kevin’s fiancé, Mia, and Grace. Frank discloses a secret about his past – giving Jackie all the ammo she needs to keep him at bay. Meanwhile, back at All Saints, Akalitus’ poker streak continues, Coop and Carrie’s bond deepens when she decides to put him on television, and Prentiss gets a visitor from his past.

Tonight’s episode looks like it is going to be great and you won’t want to miss it, so be sure to tune in for our coverage of Showtime’s Nurse Jackie tonight. While you wait for our recap go and hit the comments.

Jackie and Antoinette sit drinking coffee stalking Kevin’s fiancee. Antoinette says it’s good info. She comes out and they says she’s pretty but then they see that Grace is with her. Jackie races over to them and tells her that Grace is being punished. Grace says – you’re fucking crazy Jackie. Jackie snatches the bag out of Grace’s hand and Mia explains that she explained that she had asked Grace to pick out a gift for Jackie as an ice-breaker. Jackie is totally embarrassed. Antoinette comes up and asks what she got. It’s a nice pair of short boots. She yells out thank you as Mia and Grace leave.

Ms Harrison is back with her baby. She’s telling them about her baby’s cough when Carrie interrupts to ask if she can change for her TV segment in Coop’s office. Jackie brings the woman and her crying baby back. Zoe tells Jackie that Grace called her and told her she went stalker ninja on she and Mia. Zoe says she approves.

Kevin calls and tells Jackie they should postpone dinner. Jackie tells him she knows she blew it. He says she’s not ready for it and she agrees that may be best. Then Jackie hears someone yelling the F word at Gloria and Jackie goes in. She interrupts the end of a poker game and Eddie tells her Gloria just won a load of cash.

Zoe is checking out a guy when Ike comes in. They greet each other warmly and he calls Ike “Peanut”. He tells him his foot fell asleep and Ike asks if he’s been tired. He says he works 13 hours a day. Mr Morgan is telling Ike stuff about when Ike was young and how he would carve lady’s initials into his fro back in the day. Ike gets cold and distant and she comes out and asks him about it but he tells her to do her job. Zoe asks what she did and Jackie tells her not to assume it’s about her.

Jackie and Coop check out Kelly and she’s got fever and a cough. Coop orders a strep test and tells her to get her a breathing treatment. He walks away but the mom says that’s it. He says it’s the proper treatment but Jackie asks him to reassure the mom.

Morgan talks to Ike about the army and says he was sorry he had to go. Ike says the day he joined the army was the best day in his life. Morgan tells him his best day was when they cut school to go to Coney Island and told people they were Kid and Play. Ike catches Zoe eavesdropping and isn’t amused. Jackie gives the baby a breathing treatment.

Frank and Jackie have coffee and she says Mia bailed on dinner. They are near a nice place that’s for lease and he tells her they could move in there. She reminds him she hasn’t even met his kids. She asks him if they can see his boys on Saturday. He tells her his kids haven’t spoken to him in a year. She asks what happens and he says it’s not important but she says it’s very important.

He says when the boys found out he cheated on their mom, they got angry and needed some time. She thinks a year is too much. She tells him he’s full of secrets and says she’s going back to work. Instead, she goes to the pharmacy and finds Carrie picking up Plan B. The pharmacists recognizes her from TV and Carrie is horrified when she runs into Jackie. She tells her she’s not going to sleep with random guys she hates anymore.

Jackie comes to the pharmacy counter once she’s gone and picks up her fake prescription. Frank calls and asks if he can come over tonight. Gloria is giving a poker clinic in the ER. Zoe and Thor want to learn her secrets. They beg her to play with pennies with them and Jackie invites them all over to play poker. Zoe says she never has people over. Jackie tells them she’s a card shark. She also invites Eddie who’s also shocked.

Carrie tells Coop she has no topic today and says that hobos aren’t photogenic. Coop says that she gets to be on TV while he has to deal with crying infants. Jackie notices there is no crying and goes into the room where the baby is. She pulls her out of her mother’s sleeping arms and realizes the child isn’t breathing. They go to work on the child and intubate her. The mom is freaking out and Jackie tells Carrie to explain what’s going on and she does. The baby starts breathing and Carrie tells the mom who is thrilled.

Zoe comes in and tells Ike she’s sorry but was excited to meet someone he grew up with. He’s looking at Morgan’s scans and she sees it looks bad. He tells her it’s bone cancer and he says he’s bringing in an oncologist but Zoe says he should hear it from him instead.

Jackie tells the mom that her daughter has RSV and says she could have picked it up by bringing her to the ER too often which is loaded down with germs. Jackie hands her the stuffed animal she bought with her drugs and also gives her a book to read. She wrote her number in there so the mom can call her if something is wrong instead of coming into the ER.

Jackie comes to the bar and admires how it’s changing. He says it’s all Mia. Jackie tells him she’s embarrassed and made a mistake. She says she’s worried that Grace is out of control and he says he wants to show her something. They go out back and he shows her he has Grace cleaning bar mats. Grace turns and glares at her. They go back in and she tells Kevin to let her have it. He says he’s not mad.

Kevin says they should just clean slate this one. He says his life is really good right now and he doesn’t want to be the reason her life goes South. She tells him he’s thinking about her a lot and he says old habits. Jackie finds Antoinette outside who asks her how it went. She tells Jackie she did well and Jackie thanks her for being there with her. She tells Antoinette she’s having a poker party for pennies with other nurses. Antoinette tells her that she was her plans for the evening and Jackie invites her along. Antoinette says she really wants to come and tells her to lie and says she’s her friend instead of her sponsor.

Carrie comes into Coop’s office and tells him she has her story and he asks if it was the baby. He says he’ll never know what it’s like to love someone that much. She tells him he saved a baby’s life and he is her story. The camera crew comes into his office.

Zoe and Ike come in to see Morgan. Zoe wheels a chair in so Ike can sit and talk and then leaves. Ike tells him he has a mass in his right shin. He tells him it’s bone cancer. He says they have to get him to the oncologist and that it’s very serious. Morgan says he’s not old. Ike says he’ll send him to the best specialists. He asks Ike who will tell his wife and he says they can do it together. He asks who can tell his mom and Ike says she scares the shit out of him. They clasp hands.

That night, Jackie brings Antoinette to her house. A motorcycle pulls up and it’s Eddie. Antoinette is excited to meet the pharmacist. He asks for a hand with the stuff he brought and Antoinette goes to help. He asks Jackie who it is and she says it’s a friend. He says she’s cute. Jackie tells him Kevin is getting remarried. He asks if it’s okay if he brought beers.

Later they watch Carrie’s segment from the hospital about Coop. Every time they say medical professional, Zoe, Thor and Eddie drink. Then they get down to playing cards. Zoe asks how long Antoinette has known Jackie and wants to know how they met. Antoinette says Zoe will be terrible at this game because she can read her face.

Frank follows her to the kitchen. She’s angry and says she can’t have lies in their relationship and tells him that Kevin cheated on her. She tells him she can’t believe he didn’t tell her about not seeing his kids. He asks if she invited all the people over to avoid talking to her. She asks to postpone the conversation and asks him to take the dog out. He puts the leash on the dog and as he starts to go outside she whispers to him that he needs to call his kids, He says he knows he does. He leaves. Jackie peeks into the dining room to make sure everyone is still at the table and then gets out a flashlight she has her drugs hidden in. She pops it open and takes several pills in a row. She puts it back together and then hides it again. Frank sees all of this through the window and doesn’t look happy!