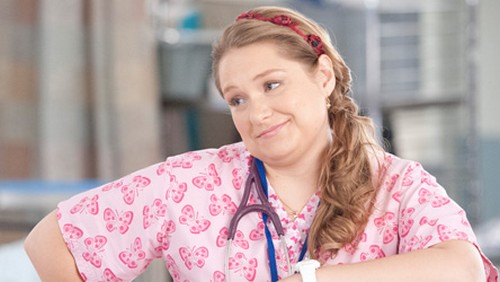 Tonight on Showtime the twisted and darkly funny NURSE JACKIE is back with a new episode called, “The Lady and the Lamp.” On tonight’s episode Jackie detoxes at home and dreams she is back working at the hospital, where she meets a mysterious patient who exposes Jackie’s greatest fear. Meanwhile, Frank objects to Grace moving back home; and Jackie makes a difficult decision concerning Frank.

On last week’s episode Jackie’s fake identity was compromised – but she had more pressing problems to deal with: she was on her last bag of pills, Frank had just moved in, and her sponsor Antoinette was hounding her about her sobriety. Meanwhile, Prentiss planned a big night out with Zoey, but their date was cut short when she suspected that something was wrong.  Did you watch last week’s episode?  If you missed it we have a full and detailed recap, right here for you.

On tonight’s episode Jackie detoxes at home – with the help of Frank, Eddie, and Antoinette – and dreams that she is back on the floor at All Saints, where she meets a mysterious patient who exposes her greatest fear. When she awakens, the worst of the detox is over: she’s on the mend. Frank raises an objection about Grace moving back home, which boomerangs back to slap him in the face.

Jackie is on her couch miserable with detox. Frank is taking care of her and Eddie is there helping. He has a bunch of meds to help her get through the withdrawal with less pain. Antoinette is also there helping and Frank thanks them both. He asks if it’s going to be hard on them and Antoinette says Jackie will feel the brunt of it. There’s a hurricane brewing in Florida and Jackie says she hopes it doesn’t ruin their pretend vacation. They change the channel to a Montgomery Clift movie and Jackie says she would run away with hi. Frank says he’s sitting right there.

The others fall asleep and Jackie creeps upstairs alone to vomit. She goes upstairs to start an IV. Eddie comes in and stops her and tells her to sit. He offers soboxyl but she says that’s just one more thing to wean herself off of. He starts her AV and says he’s going to give her a Xanax and some immodium. She lays back and tells him she’s embarrassed and starts crying. He says she never needs to be embarrassed around him. He tells her she’s going to feel like shit then it will be over. He says three days and then it’s done.

Frank comes in and tells them that Grace is outside. He says he doesn’t know what to do and Eddie says he’ll take care of it. She’s got Mandy with her. He says he’s housesitting and dogsitting while Jackie is in Miami. Mandy asks why they are standing outside and he says he has company. Antoinette comes to the door and hugs him. The teens are grossed out. Mandy says she left her purse there and they want to come in and get it. He says he thinks he saw it on the table and Mandy is instantly annoyed. He gives them the purse but of course – no pills. He shuts the door on them.

Mandy gets irate and bitchy with Grace and tells her that she is dead to her at school. Grace says it wasn’t her fault and Mandy says she’s such a sophomore and stalks off. Jackie wakes feverish and in a sweat. She asks Frank for Eddie but he says that he and Antoinette left. She’s running 101 and she’s miserable. She wants to go to work but he says she’s staying in Miami with him. Next say, she’s awake and in her scrubs putting up her hair when Frank comes in.

He tells her she doesn’t have to do this and she kisses him and says she does. At work Zoe tells Jackie she was worried about her being in Miami in the storm. Zoe says Grace called her and was mad at Jackie again. Coop asks Jackie to help with a Jane Doe. The tatted up goth chick gives her attitude, but no name. She asks if she can call anyone and she says she’s got tats and books and doesn’t need anyone. Jackie tells her that whatever she’s done, it doesn’t matter to her.

She starts crying – there are blood tears. They think it’s sinus pressure from her flu but the girl says that Jackie is lying and is always lying. Zoe yells for Jackie and says we need you. She pulls back another curtain and sees herself in bed, wracked with fever and Frank taking care of her and humming softly. Then we see Gloria in an old-school nurse uniform pledging to the nurse’s code of ethics. She asks Jackie if she remembers it. Gloria says she’s interviewing for new nurses because shit is getting real around there. There is a hall full of white dressed nurses and Gloria says America is beautiful.

Thor comes out dressed in white with some banging shades on and calls for Nurse Nightingale and says that Gloria will see her now. A nurse with a lantern heads in and Thor tells the others to keep it to 16 bars because the accompanist will cut them off. Carrie is there, also in nurse’s white, and tells Jackie she’s decided to talk awhile in her shows because they are way more comfortable. Jackie reminds her that it’s twice the work for drastically less pay.

Coop comes in and says the Goth chick has a high white blood cell count. He’s soaked in water. Carrie asks if he was in a wet shirt contest. He says he got caught in the Hurricane. Jackie says he’s not in Florida and he says – neither are you. Jackie tells the girl that she has to be admitted and she tells her again she’s lying. She talks about her first tattoo and Jackie says she knows. The girl says not to act like she knows her.

Eddie is working the newspaper stand in the lobby and tells Jackie they’re all out of drugs. He calls out to a doctor and tells him to be careful because it’s wet. It’s Frank, dressed as a doctor. He tells Jackie she’s coming home with him, doctor’s orders. She says there is work to do and he says there is always something pulling them apart. He asks what he can do and she hugs him. They dance around the elevator and there is a chorus singing to them. The doors open and Jackie walks out of the elevator – she’s alone now.

She walks down the hall which is dimly lit with eerie green lights. We see Zoe laughing and she tells Jackie that she’s ready to see you now. It’s now Grace in place of the Goth girl. She’s the same but all tatted up. Jackie says she wants another chance and Grace says she lives in California now. She tells Jackie to quit looking at her like a victim of her addiction. She grabs her arm and the tattoos all disappear. Grace tells her she should have fought harder. They are in the chapel.

Gloria comes and tells Jackie she found the perfect person that All Saints needs. She introduces Jackie to Jackie – a younger, cleaner version of herself. Jackie is soaking in a rain shower then in an actual shower that’s green lit. Then she finds she’s in her own shower and hears the TV with the news about Miami. Antoinette comes in and asks Frank if she’s ready to eat something. Jackie comes out of the bathroom and snaps at her not to talk about her like she’s not there. Antoinette says that’s a sign of life.

Downstairs, Antoinette throws on her coat to leave when Eddie comes in the door and asks how Jackie is. She tells him she’s doing well and that she ate. He starts to head up stairs but Antoinette tells him that Frank is with her. She says she’s impressed with Frank and tells Eddie to go on home. He says it’s messed up having gun with her there and says it’s like having a good time with someone at a funeral. Jackie hides on the landing and watches them go.

Jackie calls Zoe and says they are on the next flight out. She tells her to take her time. Grace is there with Zoe and Zoe tells Jackie that Grace was worried about her. She hangs up and Grace tells Zoe how mean the girls were to her and Zoe says she’s sorry they were being assholes to her. Zoe smiles and says she remembers that feeling. Zoe says she would stand in line for the payphone during lunch with all the other friendless girls. She says it never occurred to them to just talk to each other. Grace asks what a payphone is and Zoe says the point is that if she ever got to the phone, she would call her mom and pretend she was talking to a friend.

Jackie tells Frank she misses work but he says that’s not what she needs right now. She says Zoe believed their stupid hurricane lie and he says it was romantic, like they were shipwrecked in a storm. Grace shows up and comes in. She tells Jackie that she didn’t think she was home and Jackie says they just got back. Grace hugs her crying and says – I had a really bad day Mommy. She asks if Grace wants to talk about it and she says no so Jackie offers her pancakes and she asks for them in animal shapes. She asks if she can stay and Jackie tells her that it’s her home. Grace goes to take a shower.

Frank asks Jackie if she needs help and she says she’s good. He’s worried about Grace being there on the tail end of her withdrawal and reminds her that it was Grace’s drugs. She says she called me mommy and says that Grace needs her. He asks what about Jackie’s needs and his needs. He tells her he won’t go through this again with her. She says she can’t promise him she won’t relapse again and reminds him she’s an addict. He says he needs some air and is going for a walk. She tells him to go do that.

Jackie goes and latches the door chain after he goes. Jackie pops open an oxy, pours it on her hand and snorts it. She smiles. She fixes Grace a lovely tray with pancakes and food on it and takes it upstairs.