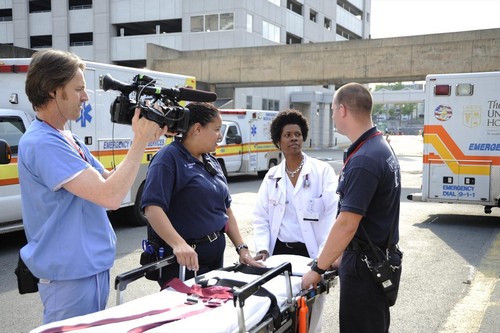 Tonight on ABC’s hit drama NY Med continues with a new episode. On tonight’s show an ER doctor treats a couple who were the victims of a violent home invasion; a former Wall Street banker reflects on changing her career to medicine; a Marine recalls his service and describes his deteriorating physical condition.

On the last episode Hugo Razo grew up in a modest home in a small California city where young Mexican-Americans like him were often pressured to join gangs. He struggled in high school and says most people thought he’d most likely end up doing physical labor of some kind such as janitorial work. But his determination to prove them wrong led him to turn it around and get on the path that would lead to his becoming a skilled ER doc at a major hospital. When a young professional couple arrives in the ER injured after a violent home invasion, Dr. Razo is the one who treats and ultimately reassures the pair that life will go on and their wounds, both physical and emotional, will heal. With his imposing stature and physique, Dr. Razo was also adept at assisting security guards when they have to subdue the occasional unruly or violent patient. Did you watch the last episode? If you missed it we have a full and detailed recap, right here for you.

On tonight’s show Hugo Fast-thinking trauma doc Ziad Sifri can’t believe his eyes when a19-year-old plane crash survivor arrives in the ER at University Hospital in Newark. The youngster was a student pilot whose instructor was killed on impact. Besides treating his patient, Dr. Sifri has to manage expectations and fears of the young man’s parents. Also at Newark, for the first time a young surgical resident, Neha Goel, must use her own hands to perform a potentially life-saving technique that machines just cannot handle. The surgical resident from Episode 201, Ashley Winter, returns to operate on a favorite patient who is suffering with bladder cancer. As a third year urology resident, Ashley is hopeful that chemotherapy will work wonders on the tumor but quickly learns that her patient will need a life-altering surgery. Ashley breaks the bad news to the patient and finds herself overcome with feelings. It raises the question of how emotionally invested a young doctor can afford to become in the outcome of an individual patient.

Newark always seems to have the toughest patients. And trauma surgeon, Dr. Ziad Sifri, was surely kept off his feet by his latest patient. A young man was involved in an ugly airplane accident. Although so far his patient has miraculously stayed awake and coherent throughout his ordeal. The fact that he is still is capable of doing so could only mean good news.

If her patient removes his bladder then it’s highly unlikely he’ll never regain an erection. So he has to ultimately decide which is more important to him – his life of his libido?

Dr. Oz is back on tonight’s but sadly he’s not in top shape. He injured his finger and after conducting an x-ray he realized that he broke it. As a surgeon he needs all of his fingers and though the broken is still functioning is it actually safe for him to continue to perform surgery?

Dr. Oz’s patient had suffered a stroke. And further testing indicated the man had a hole in his heart so that means he has to have heart surgery. Now will Dr. Oz try to perform it himself or will he assign someone else while he’s recovering?

Because the trouble with heart surgery is that the heart might not start up again. That’s why any heart surgery is a risk to the patient. Hell, surgery alone is a risk. Cutting into someone even if it’s to save them is dangerous.

Ashley’s patient managed to make it through his surgery alive. Then again he had his family there for support and he also made sure to keep an upbeat attitude. Meanwhile Dr. Oz’s patient was coming apart prior to the doctor wheeling him into the OR. That might not affect his surgery but attitude does affect recovery.

And Dr. Oz did go ahead with the surgery.

To be fair to the doctor, he was assisted by another surgeon and he worked through his own pain to ensure the safety of his patient. But pain is pain. For the most part, Dr. Alexis Halpern has to deal with pain management seeing as she works in the ER. Just to get her patients through it – she has to assign a massive amount of drugs and even that sometimes isn’t enough. So it makes you wonder – How did Dr. Oz work through a broken finger?

Dr. Alexis has to deal with a lot of the older crowd. The elderly come in after they’ve had a nasty fall and sometimes they’re understanding towards the doctors and the nurses while at other times they have been known to hide their condition from the people that want to treat them. So Dr. Alexis had to keep badgering one Hassidic Jewish man just to get him to admit that something was wrong.

Because, at the end of the day, she knows he’s suffering from stomach cancer. It’s in his file and if he doesn’t tell them what’s going on then the doctors won’t know how to treat him or if god forbid the cancer had progressed.

But that’s the stubborn for you. They would refuse treatment as long as it isn’t done the way they like. And as he’s fighting not to be checked, across town a woman is fighting for her life in surgery. She had a tumor and when Dr. Giradi went in he learned that one of her lungs was compromised.

As for Dr. Ashley’s patient, he suffered from complications after his surgery. His spirit never wavered but his doctor had feared for him all the same. And his later recovery came as a surprise even to her.

Back in Newark, Dr. Sifri, released his patient after 28 days. He is good form and slowly he’s heeling from his wounds. One of which is a reattached leg. So there can be happy news. Hospitals aren’t the death traps that for some reason many of the elderly have chosen to nickname as such.

Despite the many trials and tribulations (Dr. Oz), every one of the patients that had to endure surgery went on to survive. They weren’t any mishaps that resulted in regrettably news to the family. So, and this is just a thought, we should probably start trusting out doctors a little bit more. Like Dr. Ashley pointed out – they’ve pretty much given up most of their lives in service to their patients.